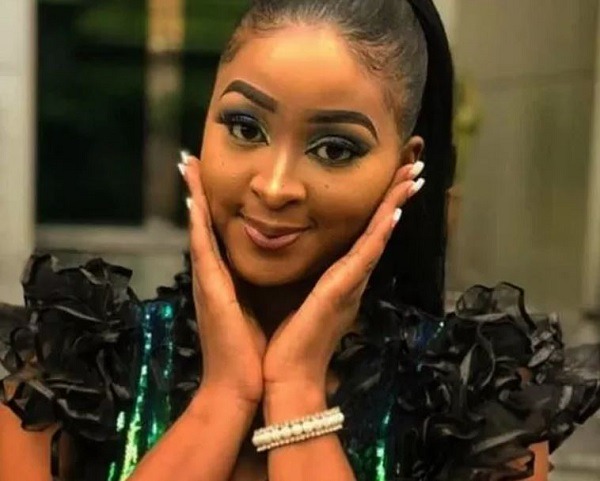 Social media was agog over the weekend when actress Etinosa Idemudia decided to stir up some controversy. The controversial lady, from whatever condition she was in at the moment decided to come on her Instagram live feed to show off her smoking habit while using the bible as her ash-tray. From the video, the Edo State-born comedienne was smoking a substance that looked like marijuana.

In the video, the actress said nobody can blame her mother for the way she chooses to live her life. She also declared the bible passage, Proverbs 22:6 a scam. Criticised by some fans for using the Christian holy book as her ash-tray, and being dared by others to try it with the Muslim holy book, the Quran, the actress threatened to mess up the book in a few seconds.

The video had since elicited outrage on social media with many throwing series of verbal assaults her way.

The young lady isn’t new to controversy. In the early part of the year, she was involved in a nude video scandal after she went on singer, MC Galaxy’s Instagram live to show off her breasts and another sensitive part while in a drunken state. Even though she later publicly apologized and asked for forgiveness for her action, her antics seem not to have stopped.

These kinds of antics are not new with many celebrities who enjoy making the news headlines and having their names on the lips of fans. But rubbishing another’s religion is taking the clout-chasing… too far. No one cares what you do for fame. Go nude, have a sex tape, engage in transactional sex, fight a colleague, that’s okay. But when you deliberately ridicule another man’s beliefs and values just to show off, then, this becomes a problem.

What Etinosa did to the Bible was utterly disrespectful. Disrespectful, not only to the Christian faith but to anyone who practices any religion and to Nigeria as a country. Christians may look away, but threatening to do the same to the Quran will definitely not receive the same lukewarm attention. Attempting such an act with the Quran will be considered disparaging and I can only imagine the brouhaha that might cause. Nigerians are very religious people and we always try as much as possible to guide our religion from interference, disregard and disrespect. The Christian faith is more liberal compared to Islam. Issues of religion are treated with caution in Nigeria as the country today is highly volatile.

In November 2002, a Nigerian journalist, Isioma Daniel, then working with ThisDay Newspaper had a Fatwa (a death sentence) issued on her life by the Islamic government of Zamfara State after she made comments that were considered derogatory to the Islamic prophet Muhammad. A few days after Daniel's comments sparked outrage, what followed were bloody riots between Muslims and Christians in Kaduna, claiming the lives of over 200 people. Thousands were injured and many more thousands of people were rendered homeless in the ensuing crisis.

Consequently, Daniel resigned from the newspaper following the uproar. Fearing for her safety and disturbed about impending arrest and interrogation by security agents, the young lady escaped Nigeria through Benin Republic and eventually exiled in Europe.

This is not a crisis Nigeria is ready to experience again, especially not for the stupidity and recklessness of one individual. She has admitted to not imbibing the home training which was given to her mother, just in case anyone decides to blame her parent for her poor character. She is a grown woman who is responsible for her every action.

While one would discourage Etinosa to desist from such attention-seeking antics, it will also be wise to consider why she is public becoming a nuisance on social media. The young lady may be going through a mental health issue and this might just be her way of crying for help. It is also possible she may be going through depression or some kind of emotional issues. I will advise her friends to reach out to her before she does any more damage to herself and her image.

Content created and supplied by: Kuffz999 (via Opera News )