Meet This Triplet Who are not Identical But are Stunningly Adorable

By Zilonaija (self media writer) | 1 year ago

Multiple births have never been cherished in the history of Africa like we do today. In fact, it once was a taboo to have twins or triplets and so on in Africa before the arrival of the white men.

In the African tradition, they earlier believed that multiple births are for lower animals like goats, dogs, rats, birds and so on, so if a woman gives birth to multiple children, her children would be killed and the woman banished from her home and the entire community. In this, they believe that the woman wants to bring evil in the land by bearing children like animals instead of a human being.

And the only way they can stop her from continuing is by excommunicating her from the kingdom/community. So it was a life and death issue when a woman is heavily pregnant with an ever protruding stomach.

But since Mary Slessor among other missionaries and colonial masters came and delivered our poor and ignorant grandparents from such blindness. Since then, multiple births have turned out to be a big blessing. You can imagine asking God for a child but he blesses you with three.

However, have you ever wondered why some twins are just too exact in resemblance that one can hardly tell one from another? Some become too identical that they even confuse their parents with whom they grew up.

Reproduction occurs when a man's sperm fertilizes a woman's mature egg. The result of this fertilization is a zygote, which develops to a foetus, until it becomes a mature baby and then delivered. But in the case of multiple births, identical twins occur when the fertilized egg of a woman breaks into two immediately after fertilization and the two half's develops separately. Because it is one egg divided into two, they share everything together in a 50-50 proportion.

But in the case of unidentical twins, a sperm fertilizes more than one egg at the same time. Note that no two eggs in a woman's womb is the same. So this multiple simultaneous fertilization brings forth unidentical children as in the picture you are seeing below.

Even though many cultures, religious beliefs and traditions still kick against scientific explanations to many natural phenomenon, it is crystal clear that their evidences holds water. 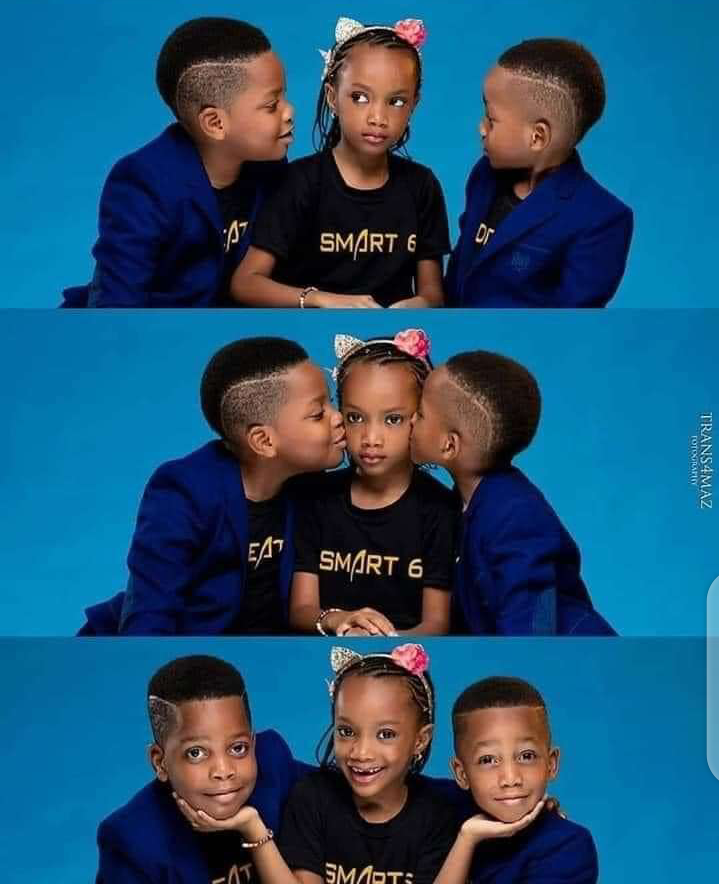 These are enviable blessings that everyone would wish to have. People always love and preffer identical multiples though, but these non-identical are stunningly beautiful that everyone loves them. And to crown it all, God made them one girl and two soldiers.

They celebrated their birthday few days ago and hence the adorable photos were shared.

May God meet everyone that is seeking such blessings in their point of need.