Sometimes it's crazy to think about how it wasn't too long ago inter-racial marriages were not only frowned upon, but criminalized. It was dangerous, forbidden, to be hidden. 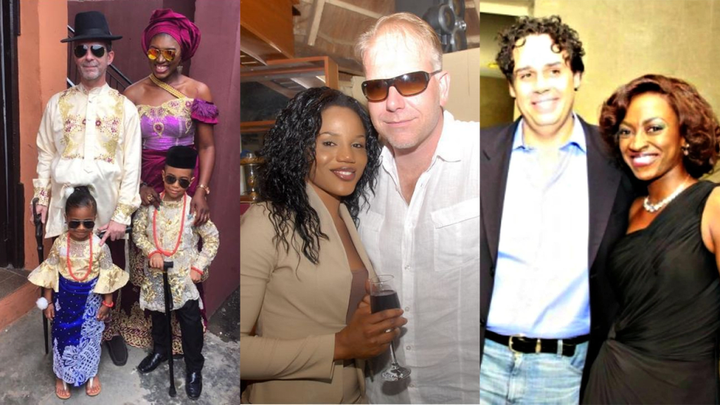 Today, that door has been broken, burned, and shattered. People from all different races, nationalities, and ethnicities are getting together. While some people still choose to raise their noses or frown upon this intermingling of people, for the most part, the world today is cool with it.

Nigerian celebrities have their pick of Nigerian men who are willing and ready to give them a liver if they asked for one. A lot of men idolize their celebrities. They fantasize about them, they pray for them, you'd think they're dating them.

But for the 12 women on this list, despite all of the attention from the men here in Nigeria, the men who caught their eyes and hearts just happened to be people who were not Nigerian.

This is a compilation list of 12 Nigerian Celebrities Who Decided to Marry Foreign Men.

Nollywood actress, Susan Peters in 2015 got married in a private ceremony to a Dutch man named Koen Croon.

Speaking about married life, she described it as "sweet and sour", saying

It is sweet and it is also sour. You tend not to do all the things you used to do because you are not single any more. It is like a check button, it is a bit different from being single

The couple welcomed their first child in 2019.

Ufuoma McDermott, maiden name: Ufuoma Ejenobor, got married to her Irish husband, Steven McDermott on 23rd April, 2010. On 23 May, 2014, she officially changed her name to Ufuoma McDermott in a Lagos High Court.

Speaking about how she feels being married to a foreign man, Ufuoma said:

"It makes no difference. There might be a bit of cultural differences but it is all about understanding and dialogue. Do lots of talking with your partner and get any issue resolved amicably".

The couple have 2 children.

The two made a beautiful couple and were cheered on by a lot of Nigerians.

When news broke in 2018 about Bucknor's death, hearts everywhere were crushed. Taking to Instagram, Aurélien posted a beautiful poem which read:

*That night, I felt I had gone. With you.N

*Nextday, I could not stand all of them there. For you.

*And then, I realized it was all love. Like you.

*Fromthen, they say I’ve been strong. It is true.

*Everyday, I stand together with all of us. To go through.

*Lastnight, I realized how much. I miss you.

*Irawomi, through the window, I look at you.

*Days and nights cannot get dark.

*A star illuminates the sky with its eternal spark

may get soul rest in perfect peace

The two have been blessed with a beautiful son.

The two keep their private life very quiet. In 2015, God blessed them with a baby boy.

The couple have 2 children.

The actress is married to American Rudolph 'Rudy' Williams, nephew of Ron Everette and grandson of Fess Williams. Together the couple have two children – daughter Teesa Olympia and son Rudolph Junior

Anita Hogan is a Nigerian actress who got married to her Dutch husband, Ted Mak in 2006. Since then, the actress has stopped appearing in any major productions.

Sadly, in 2019, it was reported that Ted Mak passed away after a brief illness.

Ashionye Michelle is an award winning actress and singer best known for her work in the movie, Journey to Self.

In August 2009, she got married to her Italian husband, Carl Raccah. The couple have been blessed with 2 children.

Nollywood actress, Chioma Toplis got married to a UK engineer, Andrew Toplis, with whom she has 3 children.

Nigerian bad girl, singer Maheeda is married to her husband whose name she's never revealed, and is based in the Netherlands with her man and daughter.

The singer said she met her husband while working in a bar in Nigeria. Upon listening to her story, he decided to help her and her teenage daughter and so they got married and relocated to Netherlands.

However, in 2011 the union crashed and the two have since gone on their separate ways, although they still share a daughter.

How do you see my article ?

Do you enjoy it ?