24 Funny Pictures That Shows Why Women Live Longer Than Men 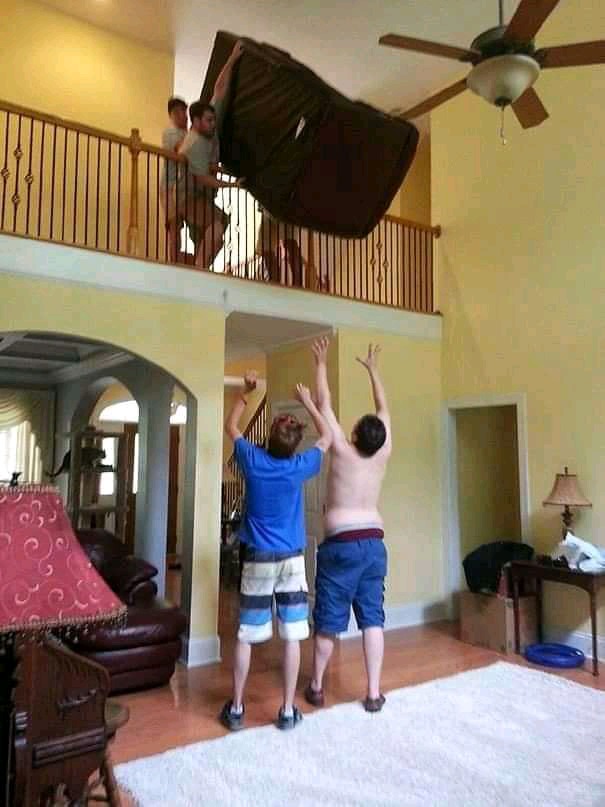 By Statistics , it is seen that the women tend to live longer than the men. Although there could be numerous factors behind it (which may include basic genetics and biology) , it also stems from the fact that men are the ones who are indeed more likely to take unthinkable risks and do crazy things .This could be when they’re just working or trying their best to finish the job given to them quickly or just hanging out with their friends and thinking of something crazy to pass the time. Indeed , men put their lives on the line in many unbelievable and mind-blowing ways.

Here are 24 pictures of men doing crazy things. One could easily agree that these are some of the factors that are contributing to the statistics.

1) Dear Men, This Is Definitely Not What People Mean By “Use Your Head”.

Apparently, this man is about to catch a heavy bulk with his head, without any protective gear. Such a fast and easy way to get serious brain damage.

2) Trying To Be Super Man

Is this guy just trying to be a marvel super hero ? He must be thinking he’s so tough sitting up there. However, just a small mistake could send him heading to the ground like an atomic bomb.

This man has got to be one of those parkour professionals who always risk their dear lives daring death by climbing all over dangerous buildings. Men are really trying. This looks so unsafe

4) Why Bother With A Rental Truck?

Can we just imagine the conversation between the two men responsible for this risky idea. “Hey, are we to rent a much bigger truck to carry it all the way home?” “No, don’t you worry about that, I’ll just have to stand in the back and clamp on it steady while you zoom off , all the way down the busy highway at 80 miles per hour.” “ okay, sure!”

5) What Was He Thinking?

This truck was caught on the highway with the back wide open and nothing but a simple safety belt to hold all of that stuff in. Plus, there’s a guy just sitting there, like everything is totally normal.

This guy must really have a death wish. He and his buddy couldn’t think of a smart and safe way to get up there, so he just leaned the ladder over the rails and decided to tie the guy to the top of it.

7) Nothing Wrong Here? Move Along

Imagine walking along the street and seeing a scene like this. It almost looks like something out of a movie, but it actually happened in a Chinese town. We hope the guy managed to get down safely afterwards.

8) The Cone Changes Everything

You have to love this picture. The guy is at the top of the tallest ladder of all time without anyone else nearby to help or any kind of safety gear, but he still took time to put out a little warning cone at the base of the ladder. Unfortunately, that cone won’t save him if the ladder falls.

This is a guy who is standing on top of an 11-story building to do some welding work. Instead of a professional scaffolding or some kind of support structure, he’s just balancing on a bit of wood.

No, this guy hasn’t accidentally fallen in. He actually got in there himself to clean it out. This is so dangerous. It must be pretty dark and scary in there too. It’s already pretty dangerous to be standing on such a tall ladder without anyone holding onto it or watching your back. To make matters worse, this daredevil has decided to precariously balance one leg over on the roof tiles. 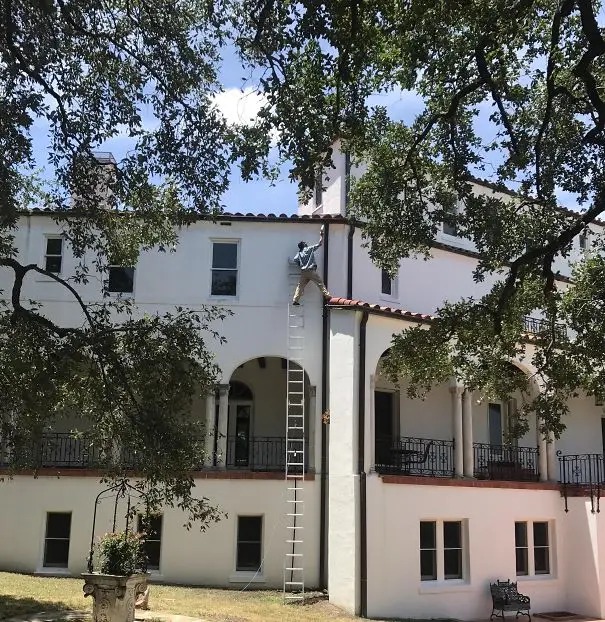 13) No Regard For His Own Safety

Apparently, this guy was drinking some beer before deciding to scale up this pole . He’s topless, without any proper safety equipment or tools at all. Some people just don’t seem to understand what the word ‘danger’ really means. 14) Innovative Use Of Ladders

We have to hand it over to these guys. They certainly got creative with the ladders here. But that doesn’t make what they’re doing any less risky. 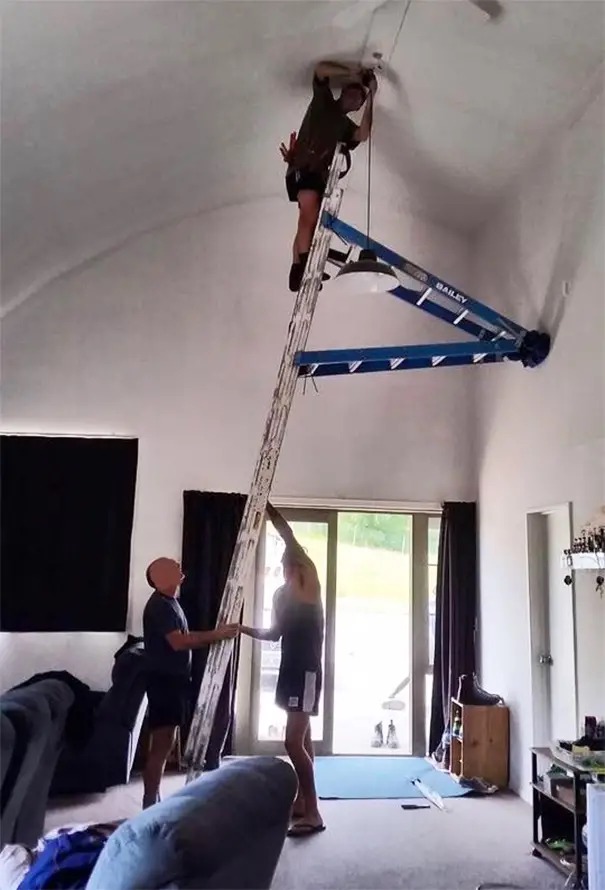 What is this guy thinking? He’s buried up to his waist in grain and he’s using a welding torch. Does he want to blow the whole place up? 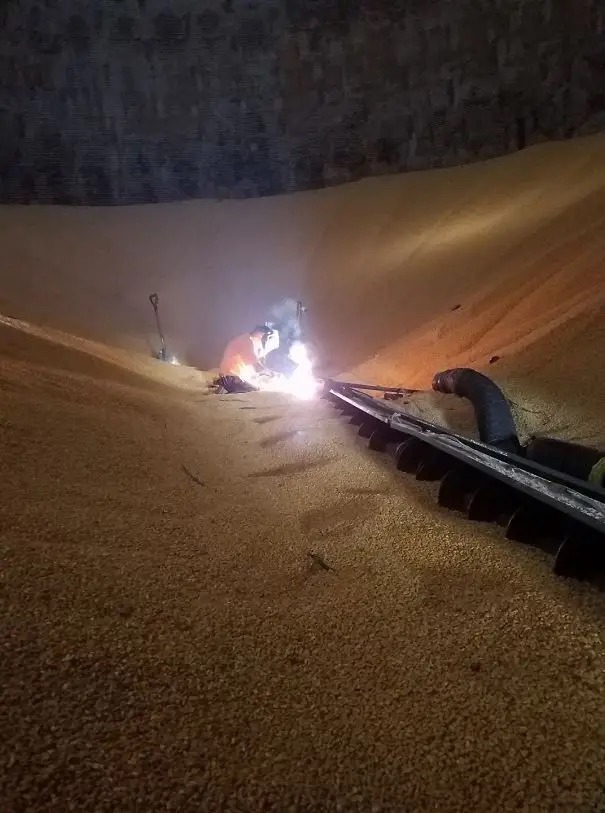 This is the sort of thing you only find in Texas. A dude is standing on the back of a truck and filling up garbage cans with gasoline. Why? We have no idea. We just hope he isn’t a smoker. 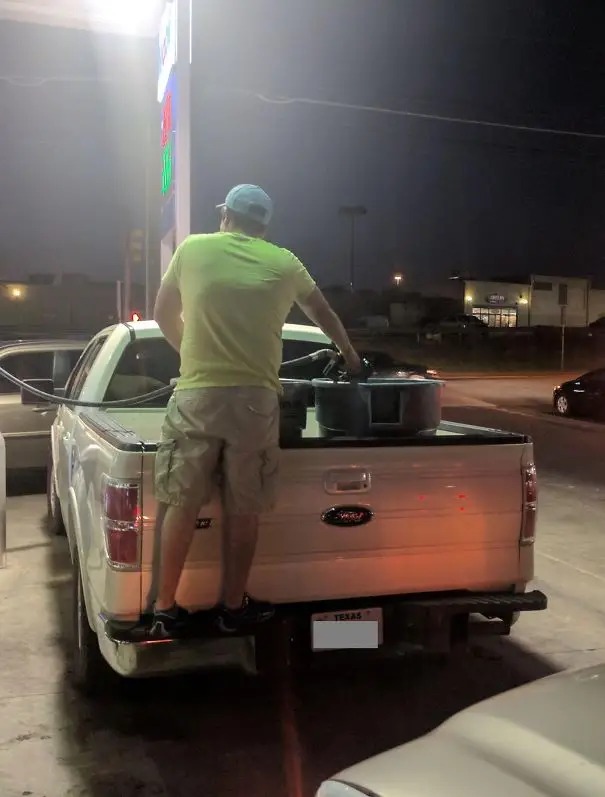 It’s always annoying at the grocery store when you can’t quite reach the items on the top shelf, but this is the wrong way to try and solve the problem. This man is standing on a bunch of wine bottles that could so easily just shatter into a thousand pieces right beneath his feet. Yes, that’s an actual guy crouching down under that storm of sparks. There’s a huge saw only a few inches away from his face, but the two workers just seem to be carrying on like everything is fine and dandy. We really hope this guy wasn’t afraid of heights while installing this AC unit. He had to go outdoors on this little ledge without any kind of safety harness to keep him from falling down to his doom below. 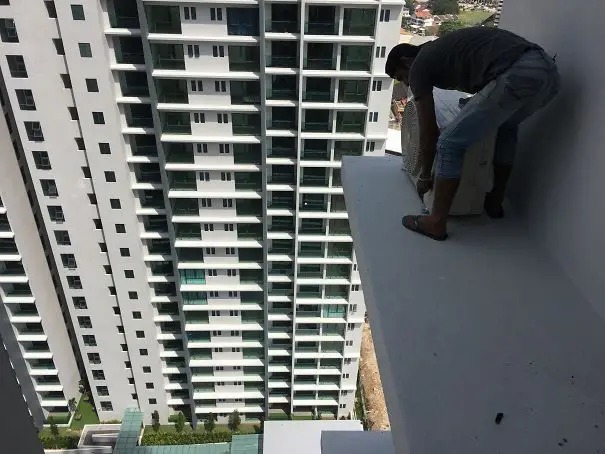 20) You Could Maybe Lower It A Little First

The whole point of those machines is to lift the car up so you can work on the underside. What’s the point of leaving it up there and putting yourself in jeopardy when you could just crank it back down? Seriously, what is this guy doing? working in a construction site? With such little regard for his own safety, he’d be much better suited for the life of a stuntman and he could probably make more money too. 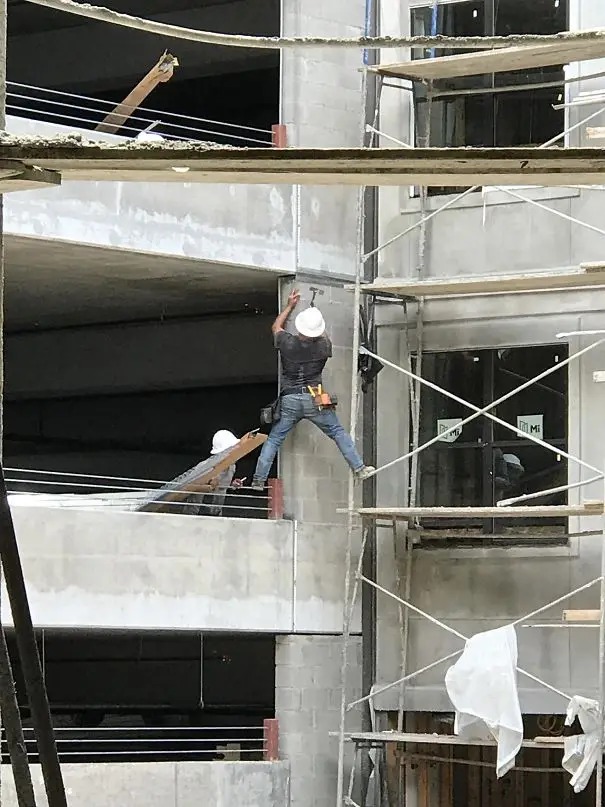 22) We Hope You Guys Have Good Salaries

These guys are literally walking across spiky bits of rebar. Every day must feel like an obstacle course for them. Imagine looking down and seeing that endless black chasm stretching out beneath your feet. Now imagine you’re standing on stilts at the same time, supported only by a little piece of wood. The technical term for a fear of heights is acrophobia, but we’re 100% sure that this guy definitely doesn’t suffer from it . How could he? He’s casually chilling out on top of two ladders while his friends watch on, ready to catch him if he falls. 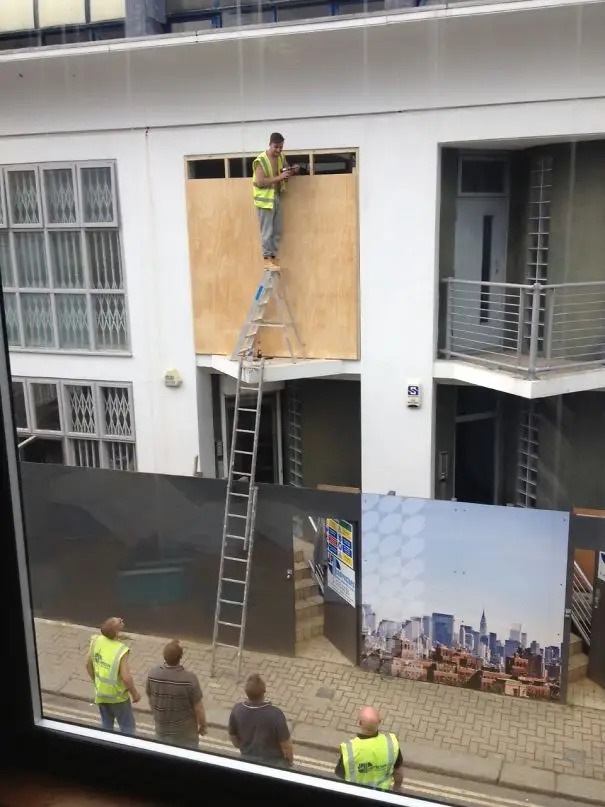 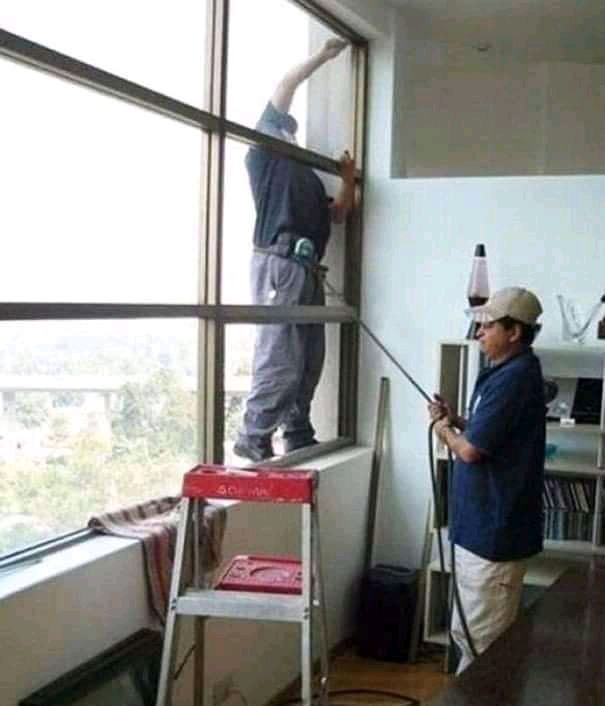 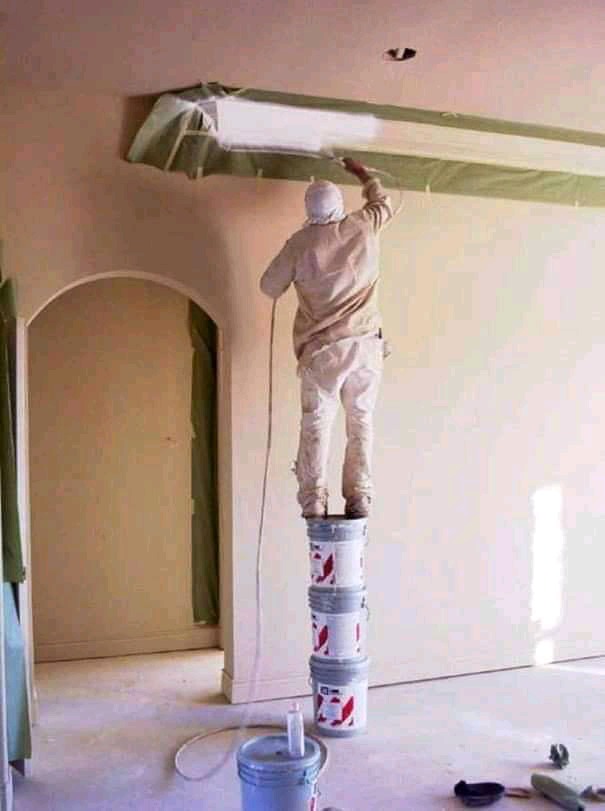 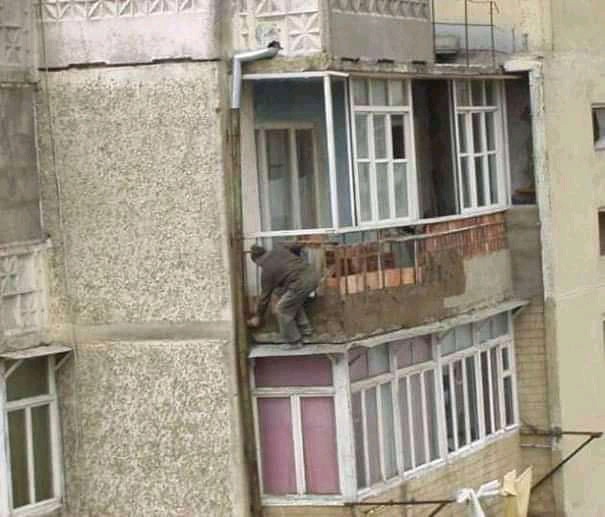 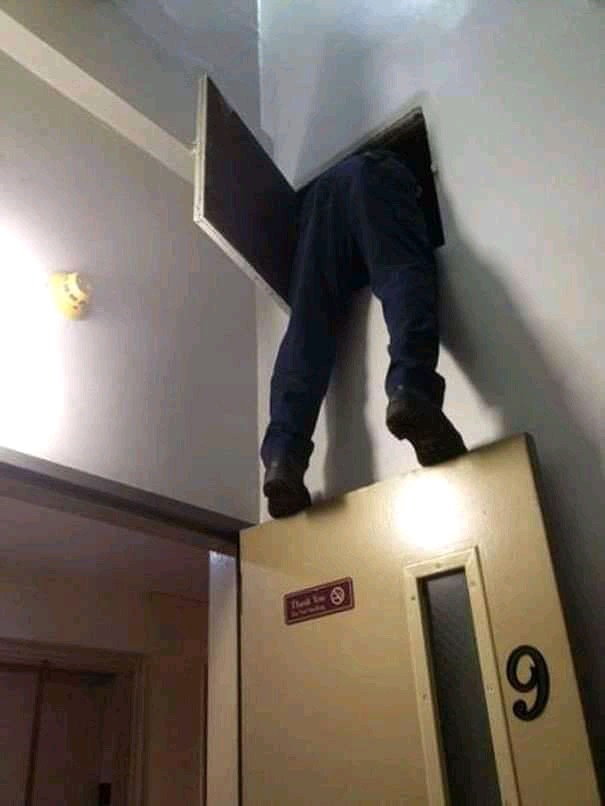