By Goodwriter (self media writer) | 2 years ago 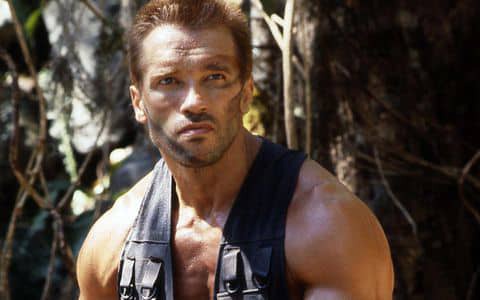 Predator may not have become a successful franchise, but the original film starring Arnold Schwarzenegger is a classic. Here's some offscreen trivia.

1987’s Predator is one of those movies that studio executives have desperately tried to turn into a franchise and, time and time again, have failed. The key to the original is its simplicity. It’s not about the lore or about why the alien is on Earth. It’s simply about one man’s struggle for survival in the face of an unstoppable evil. 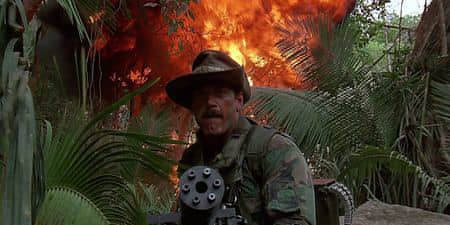 Arnold Schwarzenegger versus an alien is a premise that sells itself. That alone is enough to make any action movie fan drool, and John McTiernan’s film gets a lot of mileage out of it. Here are 10 fascinating details from the making of Predator.

After meeting Jesse Ventura, Arnold Schwarzenegger recommended him to the producers of Predator for the role of Blain. When it came to shooting, Ventura was ecstatic to hear from the costume department that his arms were an inch bigger than Schwarzenegger’s.

He challenged Schwarzenegger to a bet where they would measure their arms, and the one with the biggest arms would get a bottle of champagne. However, Schwarzenegger won the bet because all along he’d asked the costume department to tell Ventura his arms were bigger.

Predator Began Its Life As A Joke About Rocky Balboa Fighting E.T.

The original concept for Predator began as a joke. After a number of Rocky sequels, there was an inside joke around Hollywood that Rocky Balboa had run out of opponents, and he’d have to fight E.T. from Steven Spielberg’s wonderful sci-fi drama in the next movie.

Inspired by this joke, screenwriters Jim and John Thomas wrote a script called Hunter, about an alien hunter tracking down a soldier in the jungle. Originally, the story had a whole group of alien hunters from different species, but it was streamlined to be more focused — and affordable.

Having recently completed the script for Lethal Weapon, which was hot in Hollywood at the time, Shane Black was cast as a supporting actor in Predator, in the role of Hawkins. This was the studio’s way of getting Black in the middle of the jungle so that he could perform on-set rewrites if it was required.

Black didn’t like the glasses he was given to wear as Hawkins. Instead, he wanted to wear ballistic glasses that the military would issue, but director John McTiernan wanted his character to look as much like a dork as possible.

Jean-Claude Van Damme Was Initially Cast As The Predator

Initially, the plan was for the Predator to be an agile martial artist with ninja-like reflexes to contrast with Arnold Schwarzenegger’s brute force, and Jean-Claude Van Damme was cast in the role. However, the weight of the costume hindered its wearer’s flexibility, making it difficult to do martial arts.

Van Damme was unhappy with being hidden under a hot costume instead of appearing on-camera, and the producers felt that he was too short anyway, so he left the project and was replaced by the 7’2” Kevin Peter Hall.

The costume worn by Kevin Peter Hall in the role of the Predator weighed more than 200lbs. Even though Hall stood at over seven feet tall and was, for all intents and purposes, very strong, he needed to be connected to a bungee rig that would allow him to move around more convincingly.

Arnold Schwarzenegger Got Carl Weathers Hooked On Cigars On Set

For the scene close to the opening of the film in which Dutch smokes a stogie on the helicopter, the gleam of the stogie must be included after creation since wellbeing and security safety measures forestalled Arnold Schwarzenegger from lighting a stogie inside the helicopter. However, during shooting, Schwarzenegger got Carl Weathers snared on stogies.

Schwarzenegger is acclaimed for smoking stogies, however as an ex-competitor, Weathers had consistently avoided them. Schwarzenegger offered him one, he gave in, and when he delighted in it, Schwarzenegger gave him an entire box.

Predator was shot in Mexico, and the inn that the creation group was remaining in had an issue with the water refinement. This prompted the greater part of the cast and team getting the runs. The main two individuals who didn't become ill were Arnold Schwarzenegger and chief John McTiernan.

Be that as it may, both Schwarzenegger and McTiernan lost 25lbs during recording. Schwarzenegger lost the weight to play a fighter, while McTiernan essentially lost it since he maintained a strategic distance from the food on the spot.

The Predator's Blood Was Made With KY Jelly And Glow Sticks

The Predator's gloopy blood was made by blending the fluid from within sparkle sticks into KY Jelly. Thus, anybody making a Predator fan film can without much of a stretch reproduce the outsider's blood.

This basic formula implied that the team could make a huge amount of it on the set, and there were no entanglements.

As per Carl Weathers, the entertainers would get up as right on time as three toward the beginning of the day to work out and get a siphon on before every day of shooting.

Climates himself would possibly work out when different entertainers had emptied the exercise center, which permitted him to keep up the hallucination that his undulating body just fell into place without any issues.

At the point when Arnold Schwarzenegger was shooting the scenes in which Dutch is shrouded in mud to disguise himself from the Predator's warmth vision, he was shuddering continually. The mud he needed to wear all over his body — which was really earthenware mud — brought down his internal heat level. Furthermore, the conditions were freezing cold in any case since they were shooting these scenes around evening time.

Schwarzenegger attempted a couple of various measures to warm himself up, incorporating encircle himself with lights, which dried out the mud, and drinking Jagertee, a schnapps blend, which just got him alcoholic.

Content created and supplied by: Goodwriter (via Opera News )