By Tohvirah_Daniel (self media writer) | 4 months ago

The Big Brother Naija Shine Ya Eye housemate, Hazel Onou, who is popularly known as "Whitemoney," yesterday had revealed that God gave him the name "Whitemoney." The 29-year-old businessman made this known yesterday on the day 39 of the reality TV show during a conversation with one of the housemate, Queen. 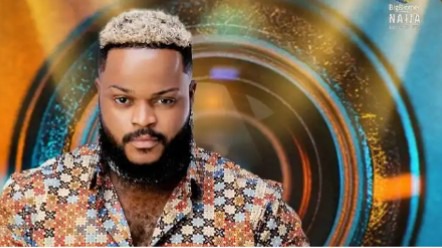 Yesterday, the duo were working in the kitchen when the conservation started as he was asked by Queen how the come about. However, Whitemoney surprises fans and viewers as he claimed that the name was given to him by God in a dream.

Below are their conversation:

Queen asked, "The first day I came, I asked you, why is your name Whitemoney? So what is the motivation? Why are you called Whitemoney?”

He answered “I didn’t give myself that name. It was given to me by God.”

In surprise, Queen asked, “God? But you said it was from your friends.”

Opinion: recall that few weeks ago 'Whitemoney' was earlier asked how come the name, which he answered by saying that that is what people like calling him. But when asked by Queen yesterday, he claimed to be from God which as this has shown while Whitemoney may be lying. When he was asked by queen why he lied before, he reply by saying, that was what he wanted her to know.

Whitemoney who said he prayed for the name, which he woke up with it in his mouth. Many fans and viewers have fueled speculations on why he may lying as some said he's making things to be complicated in the house.

He said “I prayed for it. I woke up with it in my mouth. Believe it or not, that’s the truth. If I tell people, they may not believe me. So I just say people gave me Whitemoney. I prayed that I needed a name that would stand out; a name that would cause controversy.”

But how truth could this be? Because he earlier said that the name was given to him by his friends. And now he claimed that is God that gave him the name. This statement is making many people to be confused while some said they are surprised to hear that from him.

What do you think about Whitemoney's claimed?

Drop your opinion in the comment section and don't hesitate to like and follow up our page to stay updated on entertainment and Big Brother Naija Reality show updates.