Nobody Will Tell You This Man Went Through All These; But Today He Is The World's Richest Man:

Nobody Will Tell You He Went Through All These; But Today He Is The World's Richest Man:

Born in Albuquerque, New Mexico, on the 12th of January 1964, Jeffrey Preston Jorgensen who is popularly known as Bezos is the first son of Jacklyn and Ted Jorgensen.

Jacklyn was just 17 years old when she got into a relationship with Ted.

Ted was a bike shop owner, while Jacklyn was a young teenager who was in secondary school(high school) at that time.

Their relationship grew to the point of so much intimacy that Jacklyn ended up pregnant for Ted at her secondary school level. Months after which she gave birth to Jeffrey.

Jeff's life was not so rosy due to the condition of how his parents met and gave birth to him, but this got even worse when they decide to part ways.

The bond between Jeffrey his mum seemed to be stronger than that of his Dad, so he lived with his mum.

Jacklyn later got involved with Mike Bezos who eventually married her. This changed the first name of Jeffrey from Preston, the name of his biological father, to Bezos.

Afters years of training and education Jeffrey became famous through his creation of a new business idea that brought him wealth. His invention of Amazon not only brought him wealth but also made him one of the most popular persons on Earth today. 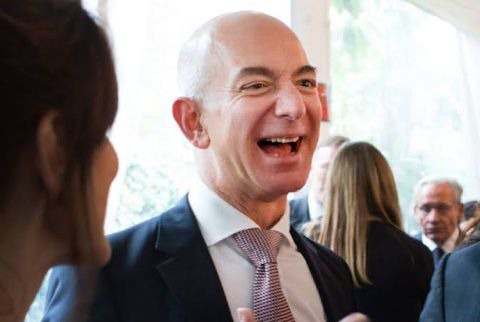 According to Forbes, Jeffrey is ranked the most wealthy man on Earth, followed by bill gate.

Do you think this is right?