Rita Dominic us a multiple award winning actress and a model. She has been the winner of many prestigious awards, and her earnings have grown a lot.

Currently,her net worth is more than 2.6 million U.S. dollars or approximately 950 million Naira, which makes her one of the wealthiest actress.

One more richest actress in Nigeria who earns millions of Naira per her roles always looks fantastic and shares her talents with all our countrymen through her movies. Being successful in films, Genevieve Nnaji has also started her clothing line and other businesses.

She earns enough to live a happy life with her daughter.This star of more than 80 Nigerian films boasts the wealth of approximately 2.3 million U.S. dollars or 850 million Naira.

Chioma Chukwuka is a beautiful multitalented actress. She has featured in over 300 movies. The beautiful actress who is known for her descent roles in movies is one of the top 20 richest actresses in Nigeria, with a fantastic net worth of about 2 million U.S. dollars. Mercy Johnson is one of the most talented actresses in nolywood. She has won several awards. The beautiful mother of three who is currently heavy with her fourth is great at what she does.

Mercy Johnson’s net worth has reached over 2.2 million U.S. dollars or 600 million Naira.

Omotola Jalade, is popular for her curves. The beautiful mother of three is a multiple award winning screen diva. The actress is good at acting and has other exciting talents such as modeling and singing. She influences many Nigerians, and she is a proud owner of many awards for her outstanding roles.

The net worth of Omotola Jalade is approximately 2.5 million U.S. dollars or about 550 million Naira.

This beautiful actress currently has more than 10 million followers on her Instagram account, which makes her one of the most followed and influential female persons in Nigeria. Each of her roles is amazing. For many movies, Funke Akindele has received awards not just within our country but all across Africa. She is known as the queen of comedy.

Her net worth is about 3 million U.S. dollars or 510 million Naira. She is one of the highest paid Nollywood stars as well. Ini is a multiple award winning actress from Akwaibom State. She is a business woman. Besides all these occupations, she is also a producer and movie director. 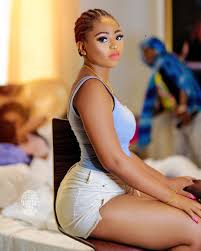 She is young and gorgeous. The young wife of Need Nwoko is a talented and the most talked about actress.

Regina Daniels is currently one of the richest and most influential teenage actresses in Nigeria with an estimated net worth of $ 400,000.