By DaveNews (self media writer) | 2 years ago

This is a fictional story intended to make you laugh.

Hi, My name is Chidi, but my neighbours call me Papa Stanley. I married about 6 years ago, and I currently have two children, a boy and a girl named Stanley and Janet, respectively. Stanley is my first child, He is currently in Nursery two. My son's 5th birthday was upcoming and I wanted to do something special for him as a birthday suprise, So I thought of throwing a small party party inside our compound, since we had enough space. I discussed things with my wife and we both agreed that I should go ahead with my plans to throw a birthday party on a Sunday. So, one hot afternoon, about five days to the birthday, I paid a visit to my sister, Beatrice, who knew how a bake very well, she was the one who singlehandedly baked my wedding cake, that goes to show you how good she is at baking. She welcomed me into her home and she served me some rice.

After eating and relaxing in her air-conditioned sitting room, We discussed a little bit and I told her that I wanted to suprise Stanley with a small birthday party and a small birthday cake, and She then asked me, If I had any cake designs in mind and I told her 'no'. Then she asked me what's my son's favourite cartoon. I thought about it for a few minutes before I answered 'PJ Masks', the reason why I gave that answer was because my son usually sings the cartoon's theme song at home. Beatrice nodded and asked me what Stanley's favourite cartoon character, because kids love it when their a design favourite cartoon character is on their came. I thought for several minutes, My son definitely wasn't into Spongebob, or Ben 10. Right then it hit me, my son liked Gecko, a character in the Disney Cartoon, "PJ Masks". So I told Beatrice that Stanley's favourite cartoon character was Gecko. We discussed about the cost of making the cake and other essentials, and Beatrice told me that She baked the cake and She will personally bring it to our house, on Sunday (My son's birthday).

My wife hired some women to cook rice, she bought some drinks. We all kept this a secret from our son, Stanley. The D-day came and after coming back from church at about 11am, I begged some of neighbours to come and move their cars out of the compound so we can have maximum space, after that, I brought some men to come and set up the canopy which I hired. The women my wife hired to cook, arrived with huge coolers of rice, when Stanley saw the preparations we were making, he asked whose party it was and I told him, it was his. He was very happy and he ran around the compound telling whoever, cared to listen, that the birthday party was for him.

At about 3pm, the MC and the DJ arrived, the chairs and canopy had been set up, and some guests were starting to arrive. Yet my sister had not arrived with the cake, I called her phone but it was switched off, and I was beginning to worry. My son asked my what kind of cake I got for him, and I told him the cake had his favourite cartoon character, 'Gecko' on it. The birthday party kicked off, the guests danced and the MC kept them entertained. Just when it was about time to bring the celebrant out, My Sister arrived with with the cake which was wrapped and she was sweating like some one who just committed a crime. The cake was placed at a well decorated table, and Stanley the celebrant was brought out, and was prayed for. The guests sang several happy birthday songs for him. Finally, it was time to cut the cake, and Stanley's face was beaming with smiles. A small cutting knife was brought and Stanley walked to the table where the cake was kept, smiling. My sister, helped unwrapped the cake, and the moment the cake was unwrapped and Stanley's eyes set on it the entire guests shouted, He began to cry and he ran and hid behind his mother, and he pointed at the Cake, telling her that he did not want the 'lizard' to 'bite' him. I was also at the wired design of the cake, suprised because Gecko, the cartoon character was green in colour and stood on his two legs. 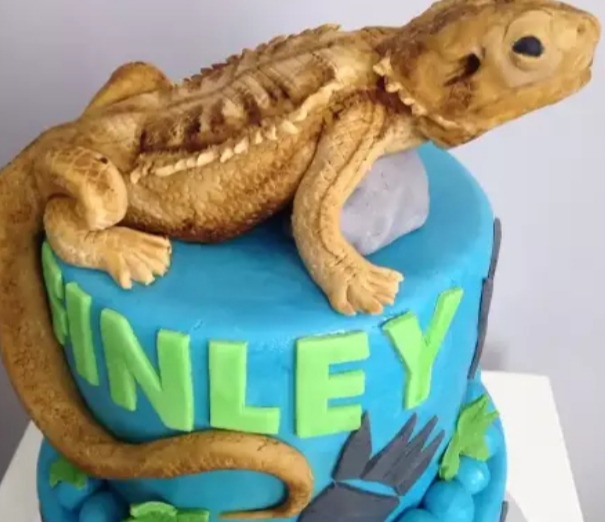 In all of this drama, my sister was so confused. I later convinced my son that it was just a cake, and after summoning some courage, he walked up to the table, and cut the cake and it was shared to most of the guests. However, he refused to eat the 'lizard' part. He just ate the blue part. After the birthday party, I began to think about the cake incident, I grabbed my phone and I searched for cakes about the cartoon character gecko, and think the cake below is what my son was expecting to see or something similar.