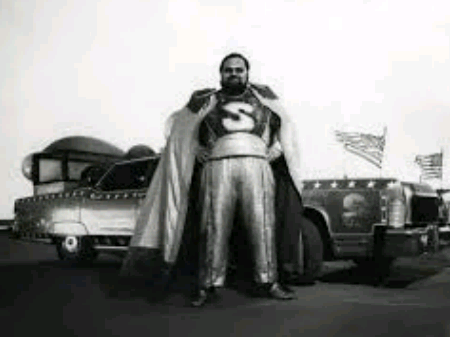 He was an independently wealthy dude who starting fighting crime in the 70s. He drove around in a custom Lincoln Continental that ā€” I kid you not ā€” shot peanut butter and jelly from cannons. He also wielded grenades filled with peanut butter.

Are you with me so far? Goodā€¦ cause here is where it gets weird.

Captain Sticky wasnā€™t much of a physical specimen. He was extremely overweight and had no martial arts skills or super powers. He did, however, fight crime. He drove around the Orange County cities in Southern California, confronting no-gooders in the streets like vandals and petty thieves. He would help people stranded on the roadside. Sometimes he got himself in trouble, and the police would have to bail him out. More of his activities were about being a champion of the people rather than fighting crimeā€¦ he was famous for exposing rotten businesses and bringing attention to assorted public safety issues. He also was a great supporter of charity, doing public events to raise money for various causes.

Captain Sticky was part crime fighter, part consumer advocate, and all showman. He loved it when the news media showed upā€¦ he would would rant (in character) about how kids should stay in school and listen to their parents. Heā€™s show up in the newspapers and on TV for his activities and causes.

They claim that he passed in 2005, but I donā€™t believe it. Like the Dark Knight, I think he retired to an abandoned cave complex to build an army of peanut butter and jelly wielding Champions of Justice. Only time will tell.