Everybody Omawumi Attacked in New Video

By Supertee (self meida writer) | 20 days 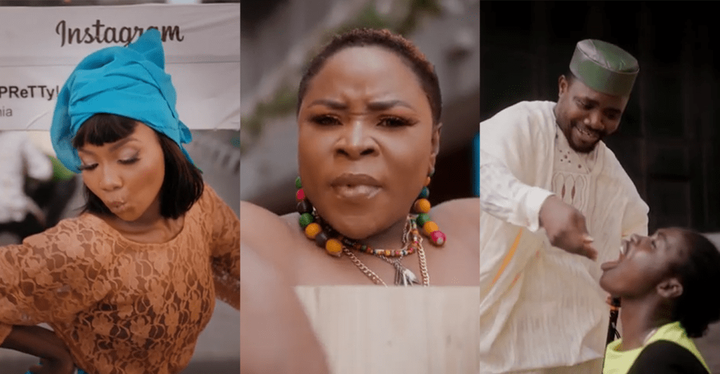 Nigerian singer Omawumi has always been renowned as one of the most prolific singers and one woman who is always happy and willing to share her opinion on the things happening around her. After a whole ten months, the singer is finally back with a new song and on this one, she’s taking a look back at 2020, the country as it is now, and all the bullshit that is happening.

The description for the song before it was even released read:

After such a Bullshit year that 2020 was, Omawumi is taking a bold step and helping every Nigerian speak up on the uncomfortable truths we are all currently experiencing. She is doing this with her new single titled "Bullshit". Bullshit is a very melodic thought-provoking song that vocalizes the struggles and plights of everyone. It is a song for everyone. Are you not tired of the Bullshit?

Then, shortly after this write-up Omawumi released the song. That was yesterday.

Today, she released the accompanying music video and let’s just say that Omawumi is throwing shots at everyone. EVERYONE! Here’s everybody Omawumi attacked in her new music video.

The first people to take punches from Omawumi in her new song and video are people in government. In the song, Omawumi sings a couple of lines about the government including:

Your government is saying bullshit

In the music video, she shows a man dressed as a politician throwing actual peanuts to a group of people who are fighting themselves. The hunger amongst the people is so bad that they even come to kneel before the politician who gladly throws peanuts in their mouth.

Also, at another part in the video, a woman carries a heavy bucket in her head. As she kneels holding the huge bucket on her head, the Politian fills the bucket with water from a bottle branded as ‘Bullshit’.

The next set of people Omawumi targeted in Bullshit are influencers. In the song, she literally sings:

Everything na wash, it's all bullshit

Then in the video, she shows off an influencer posing on Instagram. In the picture she's posing for, she puts her location as California whereas she's actually in Nigeria. A depiction of the lies a lot of social media influencers spew and the amount of fake life everywhere.

In lyrics of the song, Omawumi also addresses gossips ultimately saying that everything anybody does people will talk so all you can do is pack your bullshit and let people pack their own. She sings:

Most people are giving you bullshit

If I decide to stay naija and suffer with you

Or I decide to relocate nothing concern you

Or I decide to put injection for my breast and yansh

This year, this place no judgement zone

Pack your bullshit, make I pack my own

In the video Omawumi shows two people handing each other bullshit, saluting themselves and leaving.

This is a depiction of the constant bullshit we're all handing to ourselves every single day. Omawumi says in the song that she is tired, and this year she's just allowing everybody to pack their bullshit while she packs her own.

In the song, Omawumi sings:

Most people are giving you bullshit

Your government is saying bullshit

This is but a tip of the iceberg as far as what Omawumi addressed in this song and music video. It is such a good song and definitely one of my highlight tracks of the year both sonically and visually. If you haven't watched it yet, here is Omawumi's Bullshit.