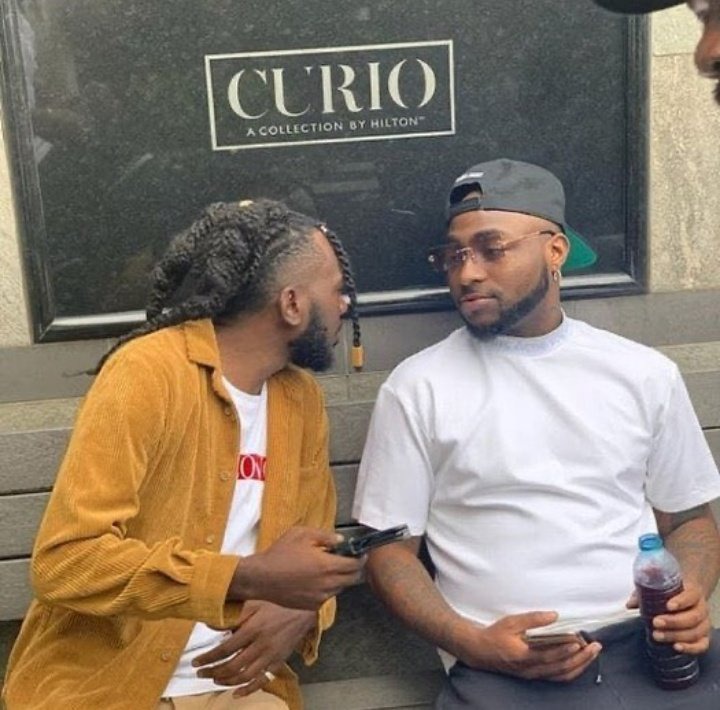 Popular Nigerian musician and philanthropist, Davido has just signed struggling artiste, May D to his "Davido Music Worldwide" record label. This revelation was made by May D via his Twitter and Instagram accounts tagging "DMW" and "30BG" his new family.

While many fans hail this generous act by Davido, some saw this move as unnecessary and very risky because May D is at a decline in his career. Do you also remember when Davido asked Cynthia Morgan to call him for help? Fans also made funny reactions as to why Davido chose May D instead of Cynthia Morgan.

However, see some mixed reactions below:

🗨️May D is a bundle of talent but signing an artiste who's been off the scene for a while is a huge risk and stupid move.

🗨️Davido is the greatest artiste alive from Africa and there’s nothing anyone can do about it.

🗨️Davido is offline and he keeps lifting people, at least you can’t call this one clout

The same people who laughed at May D few months ago, are the same people congratulating him today. Keep working and Pray for Grace.

🗨️Lmao Nigeria ass lickers call influencers like deceiving davido too much mehn. Only few of them are intelligent😁

This one said davido is the greatest of all time all because he signed May D. Not based on music, records, or impact but based on who u signed😁

🗨️MayD has officially signed with DMW and he is super excited to become the newest member of the #30BG family!!!

Davido to the rescue again. Yo!!!..."We rise by lifting others."

🗨️Imagine a world without Davido, who go dey solve all these problems?

🗨️Seeing Davido sign May D despite the fact May D being off for a while in music proves Davido is really an inspiration to people alot.

🗨️Davido is a Hero, he remain the best in and outside the industry.. you can slot put bias and hate his music but you can’t hate that guy in person..

🗨️Davido asked Cynthia Morgan to call but she no get airtime, May D borrow Airtime from MTN call Davido now he’s in 30BG

You see in this Life the Lion in you will only come out if the Parm Kernel breaks the dishonesty of the tortoise while saturating the atmosphere.

Also see some screenshots below: 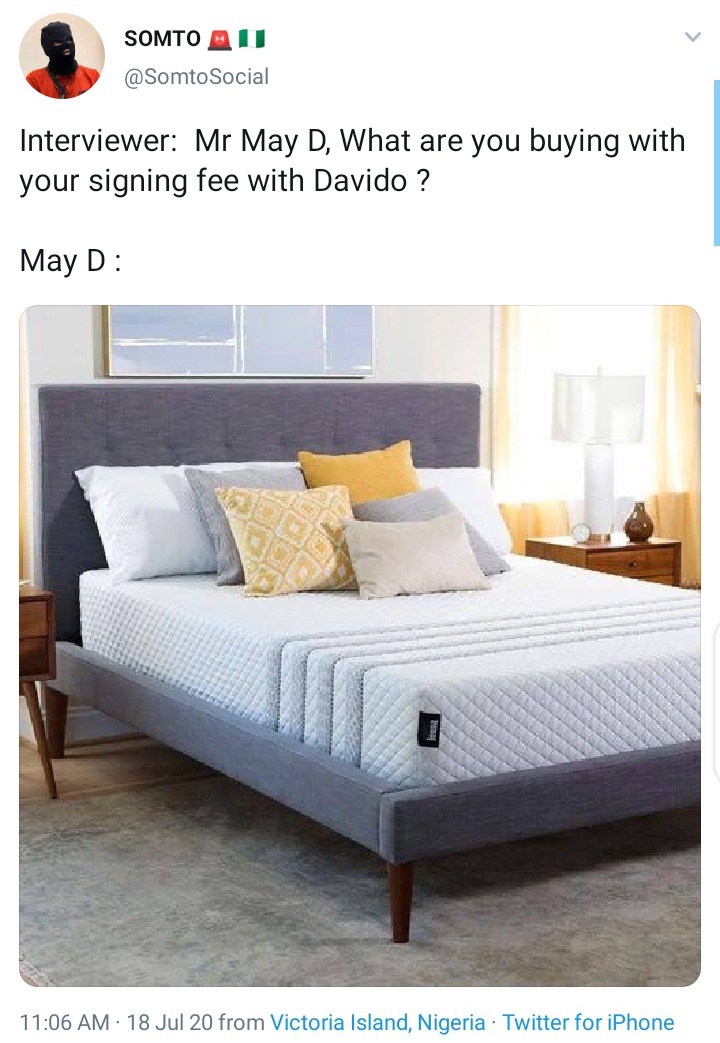 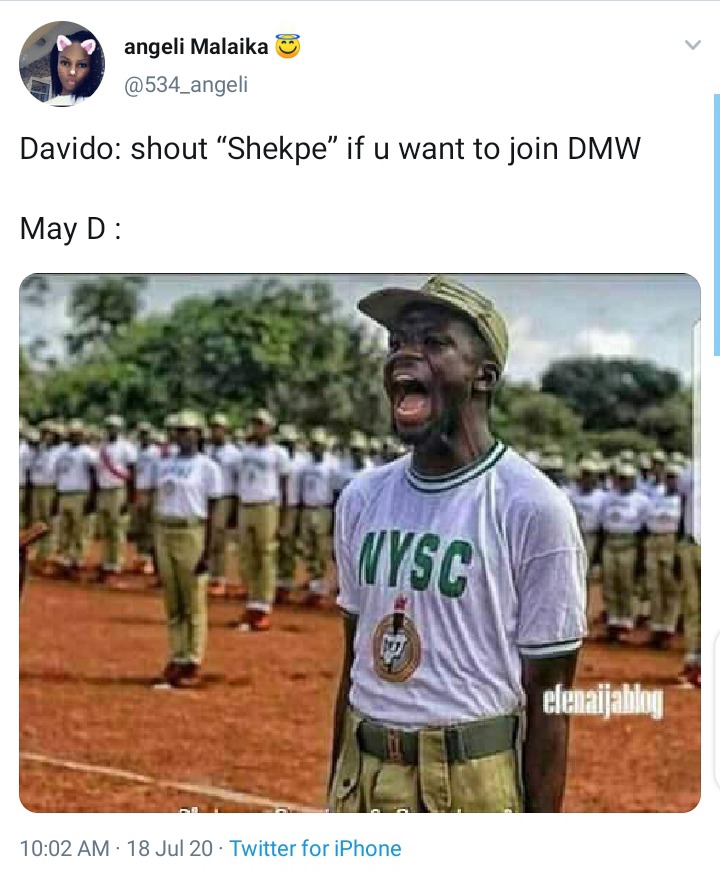 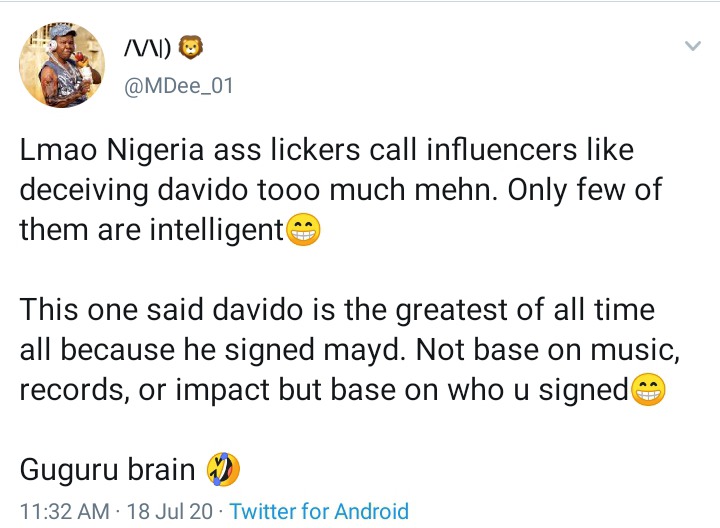 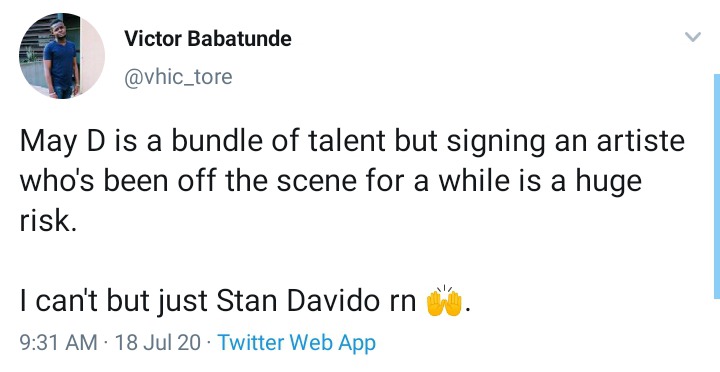 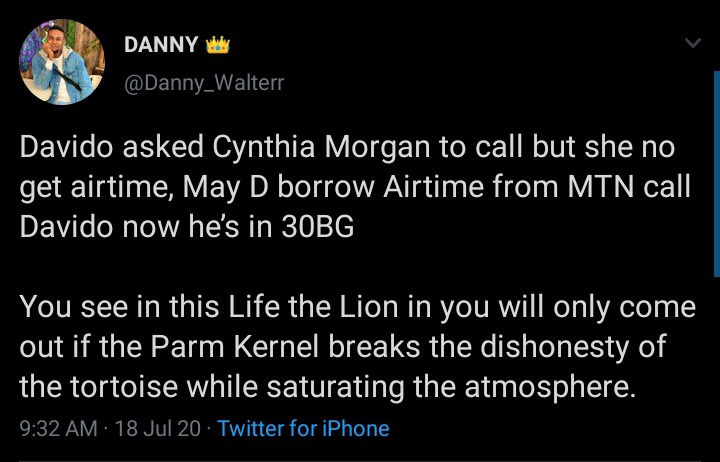