Meet Maurice Tillet: The Man Who May Have Inspired The Movie "Shrek" 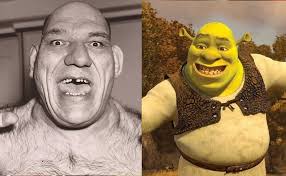 Maurice Tillet was a French boxer, born in St.Petersburg, Russia on October 24, 1903. He was professionally known as the "French angel" a nickname first given to him by his mother.

At age 17, he was diagnosed of acromegaly —a condition usually caused by a benign tumor on the pituitary gland , resulting in bone overgrowth and thickening. His head, chest, hand and feet expanded beyond normal. It was reported that he had a head almost twice of a normal man and a hand that could shuffle 3 decks of cards. His bizzare appearance made him look like a monster.

Although he completed his law degree, he chose not to practice. His condition heightened his athleticism and that lead him to boxing where he made quite a name for himself.

Maurice lived a happy but private life and was married to a beautiful woman named Olga. He surpassed the life expectancy of people suffering from acromegaly by living past the age of 30. He died on his 50th birthday of cardiovascular disease, a few weeks after his trainer had died.

Here are some of his photos: It is speculated that Maurice was the inspiration behind the cartoon movie "Shrek" because of the striking resemblance. What do you think ?