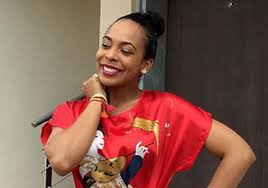 Yetunde Bakare is one of the fast rising actresses in Nollywood Yoruba.

In this post, we take a look at her biography which includes her early life, age, the movies she has featured, her family and current career as an actress.

Yetunde Bakare was born July 8 and she hails from Abeokuta in Ogun State.

The actress started her career as a model and played minor roles in stage plays before she decided to go into acting properly in 2009.

Yetunde started acting on stage in her church as a teenager but when she got into the university, she started presenting at various stage plays. She would later venture into modelling and she worked with the First Weekly magazine and some other magazines. It was while she was at First Weekly magazine that she met Kanbi Owolabi who introduced her to some people in the acting industry.

But it was her meeting with Yomi Fash Lanso that really boosted her acting career. According to the actress, she used to follow him to locations to play and just watch what they were doing and learn.

Her first appearance on TV was when she featured in the movie, Awon Okunrin. It was produced by Funke Akindele and released in 2011.

The actress also revealed that she wrote the script of the movie, Ajobi and which was her first movie script that led to a movie. She was also the lead actor and the director of the movie. It was also her debut as a director.

Here is a list of some of the movies Yetunde has featured since her debut as an actress:

She has also produced movies like Asiyan, Atunbotan, Sisi Caro, Ibaje, Modi Yi Wonlata, Mariwo, and Arinola. One of her productions, ‘Asiyan’ featured the likes of Odunlade Adekola, Madam Saje, Afeez Eniola amongst other.

The actress revealed an award of excellence from J-Krue Entertainment. She has also won the City People award for Most Promising Actress in a Yoruba movie.

The actress disclosed that producing isn’t easy as it involves spending a lot of money and you don’t get to recoup the money you spent.

She also revealed that the movie, ‘Asiyan’ was one of the most challenging movies because she had to cry a lot.

The actress revealed in an interview that her most memorable moment as an actress was when she featured in the movie, Alani Baba Labake.

In the movie, she played the role of Lanko‘s daughter who was Baba suwe’s landlord. According to the actress, there was a particular scene that was quite interesting. It was a bathroom scene and Yetunde was taking her bath while Baba Suwe’s son was peeping.

The actress revealed it was a very funny scene because people actually thought he was looking at her nakedness. Yetunde further disclosed that anytime the movie is shown on Africa Magic, people often call her, wanting to know if she was actually naked. According to the actress, there is even a joke about it, that goes like this “Won ri run mi ooo”, meaning they have seen my pubic hair.

But the actress revealed that she wasn’t naked. However, this funny scene has really helped her career as she has received a lot of calls and lots of contacts because of it.

Yetunde revealed in an interview that she is a very lively person as she loves having fun and meeting people.

She also loves travelling, dancing, swimming and drinking to ease of stress.

Yetunde reveal that she loves Mercy Johnson and Funke Akindele and she looks forward to acting in a movie with either of them soon.

The actress took to her social media page a few years ago to share a photo of her damaged car due to a ghastly accident where she escaped death.

Yetunde is a single mother and she revealed that the best thing that has ever happened to me is having her son. She disclosed that there is joy in motherhood and anytime she looks at her son, she’s inspired.

The actress revealed in an interview that she is currently single.

Yetunde revealed that her most embarassing moment was the day she was wearing a short shirt on location. She further disclosed that shirt revealed the birthmark at the back of my leg and a senior colleague noticed it and said, ‘don’t you think it’ll be nice if you can bleach a bit?’

Yetunde revealed that the experience was embarassing but she loves her skin colour and she can’t trade it for anything.

The actress revealed that sex is a normal thing that happens between a lady and a guy, it is just a way of expressing your emotional self. According to her, when you have sex it’s fun and it’s also a form of exercise.

Yetunde revealed in an interview that she was once sexually harassed by a popular actor although she didn’t disclose the name of the actor in question.

Yetunde stated in an interview that she loves people with integrity and principles as she believes this kind of people are straightforward and trustworthy.