By ThrillsNewz (self media writer) | 26 days ago 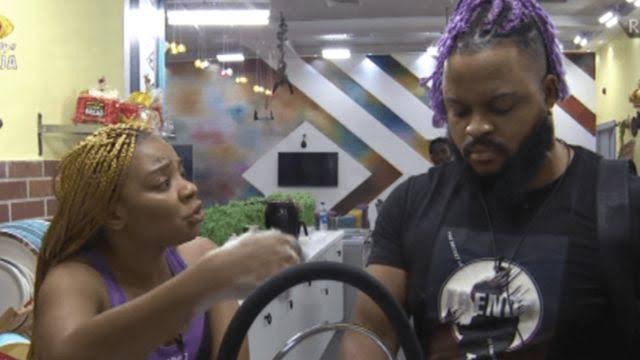 Last night, after the entire ultimate video power game, general nomination, and head of the house selection. Every housemate was quite in a good mood especially with the fact that they all agreed that was Cross was deserving of being the Deputy Head of house. Big Brother had instructed all of them to move to the garden and wait there.

In that same spirit of excitement and anticipation, they decided to engage themselves in some cruise moment. In the midst of all of that, there were some truths and there were some lies. Remember it was all about the cruise.

Right after the game, Queen was in a down mood. She wasn't excited that much and I think she took some drinks to wear herself out of her mood.

So she was laying down on the bed in the garden while the rest of the housemates were catching their cruise. It got really interesting when people in the house who have never kissed anybody started claiming that they had kissed up to 5 people or more. One of such persons is Pere and Whitemoney.

Whitemoney claimed he has kissed Beatrice, that he had kissed Peace, that he had also kissed Liquorose. Everyone was just laughing about the whole cruise.

It was a very hilarious moment and it was very obvious as well that part of the reasons why these housemates kept on staying on Whitemoney's case was because they wanted to see a reaction from Queen.

They knew that Queen was going to react to all of it, but what they did not know is that Queen does not understand how people just catch fun.

Angel seem as though she wanted to set fire to the whole matter. I love the response that Whitemoney gave to Queen when she overreacted.

It was so funny that Queen took everything so seriously. Much later she was seen on Angel's bed, reporting Whitemoney to Angel.

It was very funny how Queen kept complaining that Whitemoney might have had an affair with JMK. Another terrible thing that Queen did was telling Angel that Whitemoney warned her not to kiss Cross anymore if not he will stop his friendship with her in the house.

I don't think Whitemoney has ever made such a statement. The only advice I can remember that Whitemoney gave to Queen was that she should caution herself and try to be sober so that whatever action she takes, let it be that she is not drunk or tipsy while making that decision.

At some point, Angel told Queen that everything they said or did was a cruise, but Queen was adamant. The annoying part is that many names were mentioned that Whitemoney had kissed. Why was she dwelling on JMK's matter?

After she had finished throwing tantrums on Whitemoney, she went to the garden to meet Whitemoney.

For me, I think she is just lucky that Whitemonmey likes her genuinely. Whitemoney told her that she should allow him to care for her the way he does, but if she makes him angry, what he will say to her will not be pleasant.