By Calebzy (self media writer) | 9 months ago

Controversial crossdresser, Bobrisky has finally explained why he dresses like a man to see his dad, especially on his birthdays. 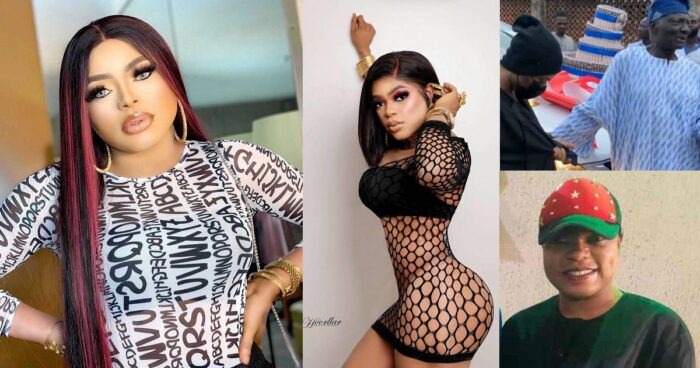 Every year the internet celebrity pays a surprise visit to his dad on his birthday, however, it appears he has a signature outfit for that occasion, a black jalamia with a face cap to match or head warmer.

On different occasions photos of him, that surfaced on the internet from his father’s birthday celebration he’s spotted dressed as a man.

While fans are of the opinion that the self-styled billionaire girlfriend reveres his dad and wouldn’t want to visit him dressed as a woman, Bobrisky in a recent interview with Chude Jideonwo revealed he dressed like a man to his dad’s birthday because he didn’t want to outshine him.

“You don’t expect me to glam up early morning to surprise my dad. I was on jalamia… .i didn’t want to steal the shine on his birthday cos he deserves the attention.” He said.

Speaking further Bob noted that although he was born a man and can never be a woman, he’s making money from crossdressing.

“Yes, I was born as a Man…I can never be a she but I’m making more money than the critics who condemn me. If you like to address me as he or she, it doesn’t bother me…

Being a woman has paved lots of ways for me, women don’t know how to use their resources as women…when I was a guy, I didn’t have money, just there hustling, they don’t even want to associate with you but I’m not in for that, I want to be a boss of my own so I chose this path and I’m enjoying it…..”

“My initial plan was to do it for a small time to make money as a crossdresser but now I’m not ready to stop cos it is paying me millions weekly.

I started cross-dressing three years ago and I have built my brand in 4 years.

I finished UNILAG in 2016, I was supposed to go for my NYSC but I didn’t cos I wanted to make money.

UNILAG prevented me from being Bobrisky cos my course advisor was tough, after I left school, I became free to live as I wanted.

Content created and supplied by: Calebzy (via Opera News )