Top five music artistes that got signed through the social media as at 2018. 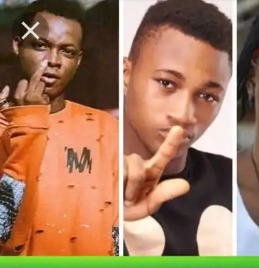 Over the year, up till this moment, many upcoming music artist has be discovered and signed into a record labels through the help of social media.

As the day breaks and goes off, people are beginning to realize the power of the social media such as for Networking, campaigns and marketing etc.so far so good the use of social media has help to revolutionized so the artiste that are signed through it.

This are some of the artist that got sighted and were signed into a record labels in Nigeria.

(1) Adewale mayowa Emmanuel better popularly known as mayorkun had his big music break five years ago when he was sighted and signed into davido's record label DMW. So Many may not know that the'mama' crooner was an 'Instagram Artiste' making covers of popular songs as he so wished. On that faithful day, Good fortune met him when he decided to make a cover for davido's hit song 'the money; a song which featured olamide. Apparently, OBO got impressed by his effort and signed him up as one the first Artiste alongside with dremo on the same Night.

The popular singer, signed to WizKids starboy entertainment is another Instagram success story. Just last five years December, Terri made a cover of DJ Jimmy jatt's track 'Oshe' which gat WizKid on it. He made the cover and tagg a list of artist as many as he could think of.

WizKid, the boss at star boy music entertainment, was drawn to his page and watched his freestyle, he like it. Boom, the next thing he was featured on 'soco' the artist got signed up.

She is the first lady that was signed to olamide label, YBNL record.the alternate singer and guitarist narrated her first contact with olamide was through social media, Instagram precisely.it is so good that the YBNL boss visited her page that faithful day, he like and watched her videos. DM was exchange and that is how she was signed.

The two street rappers, picazo ran and Yomi Blaze got their life changed for the better years ago when they were brought to light by olamide the YBNL boss.picazo made a viral rap cover to Chinko Ekun's street hit 'able God' the video went vira everywhere on Twitter,Instagram and so forth, it was believed that many loved it, the artist was sighted and got signed within 24 hours fortune smile on yomi blaze who was picazo's sidekick as he got a recording contract too.

Content created and supplied by: Polo70 (via Opera News )