Zeeworld: Sunday update on Age is just a number. 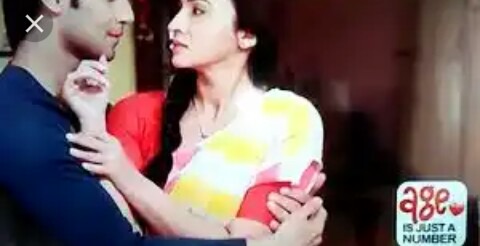 Manjila brings some guests and says to Badi Amma that see your guests are here, I invited them for the wedding. One guest says this wedding was to happen after 4 days and now its happening today, why?

Badi Amma says groom and bride wants to go to a honeymoon in foreign country and they got the ticket for today so we are doing wedding today. Yash takes guests from there. Manjila says that you lied well but I feel like some drama will happen today and you will get insulted, I have called all big people in wedding.

Vaidika and Sahil are searching Prerit’s room. Vaidika finds a papers and sees something rubbed off, she shades it with pencil and finds address of a hotel, Sahil says lets go there.

Gauri says you look so pretty as a bride, dont worry and cry, I know this marriage is happening fast, you like Prerit so dont worry. Shruti says I.. Gauri says all brides worry before wedding but it will be fine, she leaves from there.

Karan comes to Shruti’s room. He asks if she is fine? she nods. Karan says I know we never talked much but I never saw you so silent, you are my best friend’s sister, if you have any worry or any stress then you can share with me as a friend, Shruti looks on.

Sahil and Vaidika comes to a hotel room. Sahil says there is no one here but Prerit booked this room. Vaidika says we will find something. They start looking over things. Vaidika finds a suitcase. Sahil opens it and finds Puneesh’s clothes. Vaidika says it means Puneesh met with Prerit, what Prerit have to do with Puneesh? Sahil says I am sure they have some plan.

In wedding, all are waiting for Prerit’s family to arrive. Badia Amma asks Yash to call Prerit’s father Deepak, he says he is not picking up. One guest says this wedding seems fishy, its happening in haste and groom is not showing him. Manjila brings black polish and asks Badi Amma to use it to blacken her face. Badi Amma asks Yash to talk to Sahil. Yash says Sahil and Vaidika are missing, dont know what they are up to. Badi Amma says dont know what this old age woman is doing with my Sahil.

Vaidika says to Sahil that we have to find some proofs otherwise Badi Amma will not stop this wedding. Sahil throws suitcase away in anger. Intimate photos of Shruti falls out. Sahil and Vaidika are shocked to see them. Sahil says I wont spare this Puneesh.

Vaidika speaks to Sahil why Shruti feels so afraid. Sahil says Bari Amma just slapped Shruti, her marriage has been postponed. She seems fearful and it’s normal. Vaidika was worried what if something happens to Shruti again. Vaidika asks Sahil what if something bad happens to her again. Sahil says he doesn’t want something wrong happen to her again, else she will have to bear it after marriage. She told him she likes Prerit and wants to marry him; he needs to trust her this much. He requests Vaidika not to create any hurdle. Vaidika says she also wants the same, Shruti will marry but the right man.

The girl tells Karan she was Prerit’s girlfriend for the last two years, he teased her so much. He is a true bastard and must be in jail. He will spoil the life of any girl he lives with. Karan calls Vaidika to inform her.

Anjana was applying henna on Shruti’s hand and curses her brought up. She says she wanted to do a lot on her wedding, but didn’t know this all would happen in such urgency. Shruti requests Anjana to requests some time from Bari Amma. Anjana was irked and says Shruti herself agreed to this marriage. She leaves the room. Sahil comes there, Shruti tries to speak to him but recalls Puneesh’s black mailing call. She couldn’t speak to Sahil.Karan and Vaidika come to the girl, Fatima’s house so that Vaidika can also meet her. An old lady appears and denies any Fatima live there. Fatima had been tied to a chair inside.

Puneesh had held Fatima hostage. He says no matter what Vaidika does, Prerit will surely marry Shruti. He will become the groom and he will celebrate the wedding night with Shruti each night. He pays the old lady a bundle of money to take care of Fatima till tomorrow.

At Agarwal house, haldi ritual was Shruti took place. Nidhi thinks soon Shruti will become Mrs. Puneesh Tiwari 2. Shruti stands up at once and faints in the midst. They take her to the room. Sahil was with Shruti in the room when Vaidika comes to the room concerned and rubs her hand. Sahil watch her there. All at once, there was a message at Shruti’s phone. It was Puneesh, texting Shaadi Mubarik. Vaidika wonders why he sent message to Shruti.

Nidhi heard this from outside. Vaidika asks how Puneesh knows Shruti is marrying. Nidhi was happy she deleted the old messages of Puneesh from Shruti’s phone and calls Puneesh that he must be thankful to her for the favors.

There, Puneesh had scattered his photos with Shruti on his bed and thinks he will not let the fish slip from his net. Shruti’s life has to ruin, Shruti must marry Prerit no matter Vaidika’s life has to be sacrificed for the purpose. Vaidika convince Sahil that her gut feeling says there is something wrong in the wedding. Sahil says he trusts her that she can never think wrong for her family, but they have no proof and need to find it. Vaidika was worried that Baraat will be here in half an hour.

At Agarwal house, Bari Amma asks Deepak about Sahil. She questions Gauri why they brought Shruti downstairs so early.Puneesh comes inside and asks if they want to know about the truth, they will know about it right away. Everyone insults him to get away, Puneesh drags Prerit inside into Bari Amma’s feet and says he was sinful, he had illegitimate relations with Shruti and also disrespected his wife. But he vowed not to let any disgrace to Bari amma. Prerit was about to run away from wedding.

Prerit accepts that after he knew about Shruti’s affair with Puneesh he backed out, but Puneesh explained to him that Shruti was young and it puneesh’s mistake. Puneesh says he wants Shruti to marry Prerit so that he might pay off a little from his sins. He doesn’t want Shruti’s life be ruined.

There, Vaidika sense that Prerit would vanish after marrying Shruti and Puneesh would play with… they understand Shruti was being blackmailed with the photos they had found in the room. Vaidika and Sahil know the true face of Puneesh and Prerit. They hurry to share the truth to family.

Puneesh takes Shruti and Prerit to Mandap. Karan thinks something is wrong, Sahil must get a proof as soon as possible. Nidhi calls her men to stop Sahil and Vaidika from reaching the wedding.

In Aap ke aa jane se, Vaidika tries Gauri’s number but she didn’t take the call. She tells Sahil to hurry up. She was afraid what if the wedding has completed before they arrive at the wedding. Gauri stands beside Puneesh but Deepak comes to stand in between them. Anjana does the Gadh-bandhan of Shruti and Prerit.

Nidhi’s men had planted nails on the road. The types of Sahil’s car went inflated. Vaidika and Sahil come out of the car. They stood in the middle of the road helpless. Nidhi’s man inform her that he stopped them on the way, they won’t be able to reach. Vaidika takes the proof from the car and they leave by foot.

Shruti was asked to stand for pheras. Gauri comes to help her. Sahil and Vaidika run by foot. Vaidika was badly panting, the proofs fell off her hand. Shruti was being instructed to lead the wedding pheras. Puneesh devilishly smirked.