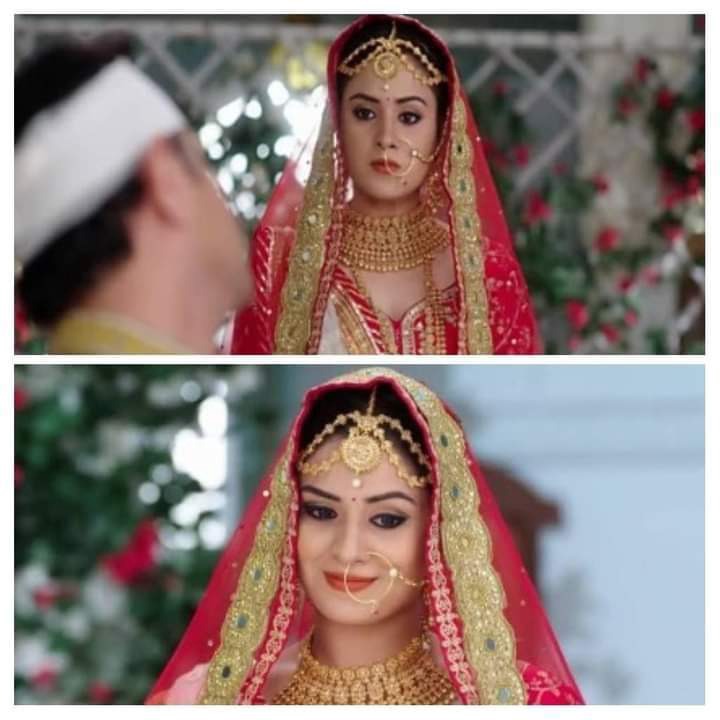 Avantika tells Rekha she is unaware why Vaidika did so, she agrees to do anything for Rekha and to resolve the problems of this family. Rekha was appreciative of Avantika. Sahil stops Vaidika. A lawyer comes with papers of divorce. Vaidika takes the file to sign it. Avantika and Rekha smirk.

Avantika asks Vaidika why she did this, this family was a respectable one. Vaidika asks Sahil to sign the file. Sahil throws the file, not ready to divorce her. His marriage isn’t any joke. She protected his sister, she can never hurt his father. She is his wife, he won’t let her leave. Avantika was frustrated of their love affair.

The assistant says alright, then he can prepare papers to name all the property after the Trust. Vaidika tells Sahil to sign the papers and stop his family property from going to trust. And she will take alimony for her luxury as well. Sahil wasn’t ready. Vaidika says if he loves her, he must sign the papers.

Love must be affair of youth, but she doesn’t want to live with him without any money. Sahil finally signs the papers and says he did this only because he loves Vaidika. He can even sacrifice his life for her. Vaidika hands the papers to the lawyer.

Sahil asks Rekha if she is happy, his life has been destroyed, his love snatched. Rekha looks away. Avantika was happy that her trick worked.

Both Vaidika and Sahil cry for the breakup and divorce of their relationship.

At night, Rekha sat with Shashi and says Vaidika has left the house, the one who tried to kill him and held the greed for their money. Shashi thinks Rekha is at wrong and destroying her own house by herself. He feels helpless.

Rekha says now Sahil and Avantika will be married. Sahil comes there and reminds Rekha this won’t happen ever. Sahil clarifies to Rekha that he is only related to Vaidika. He won’t marry anyone else other than Vaidika. Rekha asks if he would still support that criminal Vaidika. Sahil forbids her call Vaidika a criminal. Rekha asks Sahil if he still holds Vaidika dear to her or his father. She was sure Shashi could also not say so. Sahil was sure his father had accepted Vaidika as his daughter in law. He convinces Shashi to speak that he accepted Vaidika. Shashi was helpless and only cries. Rekha tells Sahil to save their family now.

Avantika was ready as a bride. Prem Pratab comes to Avantika and convince Avantika that this isn’t right. Avantika says the proposal was for her. Vaidika had grabbed Sahil. And Vaidika married Sahil only for money, but nothing else. She even tried to kill Shashi. Prem Pratab says they can’t be a part of this marriage.

Avantika thinks no matter her parents aren’t a part of this wedding, she can’t give up on what was gained through a huge game. She comes for the wedding all alone. Rekha welcomes Avantika.

Vaidika sat in the temple. She was alone, and asks God why They snatched Sahil from her, after granting her the happiness of his love, care and all the understanding and respect. She wanted to share her heart out with Sahil, but her life situations came at a verge where she must not sacrifice her life. Till when woman must sacrifice her life and happiness for the sake of family.

Manjolika comes to Vaidika and asks which wife leaves her husband so easily. Someone played a trick over her, and she fell prey to the shrewdness. God had sent her to Sahil and united them, she separated herself from Sahil. She is going against God’s wish. Sahil has always stood by her in all times and situations. She tells Vaidika about their love story in the past life, then an accident which took their life. It’s now their second chance to complete this love story.

She urges Vaidika to go and protect her marriage. People consider her crazy, they make fun of her, and throw stones over her; still she doesn’t die. She would only get a peaceful death when she and Sahil have united. She was her mother Vaidika, in her past life. Vaidika can’t leave Sahil so easily even in this life. She tells Vaidika that Avantika is responsible for all this planning, she got a fake will of her father in law, tried to kill Shashi and is now going to marry Sahil. Vaidika can protect her marriage and get her Sahil back. Vaidika grabs the divorce paper and runs from the temple.

Avantika feels curt that Sahil must be sitting in a corner, awaiting her elder sister. But no matter Sahil does, she can’t lose Sahil so easily. She thinks this time she must stay cautious with her sister, then thinks of some idea and makes a call.

Sahil was in his room and thinks he is unsure what his father wants. Vaidika claimed Shashi was about to accept Vaidika. He wonders how to stop the wedding.

Vaidika thinks she must prove she can’t do this to Shashi. Avantika fall to such an extent only for the greed of money. Sahil was with her, now she can’t let Sahil’s life ruined. She is enough with the sacrifice, but today she must fight for her husband, her love and the truth.

Rekha takes a wedding dress for Sahil. She says she had thought a lot for Sahil’s wedding, but that divorcee Vaidika broke all her dreams. She was hopeful that once Sahil marries Avantika, everyone will be fine. Avantika stood at the door. Rekha turns to give the dress to Sahil by herself. Avantika asks why she has tears in her eyes, everything will be fine.

She takes the dress from Rekha and says she will get Sahil ready for wedding and bring him downstairs. Rekha says she is sure this choice for Sahil’s wedding is perfect. Avantika says Vaidika’s game has finished, now she will live in the house as Rekha and Shashi wants. Rekha prays Avantika is able to make up Sahil’s mood.

There, Vaidika was running on the street.

Avantika comes to Sahil’s room. She says there has been strange happenings with them since beginning. Today they will marry for his parents. This is called fate, they had to be husband and wife. She always considered his family as her family; she promises to always respect his parents. She will be a perfect daughter in law and perfect wife. She tells him to get ready and come downstairs. Sahil now speaks he has lost his heart in hands of only one person, her elder sister Vaidika Sahil Kashab. He and Vaidika belong to each other, in this and all lives to come.

Avantika might never understand the connection between them. Avantika sits besides Sahil but he stands up. Avantika convince Sahil that Vaidika is an aged girl, he isn’t the perfect couple for her. His proposal had come for Avantika, not Vaidika. She can give him what Vaidika can never. Sahil says Avantika can give him nothing, she must break this hope that he would marry her one day.

Avantika boasts she knows how to attract men, and one day Sahil would surely fall in love with her. Sahil says it’s a misunderstanding, he is Sahil and is different from other men. He only belongs to Vaidika. What Avantika wants will never take place. Avantika says she is leaving his dress, if not her, then at least for his father he must come to the mandap.

Prem Pratab sat in the house, upset. His wife brings tea for him. Arju comes there asking about Vaidika. She notices the tension. Her Bhabhi says Vaidika left home. Prem Pratab says someone attacked Vaidika’s father in law, Vaidika is being blamed; Vaidika had to divorce Sahil and leave home. Shashi Bhoshan’s will papers also came forward. He said the property can only be named after the family only if Avantika marries Sahil.

Prem Pratab says they couldn’t control Avantika who left. They feel ashamed of Avantika, who wish to destroy her sister’s family. Arju was angry and says Avantika must have a hand in all this. Arju blames Prem Pratab and his wife for never being a strength to Vaidika. She would call Vaidika right now, no one sacrifices their house in today’s age. She tries Vaidika’s phone but it was off.

Sahil sat with God’s idol and prays to unite with Vaidika. He at once feels as if Vaidika was around.

Vaidika had reached outside Kashab’s house. She was determined to unveil Avantika’s truth. There, Sahil runs through the corridors. Tanush reaches behind Vaidika, and stuffs her nose with medicine to make her unconscious.

He thinks Avantika called him at the right time. Sahil had just reached where Vaidika had been a while ago. Sahil thinks he feels Vaidika is around, and feels disturbed; if Vaidika is in some trouble. He thinks he will protect Vaidika at any cost.

Sahil finds Vaidika’s earring at the doorway and thinks his doubts were right, Vaidika came here. Deepak watches Sahil leave home and was worried for the guests.

There at home, Pandit ji asks Rekha to bring the groom down. It’s the first wedding in which bride is waiting for the groom. Mina and Deepak tells Rekha that Sahil has left home, Deepak saw him go outside. Avantika hears this and decides to call and warn Tanuj.

Vaidika was on the backseat of Tanuj’s car. He smirks that he won’t spare Vaidika worth going to any other husband. Sahil reaches him and has a fight with Tanuj. Tanuj gets a chance and drives the car away. Sahil had read on the car a badge from Sultan rentals.

Tanuj gets a call from Avantika. Avantika claims Tanuj is useless, and was angry. Tanuj tells Avantika that he just saved Vaidika from Sahil. Not even the angels would know where Vaidika is.

Sahil goes to the office to trace the car through GPS. The shop owner was having a meal and says he can’t give information of any client to him.

There, Tanuj tells Avantika not to worry, Sahil will soon be tired and return to her. Avantika says now Sahil would never return to her until he has saved Vaidika, he is crazy after Vaidika.