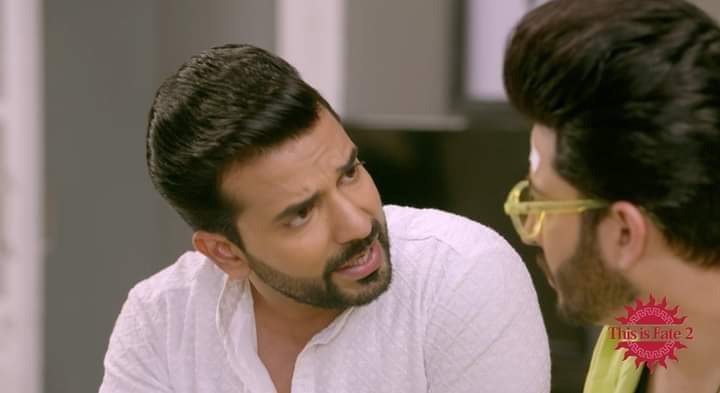 The ladies from neighborhood blame Sahil and came for gossiping. Bari Amma and Prachi shout at the ladies and tell them to leave. Nani comes outside and forbids Bari Amma curse her neighbors, Sahil ruined Aarya’s house. Bari Amma holds Vaidika responsible for all this.

Vaidika brought them into this cheap house. Nani says Aarya will now suffer for whole of her life now. Prachi answers the door bell, it was a gift from Aarya for Guddu. It was a brand new bike.

Vaidika and family reach hospital where Sahil was admit. Vaidika was concerned if police did this. Sahil says he did this by himself, he wanted to speak to her. He wanted to know if Guddu had an enmity, or is it a trap. Vaidika says she knows who did this. Everyone stares Vaidika. Vaidika replies its Ghungru.

Sahil at once realizes. Vaidika says Ghungru confessed this himself. She has no proof, but they will take help from police. Firstly, she wants Sahil out of jail. She can’t see him this way. Sahil was in some deep thought.

Neelam tells Ghungru she is extremely proud of him. Ghungru says Vaidika Agarwal would surely not sit silent. The next morning will bring a bad omen for her, he would snatch her husband from her. They turn to see Bari Amma pointing a gun towards them.

She asks if Ghungru wants to kill Sahil, he is her pride and she can’t see him hurt. She curses that Neelam spoilt the peace of her family, now she will treat them the way they deserve. Vaidika reach there and tries to stop Bari Amma from such a step.

Bari Amma says it’s because of this Ghungru that her Sahil has been accused of murder. Bari Amma pulls the trigger. Ghungru’s body fell into the lake down the cliff. Neelam screams for Ghungru, and tells Bari Amma she killed her own son in order to protect Sahil. He was Shankar and Bimla’s illegitimate son, her own blood.

He was taken away from the hospital. Bari Amma now mourns and regrets killing her own son. She wonders why she couldn’t recognize him and hug him though he was so close to her. Vaidika tries to console Bari Amma, but Bari Amma holds Vaidika responsible for all this. She wanted to know the secret of 333.

Neelam asserts it’s a result of her actions. She married a rich man and was recognized well, still she stole her husband, gave birth to his child, then kept him as a servant; she killed him when he demanded his own right. This should have happened to her. Bari Amma blames that she always held herself responsible that her son died because of her irresponsibility.

Neelam stole her son, then filled her mind with such hatred that he was against his family. Neelam was happy that her revenge was complete today.

Vaidika tells Neelam to at least feel bad for the son he brought up all her life. Neelam says the game was started by Bari Amma, but it was finished by her and Shirtij (Ghungru’s name).

Bari Amma holds a gun against Neelam. The police arrive to arrest Bari Amma for murder of Azaad Parinda, named Krish Asthav. Vaidika wonders how police reached here. Bari Amma was handcuffed while Vaidika and Neelam were taken for witness. Prithvi smirked and enjoyed watching all the scene.

The neighbors threw rotten egg and tomatoes into Vaidika’s house. Nani comes outside with joint hands. The neighbors didn’t want Sahil Agarwal and Bimla Agarwal into their neighborhood, they are murderer. Vaidika comes with Sahil.

Deepak tells Shruti that it seems Sahil is out, Vaidika must have worked hard to get him out. Vaidika speaks to the neighbors that they must stand with them at the difficult time. Sahil has been released, and they will find out who killed Guddu.

She lost her young son in law, her Aarya is a widow. The neighbors claim Vaidika has been blinded in Sahil’s love. They themselves have seen Sahil kill Guddu. They were aggressive and tell them to leave their neighborhood. Sahil now claps and appreciates their educated masses.

He says until there is a proof, a person isn’t a criminal. He makes it easier for them and punishes himself. Sahil says if anyone finds a proof against him, he will himself leave this neighborhood, this city, this society and the world.

He requests everyone to leave if they can’t support their neighbor in bad times. The neighbors leave. Sahil takes Vaidika inside.

At home, Sahil felt uncomfortable. He cries and wonders how this can happen. He hugs Vaidika and says Bari Amma’s son is like his brother; and he killed Aarya’s Guddu. Aarya might be here anytime. How they will face her.

Sahil says Vaidika behaves strong, but she is breaking down internally. Vaidika says what she has learnt from life is to move ahead, they will teach Aarya to move on in life. She gets a call from the one who went to pick up Aarya.

Vaidika and Sahil reach the cremation venue. Aarya already stood there in white clothes. She stares towards her parents out of hatred. She cries remembering her moments with Guddu, as she performs the last rituals as his wife. Sahil tries to hug Aarya but she pushes him back. Sahil was taken aback.

After the asthiya, Sahil tells Aarya that whatever she heart is false. They can speak at home. Aarya shouts that she knows everything and slaps Sahil instead. Vaidika was left in shock. Aarya says she can’t go anywhere with her husband’s murderer. She even forbids Vaidika interfere, and says Sahil Agarwal killed her Guddu.

She wish she had never considered Sahil as her father. She plays an audio Guddu had sent Aarya before his death. She says Sahil Agarwal had warned to kill Guddu, he always hated Guddu and Guddu was terrified. She questions who Sahil to interfere in their relation was. They broke all their rules to marry themselves, but ruined her marriage.

Vaidika controls Aarya and holds her back. Vaidika says Sahil didn’t kill Guddu. They are her parents. Aarya asks which mother takes side of her son in law’s murderer. She joins her hands and wants Sahil to leave her life. She clarifies to Vaidika that whether she would remain in her life, or her husband.

She must select any one of us today. She says Sahil is a murderer, he killed her Guddu; how shouldn’t she blame him. Sahil lost his balance out of shock. Vaidika goes to support him. Aarya says she has now seen Vaidika doesn’t value her at all.

Vaidika says she is getting everything wrong. She understands her pain and her anger both. She has gone through all this, when Anurag left them. She was waiting for her return and couldn’t tell everything on phone, and didn’t get a chance to tell her the truth.

She says she knows who did this. It was Ghungru, whose other name is Shirtij. He is Bari Amma’s illegitimate son who wanted to revenge them of his father’s death. He got into the house, was a magician and made all this happen. Sahil didn’t do anything.

Aarya says Vaidika has broken the whole record of melodrama. She isn’t idiot and won’t believe in her story. She wasn’t ready to believe anything. She says may be Vaidika feels insecure in this age, she got a guy of half her age and is crazy in Sahil’s love.

She can’t see the murderer of her daughter’s husband. Vaidika holds her hand to hit Aarya. Sahil stops Vaidika saying Aarya is in pain. Vaidika turns away and cries, then requests Aarya to go home. They can speak there. Aarya wasn’t ready to trust her.

She vows in the fire of cremation, Vaidika and Sahil are nothing for her. She considers herself an orphan and breaks her relation from them forever. She tells Pandit ji that today, along with her husband it will be her mother’s Sharaad as well.

She bathes herself in the pot of water. She vows that till she destroys the life of her husband’s love, she won’t do the Astiya Visarjan. This is her promise to her deceased husband. Vaidika cries hysterically and impatiently, Aarya walks away. Sahil promises Vaidika to bring Aarya back.

Sahil says Avantika is responsible. Vaidika says Tanuj kidnapped her from outside the house. He took her into a dark godown and tried to burn her face. Sahil reached to save her. Later he and his goons separated them again. Tanuj blackmailed Sahil that if Sahil doesn’t marry Avantika, he would kill her.

She tells the family that it was Avantika who was behind Tanuj. She is a sister who would always be on the right side, no matter it’s about her sister. Avantika says Vaidika first wanted a divorce and ready to take alimony, how did she fall in love all over again with Sahil.

Rekha also demands Vaidika the reason. Vaidika says she has brought the proof along with her. She calls someone inside. It was Shashi’s assistant. He apologizes, he had changed the will of Shashi on Avantika’s say. She came to his office with her boyfriend and he came into the greed of money. Later, Vaidika made him realize that his act would destroy whole of Kashab family.

He decided to be true to his work, and the family he had served for years. Manjolika brings Sameer home. Sorab accepts he did all this because of Avantika, he loves her and Avantika promised to come to him and marry him once they get the money.

He confess that Avantika hit Shashi, before Shashi could declare Avantika as his daughter in law. Avantika claims everyone is a liar. But Rekha slaps Avantika, blaming her for her husband’s injury and destruction of her family. Avantika pushes Rekha out of anger, but Vaidika supports her.

Sahil says he couldn’t believe Avantika would fall to such an extent. Prem Pratab was apologetic to them. Sahil says if their child commits a mistake, it’s not about their brought up. They are the ones who gave all these values to Vaidika as well. Sahil claims Vaidika is a super woman and a great wife.