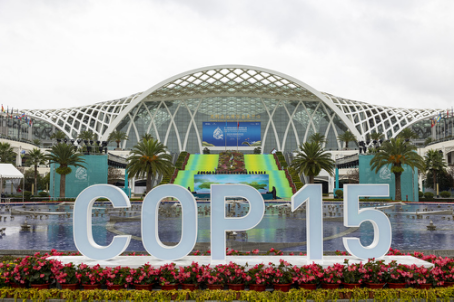 The 15th Meeting of the Conference of the Parties to the Convention on Biological Diversity (COP15) is held in Kunming, southwest China's Yunnan province between Oct. 11 and 15. (Photo by Weng Qiyu/People's Daily Online)

By He Yin, People's Daily

“The international community must enhance cooperation, build consensus and pool strength to build a community of all life on Earth,” Chinese President Xi Jinping said in a keynote speech.

He delivered the speech Tuesday at the Leaders’ Summit of the 15th Meeting of the Conference of the Parties to the Convention on Biological Diversity (COP15) held in Kunming, southwest China's Yunnan province.

Stressing the importance of following the philosophy of ecological civilization and proposing to make joint efforts to build a community of all life on Earth, the Chinese President has offered Chinese solutions and injected Chinese strength into the new journey of high-quality development for humanity.

All human beings live on Earth and shall protect the planet. Biodiversity makes Earth full of vigor and vitality, and lays the foundation for human survival and development. Protecting biodiversity helps protect Earth, our common homeland, and contributes to humanity’s sustainable development. 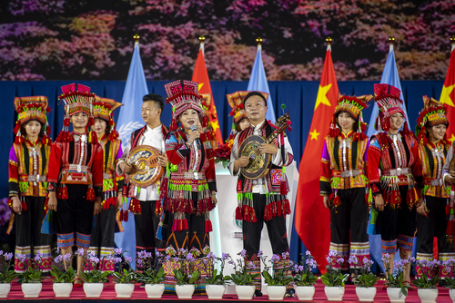 The 15th Meeting of the Conference of the Parties to the Convention on Biological Diversity (COP15) kicks off in Kunming, southwest China's Yunnan province on Oct. 11, 2021. Photo shows an ethnic performance at the opening ceremony of the conference. (Photo by Weng Qiyu/People's Daily Online)

At present, species extinction is taking place at an increasingly faster speed around the globe. Biodiversity loss and ecosystem degradation are posing a major threat against human survival and existence.

The Kunming conference, under the theme of “Ecological Civilization: Building a Shared Future for All Life on Earth,” has great significance. It will work for the conclusion of the Post-2020 Global Biodiversity Framework and identify targets and pathways for global biodiversity protection in the future.

Xi, shouldering the responsibility for human civilization and future generations, called on the world to build a homeland of harmonious coexistence between man and Nature, of coordinated advancement of economy and the environment, and of common development of all countries. He has made a grand blueprint for the building of a community of all life on Earth.

Participants to the conference generally believe that Xi's keynote speech fully demonstrated China's vision of building a community with a shared future for mankind, as well as the country's firm faith in contributing to global environment governance and biodiversity conservation. 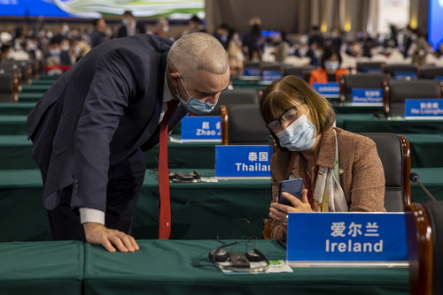 The Leaders’ Summit of the 15th Meeting of the Conference of the Parties to the Convention on Biological Diversity (COP15) is held in Kunming, southwest China's Yunnan province, both online and physically, on Oct. 12, 2021. Photo shows participants to the conference exchange views with each other in a break of the event. (Photo by Weng Qiyu/People's Daily Online)

China has made remarkable achievements in biodiversity conservation by vigorously advancing the top-level design and institutional construction for ecological civilization, and incorporating ecological advancement and conservation into its Constitution and its overall plan for building socialism with Chinese characteristics.

China is seizing the enormous opportunity in green transition to constantly promote the restructuring of industries and the energy sector. Chinese proposals and actions have offered valuable experiences for the coordinated development of economy and environmental protection.

The COVID-19 pandemic has cast a shadow over global development and compounded challenges to the UN’s 2030 Agenda for Sustainable Development. Faced with the dual tasks of economic recovery and environmental protection, developing countries need help and support all the more.

Xi stressed the world shall take international law as the basis to uphold a fair and equitable international governance system. The world needs to practice true multilateralism, and effectively honor and implement international rules, which are not to be exploited or discarded at one’s own will. The new environmental protection targets need to be ambitious on the one hand and pragmatic and balanced on the other, so as to make the global environmental governance system fairer and more equitable, he remarked. At the conference, the Chinese President announced China’s initiative to establish a Kunming Biodiversity Fund and take the lead by investing 1.5 billion yuan ($232.6 million) to support biodiversity protection in developing countries.

As one of the first countries to sign and ratify the Convention on Biological Diversity, as well as the host country of the COP15, China will work with other countries to make a balanced, powerful and executable action framework, take global biodiversity governance onto a new level, so as to realize the vision of harmonious coexistence between man and Nature, and build a community of all life on Earth.