By dabsmanuel (self media writer) | 25 days ago

Sitting Less than an hour away from the capital city of Senegal is an unusual lake that will surely catch the unsuspecting visitor’s eye because of its unusual yet visible pink colour.

Lake Retba also known as Lac Rose by locals, is nestled between white sand dunes and the Atlantic Ocean. As expected, its salt content is very high. Its salinity content compares to that of the Dead Sea and during the dry season it exceeds it.

The lake, also known as the Pink Lake, is situated near the village of Sangalkam in the Rufisque Department of Senegal, 35 km north of Dakar. It is divided into four different sections: Khar Yaala, Khoss, Virage and Daradji.

The lake has a 3 square kilometers stretch (about 1,1 square miles). Surprisingly, there are no major towns that can be found along its shores.

The lake was at one time the finishing point of the off-road car race, the Dakar Rally. Now, it has become a source of livelihood for the people of Senegal and West Africa who come there to harvest salt. 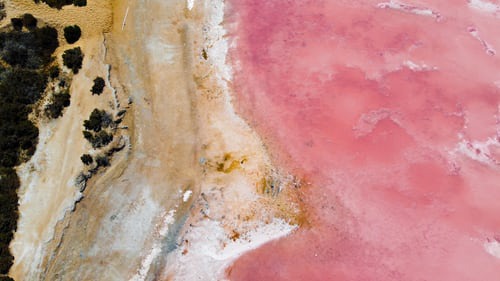 The red coloured pigmentation is due to a salt-loving micro-algae called  Dunaliella salina bacteria, which is attracted by the salt content of the lake. This red pigment is produced by the  bacteria in order to absorb sunlight, thus giving the lake its special colour. The red colour is visible during the dry season, lasting from November to June, and less during the rainy season between July-October.

There are not many living organisms that are able to survive in Lac Rose because of its high salt content. Because of this, it serves mainly as a tourist attraction point and for producing salt. According to a report by CNN "Men were hitherto fishing in the lake but by the 1970s, locals started to collect and sell salt for income following a period of economic hardships and drought ". 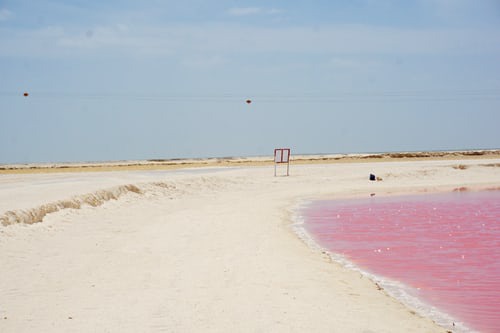 If you visit the lake, you will always see salt collectors at the lake working, you will also see that the shores of Lake Retba are full of piles of collected salt. The locals extract salt from the bottom of the lake using their hands, then they place them in baskets and transport them to the shore where it is used mainly to preserve fish, with over 70% of it being exported to other West African countries, particularly to the Ivory Coast. The locals who extract salt from the lake also use shea butter obtained from the shea nut tree. They cover themselves in shea butter. They do this to protect their skin from the water before swimming out and breaking the salt crust on the lake bed with long sticks as the water is highly corrosive . 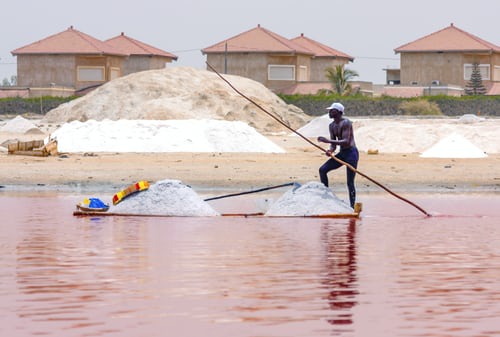 When and if you decide to visit the lake, you will be amazed, not only by the variations of the mountains of salt that have been packed up next to the lake’s shore, but also by the pink color of the lake’s water and the gold sand dunes that are on the other side of the Lac Rose.

Lake Retba is not the only pink lake in the world. There is Lake Hillier found in Australia. There are other lakes near Baku, Azerbaijan or in Jeddah and also in Saudi Arabia, but they are small and not natural.

Content created and supplied by: dabsmanuel (via Opera News )