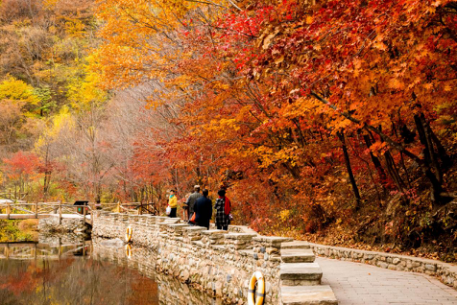 Du, a tourist from Benxi's neighboring city Shenyang, came to the tourist attraction with her family. She was so attracted to the beautiful scenery that she could not stop snapping after entering the scenic area.

Maple leaves are a character of Benxi's tourism, while the city's development highlights greenness.

Benxi was historically extremely polluted as part of China's old industrial base in the northeast. Huge environmental improvements have occurred as a result of the city's tireless efforts.

In recent years, Benxi has prioritized environmental conservation, steadfastly developed its industry, and vigorously pushed forward the cultural and tourism sector. The city sees huge gains in both ecological conservation and tourism development as it strikes a balance between environment and tourism.

"We probably have the most beautiful maple leaves in the entire Liaoning province," said Zhang Chunyou, an employee of the Fenglin Valley, and pride was shown on his face when he said it. No one would imagine that the scenic area was once an remote tree farm, he added. 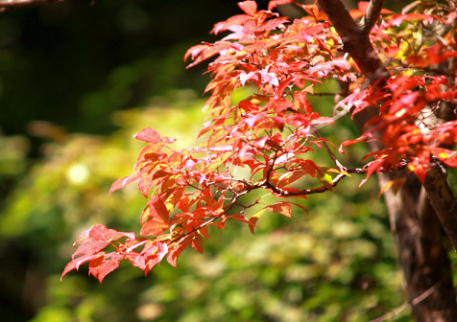 Zhang started working at the tree farm in 1980. At that time, the farm was ringing with the sound of motor saws all day. According to him, over 5,000 cubic meters of trees were felled annually, and almost all the trees there were chopped down eventually.

This resource crisis unquestionably sounded an alarm for the tree farm. Therefore, the farm, upon discussion, decided to establish a tourism company. After three years of planning and a massive "refill" of trees, the scenic area was opened to the public in June 2013. The June-December revenue that year equaled to the whole-year income from lumbering, and now the Fenglin Valley currently earns over 20 million yuan ($3.1 million) every year.

The story of the Fenglin Valley is a miniature of Benxi's green development. As a forest city at the national level, Benxi has forest coverage of 76.31 percent. In recent years, it has rolled out a series of regulations to safeguard the ecology, develop green coal mines and conserve its maple trees.Besides, it has also been working to fight air pollution. As a result, the ecological environment in the city is significantly improved.

Wang Guangchao is a resident of Heping village, Xiangyang township, Huanren Manchu autonomous county, located near the Fenglin Valley and Hugu Valley, another scenic spot in the county. He told People's Daily that the scenic areas have not only offered jobs for his fellow villagers, but also boosted the local B&B business.

Wang, who runs a small resort, gets new bookings practically every day. "I have to dish up for a huge group of tourists today, and some 30 of them are going to stay here tonight," he said.

In Tongjiangyu, a village near the Benxi Water Cave in Xiaoshi township, Benxi Man autonomous county of Benxi, the agritainment business is blossoming. The village has made the Man culture its prominent attraction and built a featured resort.

"The villagers used to subsist on their crops, and sometimes they took part-time jobs. Their annual income was only several thousand yuan," said Bai Jinghua, Party chief of the village. Now the development of rural tourism provides massive jobs for surrounding villagers, with some of them earning 3,500 yuan a month, he added.

Gao Zhifa, chief of the Communist Party of China (CPC) Xiaoshi township committee, told People's Daily that the local government, by calling on the operators of agritainment facilities to establish integrity alliances, has well regulated the market and improved their services. Meanwhile, the local government has invested over six million yuan renovating 45 stores, including 22 agritainment facilities in Tongjiangyu village, to make the village more attractive.

According to Wu Lan, secretary of the CPC Benxi municipal committee, Benxi will keep holding the vision of "lucid waters and lush mountains are invaluable assets," turn resources into great projects, and accelerate the fostering of leading tourism projects and brands to drive the high-quality development of the city's tourism industry.