Can A Woman Really Breastfeed A Snake With Witchcraft?

By OperaNewsSquad (self meida writer) | 1 months 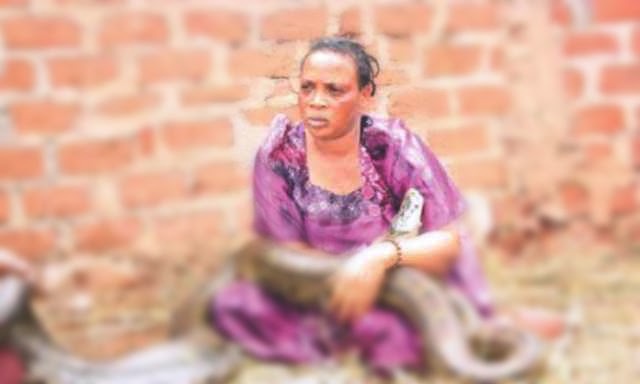 The last has not been heard about the mysterious black magic, commonly referred to as ‘Juju’ in Africa. A recent report surfaced from a village in Zimbabwe that a woman was found breastfeeding a snake while calling the names of the people she wants the snake to deal with in the village. Of course, It sounds absurd but the woman was arraigned before a court on a charge of witchcraft.

According to expressiveinfo.com, a 12-year-old eyewitness reported that she found Gogo Nenohwe breastfeeding a snake that had a red cloth tied around it. The little girl said Gogo Nenohwe kept on calling the names of people she wanted the snake to go and deal with in the village. Some villagers confirmed that they have seen a big snake tied with red cloth around the village but they have not been able to capture the snake.

The little girl further said that Gogo Nenohwe is her Aunt's friend and she immediately reported the case to her Aunt, but her Aunt did nothing about it. The court asked the Aunt why she kept quiet about the matter, she replied that she had no money to bring the case before the court. Gogo Nenohwe was quizzed to give her response on the allegations but she refused to utter any word on it. She even refused to speak to the press about it.

Despite the villagers corroborating the description of the snake, it still does not add up. Even if the snake was not venomous, the fangs would still hurt her. Could it be that the little girl saw her cradle the snake without wearing a top or bra?

One would definitely wonder how a woman would breastfeed a poisonous snake that has the likelihood of killing her. The only interpretation most people would give to this is 'Juju'. It means that the woman has some kind of witchcraft powers and the snake carries out her wish as a result of certain rituals which she has performed.

Do you think a woman can breastfeed a snake with witchcraft? Tell us what you think HERE

Tap Here to see other hot & trending posts on our Squad or you can simply click on either of the pictures below to browse through the groups.

If you don’t currently have access to Squad, simply update your Opera News app in the Playstore. You can also contact us via the following:

After Capturing Boko Haram Stonghold Today, Check Out What A Soldier Did To Honor The gods (Video)

Covid-19: Its impacts On Nigeria’s economy and ways of life

Why Owo's Traditions And The People Are Different, And What You Should Know About Them

15+ Funny pictures to make you laugh

Voices of fans heard, European Super league is back in the bin