By TwinkleUpdates (self media writer) | 4 months ago 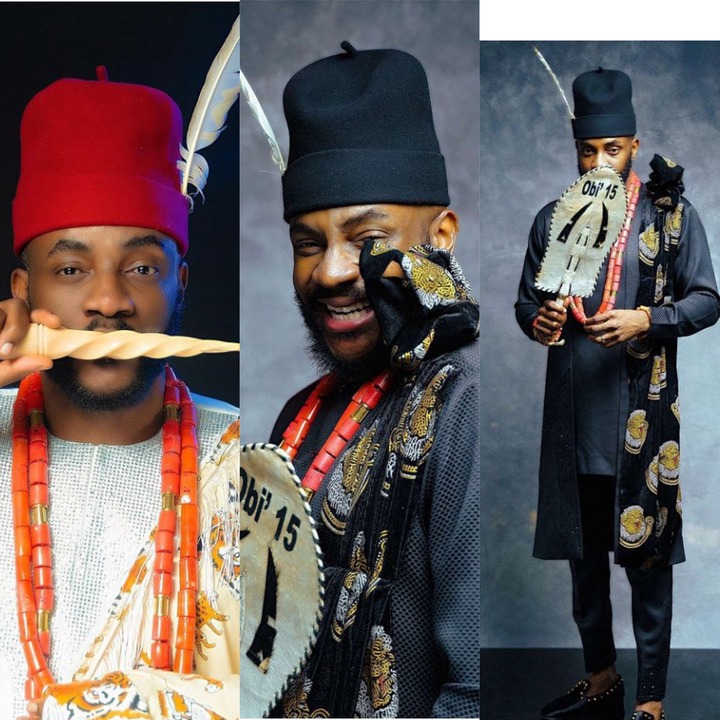 Chukwuebuka Obi-Uchendu popularly known as Ebuka, is a media personality and model. He is currently the host of the ongoing Big Brother Naija Reality Show Season Six (6). The reality show host, Ebuka has proven to have a good sense of fashion, as he always rock different types of outfit both corporate and sewn wears.

In today's fashion update, we will be looking at some perfectly sewn/trendy Native outfit collection of Ebuka, which will surely inspire fashion lovers who will come across this content. 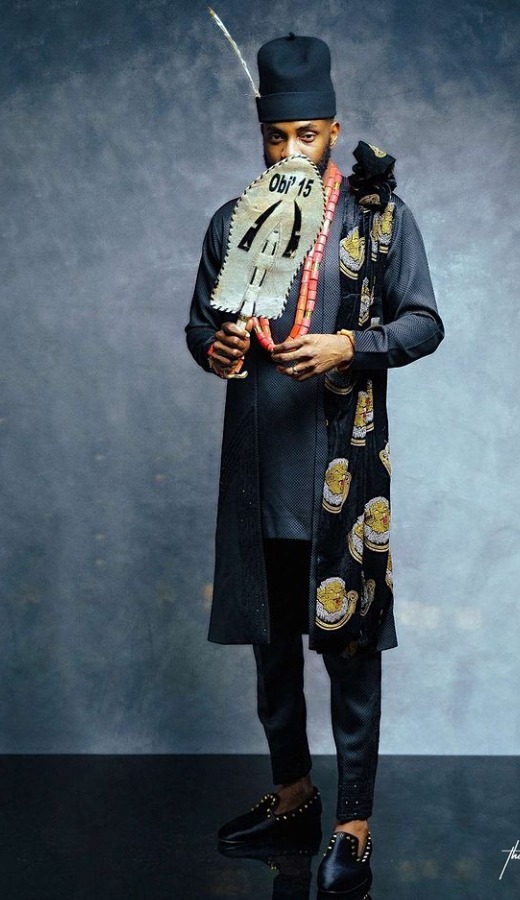 The above appearance, is a complete Igbo man's native appearance. He made a good dress up and represented Igbo tradition with his native wear above, which can serve as inspiration to every Igbo Man, who loves native wears.

Let's check out how the outfit above inspired us. His decided to come out in an all black appearance, as he wore a black traditional cap, which has an Eagle feathers attached to the right. Most Igbo men don't joke with their traditional cap as it purely signifies their culture.

He then wore an all black sewn wear, which had an Isiagu attachment on it, he also compliments the outfit with his black shoe, which offered him a captivating appearance as a classy native man.

To perfect his appearance as an Igbo man, he wore a long red bead on his neck and wrist. This perfect him to look great in the Igbo outfits. Then his hand fan, crowns his appearance well and worth copying by Igbo young men for every traditional gatherings. 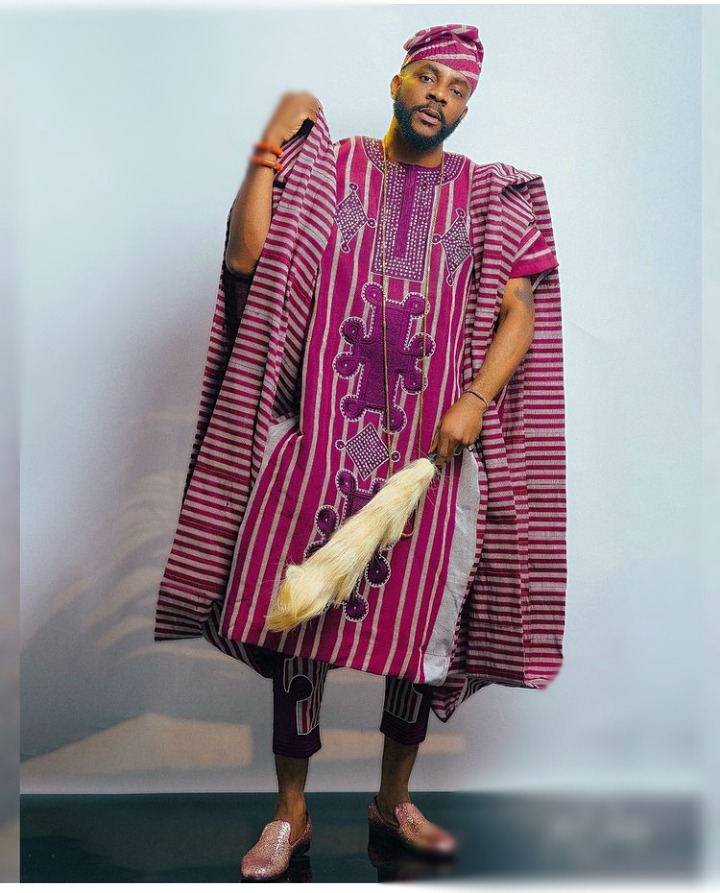 The above is another sweet and inspiring outfit, as the Big Brother Naija Host, Ebuka wore a pink sewn Agbada. This is another representation of the Yoruba Culture, as they are well known for wearing Agbada attires.

His cap and how he styled it towards the right hand side, gave him a perfect view of a Yoruba man. His outfit colour and design, perfect his cap and also his shoe perfects his appearance also, as the colours also matched his skin tone well. 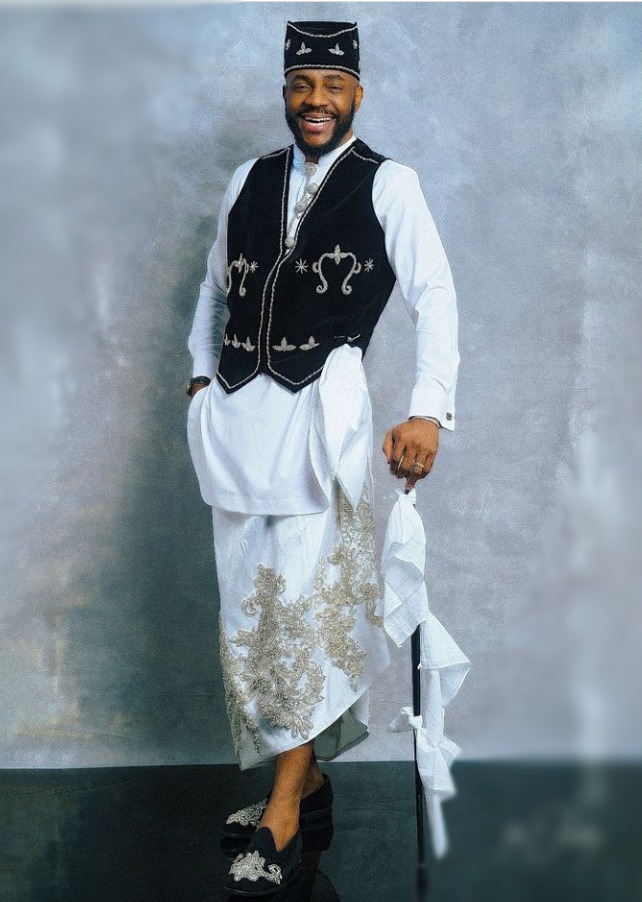 The above native wear, seems to be an Akwa Ibom wear. His black and white combination is worth copying for special events. His black colour jacket and cap, coupled with his shoe had a same design, which made him look stunning with the white colour gown and wrapper.

His appearance above is a typical native fashion, that should inspire both young and married men of that culture. 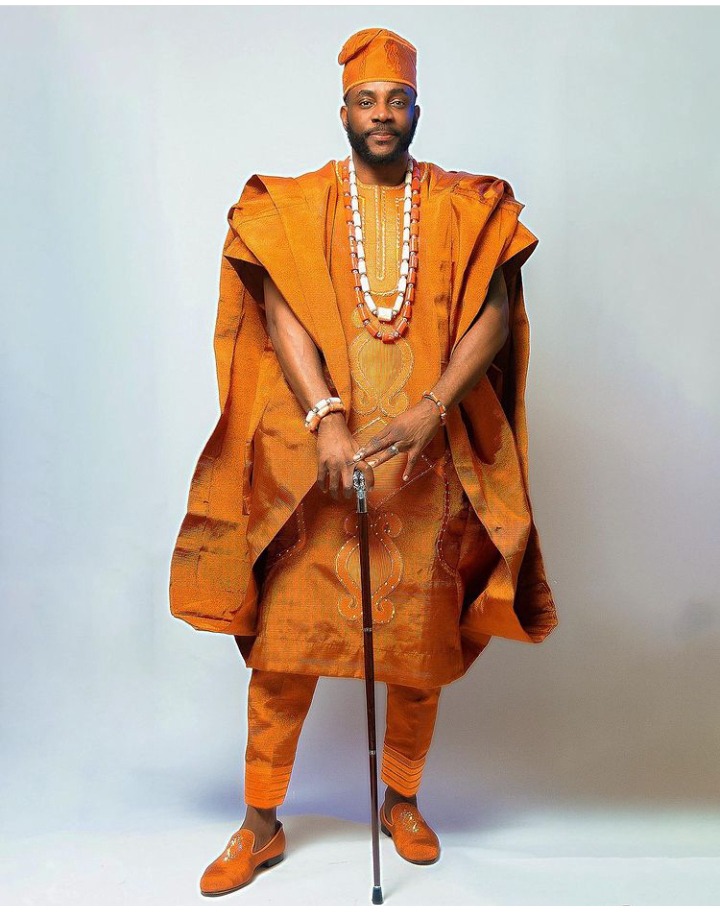 He also wore a two colour beads, which is red and white and the both colour matched well and made him look stunning to sights. 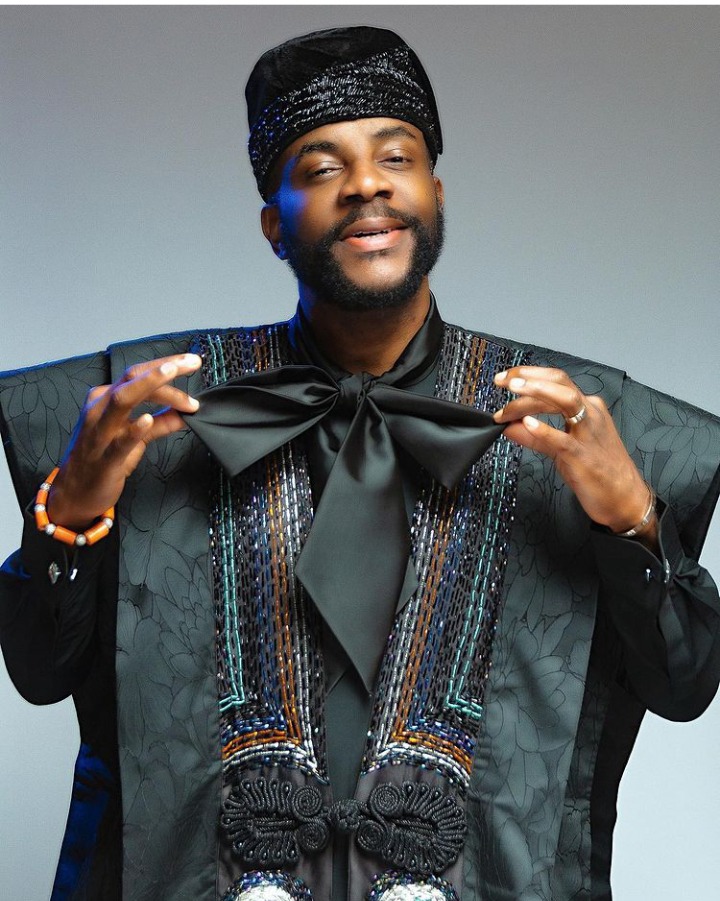 Let's talk little about the above appearance, as Ebuka made a creative appearance with his stylish neck tie that is inspiring and worth copying, by young men who want to stand out unique among mates. 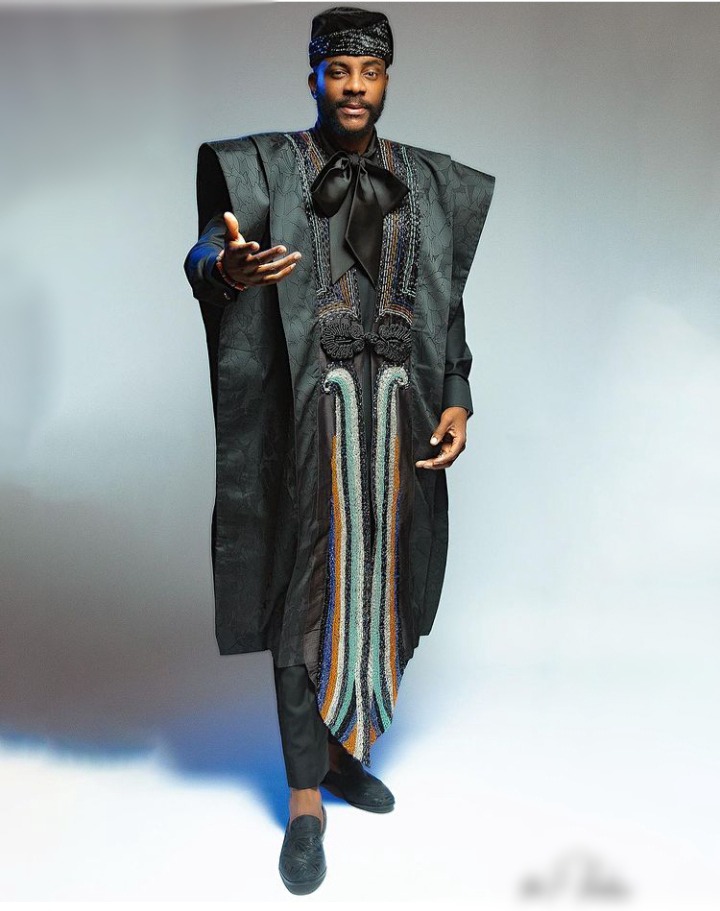 His black cap compliments his Agbada and also perfect his trouser and shoe. Then the simple/matured style offered to the outfit is topnotch and inspiring. 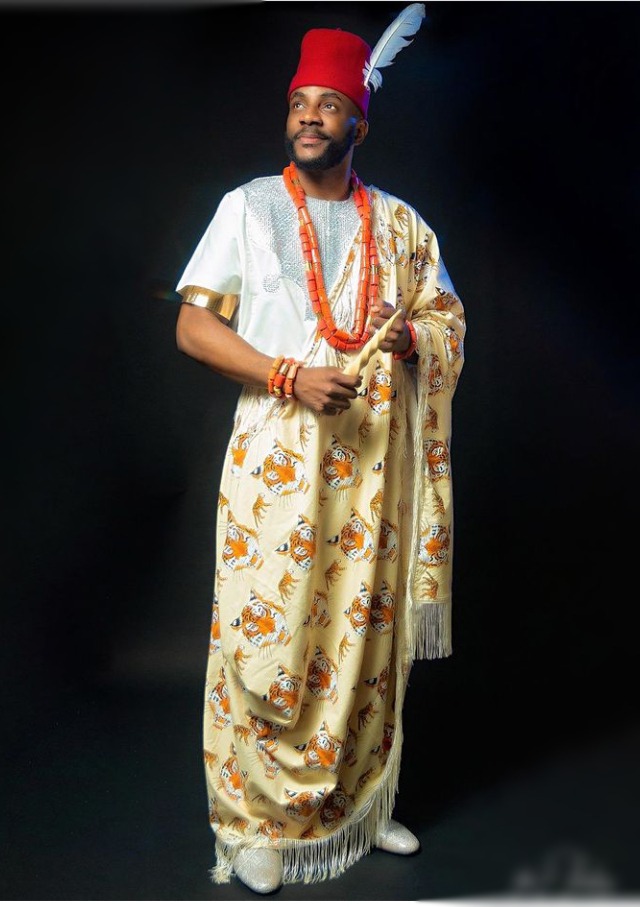 Above is another typical Igbo traditional outfit that will be inspiring to every Igbo man. His red can with an eagle feather, gave him the perfect Igbo man's view, coupled with his white shirt and long red beads. This is an inspiration to Igbo fashion lovers. 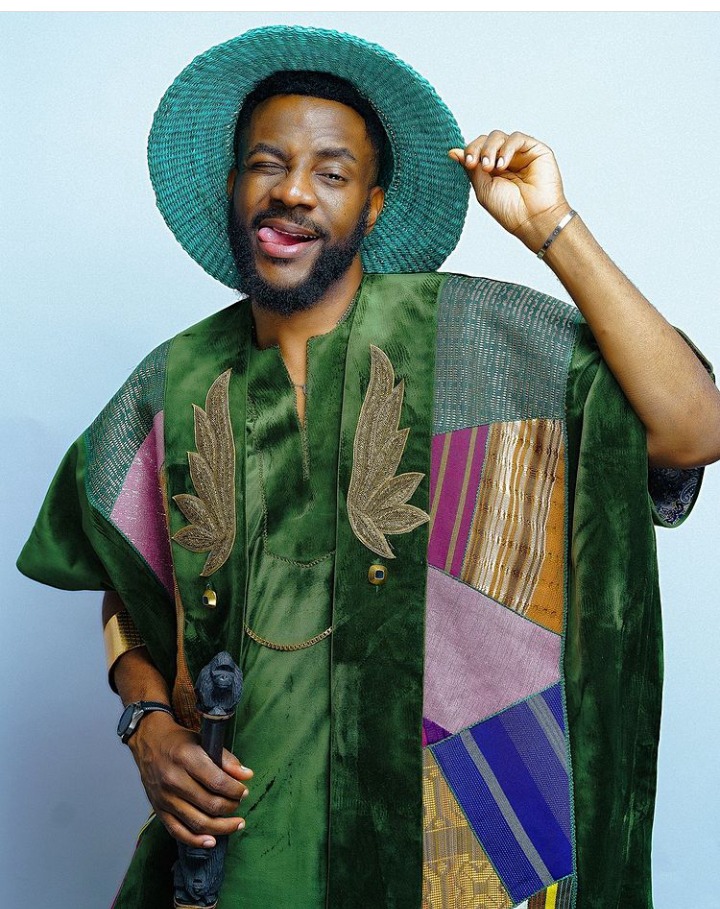 The above outfit got me speechless as I saw another level of creativity in fashion. The multicoloured attire gave a captivating appearance, which if tried by a fashion lover for outdoor events, the wearer will surely look outstanding among mates.

What do you think about his fashion sense/ creativity? Hope you got inspired?

Content created and supplied by: TwinkleUpdates (via Opera News )