10 Most Expensive Sneakers Ever Made

By Beamer (self media writer) | 1 year ago 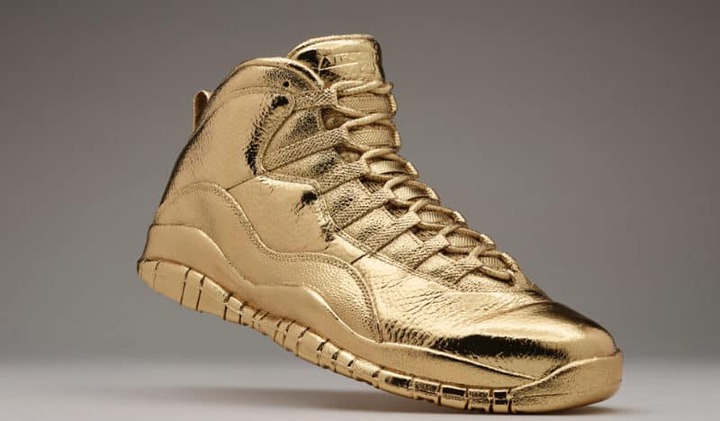 This list of sneakers and figures mentioned below have been compiled from various sources like Sneaker Freaker & Fashion Beans.

These are the 10 most expensive sneakers ever made: Like most artists, Eminem loves his sneakers. He's created a few nice limited edition collaborations before, so when he was invited to collaborate with Carhartt, things were about to get real.

They only made 10 pairs in total were one of the first shoes ever to be directly sold through eBay. Yet another Air Jordan on the list, the 2 OG is a coveted part of sneaker history, which is why it can command such a high price.

Not the most good looking of shoes it has to be said, but nonetheless, you can rock this shoe with a ton of different outfits and look fresh all day long. The sneakers have the famed number ''2'' on the heel in white, which compliments the navy suede surround. If you have expensive taste, and like diamonds, then you're going to love Big Boy's Diamond Encrusted Air Force 1's.

Not the rarest of shoes in the world, nor worn by any major ballers, instead, these shoes are covered in champagne diamonds, which is why they cost $50,000. The Air Jordan 12 OVO has always beeb a popular shoe, however, the Drake edition blew the doors of its hinges, selling for $100,000 on eBay.

Popular with a lot of sports stars, rappers and major celebrities, the Drake edition OVO's are only really attainable to the rich and famous. Once mentioned as the most expensive Jordans in the world; the price really derives from fact that Micheal Jordan wore the sneakers in the infamous ''Flu Game'', - a game which he played while having the flu.

Loaded with 11.5 carats of diamonds and set in 18-karat gold , these shoes aren't for the faint-hearted.

If you're looking for a fresh pair of white kicks, and fancy something totally unique, then cough up $132,000 and they're yours! Arguably the most expensive game-worn sneakers ever, Micheal Jordans Converse Fastbreaks sold for $190,000.

In 1984, team USA won gold at the Olympics in Los Angeles. Decades later, a pair of Converse Fastbreaks signed by Micheal Jordan came up for auction.

Originally only expected to reach $100,000, the auction far surpassed every sneaker-heads imagination! It's a bit of a steep jump from second to first position, but if you're thinking of spending $100,000 on a pair of sneakers anyway, then you may as well go one better.

There had to be a day when a pair of sneakers were coated in 24k gold, and that day finally came when Drake collaborate with Nike to make the Solid Gold OVO x Air Jordan.

They were created by America artist Matthew Senna and each shoe weighs 50Ibs.

$2 million seems like a good deal with all things considered.

Content created and supplied by: Beamer (via Opera News )