Melanin and its benefits

By SkincareHub (self media writer) | 2 years ago 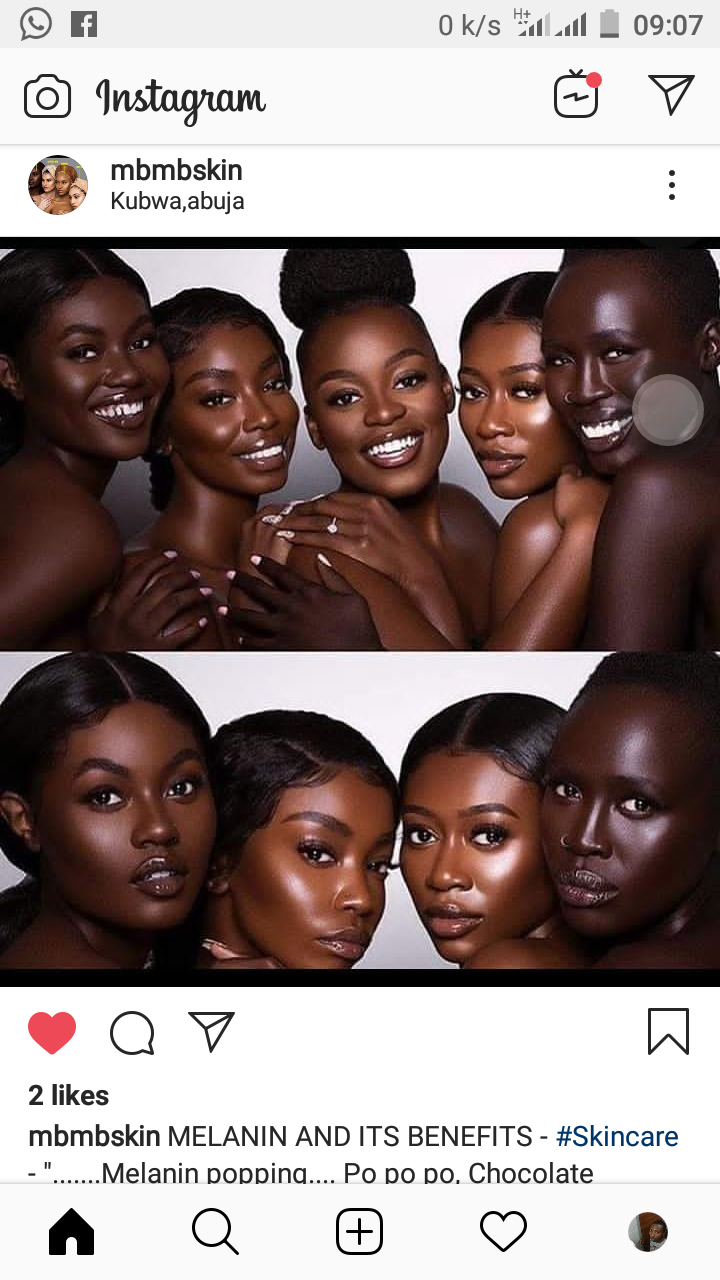 I think that line is from a song by Korede Bello or so, lol!

So melanin... What is it all about?

I will try to use as much simple language and break things down as simple as possible, so this post might be a bit long.

If you are a lazy reader with all the problems in the whole world on your shoulders, now is the time to stop and move on.

Melanin is simply colour that is released every day by cells within the skin called melanocytes..

These colour is what determines essentially how we look and it colours not only our skin but eyes and hair.

Now the amount of colour released is determined by our genetic makeup.. This means that if your parents are both deep black, their natural melanin is on the high and you will most likely inherit same and be very black.

My dad is dark brown and my mom is fair, so they both contributed colour to me and the colour mixed and I came out fair at first then now I'm light brown to chocolate!

So I hope you get the drift!

Melanin is there as a protector!

You see this sun outside, from ten am, it's no longer your friend but an enemy ready to age you and you can't do anything about it.

So daily when you step out of your house and sunlight (or not, if just UVA rays in general) lands on your skin, your body immediately begins to produce melanin.

When you're constantly in the sun or even for two seconds, your skin releases colour to protect the skin because that harsh sun rays causes health problems like skin cancer for example.

Skin cancer is not common amongst blacks because we have melanin which protects us.

As black people, we have over sufficient amounts of melanin that makes us darken, like automatically when we step into the sun.

Now white people don't usually have this, so rather for them to darken, which they call tan, they burn, some, depending on their genetic makeup, might tan a bit, most won't tan at all and only burn and long term exposure leads to melanoma which is a form of skin cancer while albinos also have no melanin at all, so they are also prone to skin cancers but because you probably don't have them as relatives or friends, you have no idea how much they struggle to be alive while you take for granted what God has given you so freely!

Take a minute to be thankful now!

So the reason your lower arms, face and neck appear to be darker than other parts of your skin is because because of constant sun exposure, it causes damage and the skin sends melanin to that area.

It's not until you see blood on your skin before a skin is damaged.

Same way you hurt yourself and as it heals, it darkens, that's the same logic with the sun, it shows you that the sun is damaging and hurting your skin and as it heals, it appears darken while parts of your body covered appears lighter and women in purdah, that is those you call eleha, look beautiful and even tone because they are always covered from head to toe while races like whites who don't have enough melanin and also albinos have to struggle and they are constantly advised to use sunblock else skin cancer might be in their future.

Not to get scary, the sun damages and break down your skin cells and causes it to gradually loose collagen and kills your skin slowly such that your skin is constantly in a state of healing because daily and as it looses the battle as you age, you begin to get wrinkles, sun tan with areas of your exposed skin darker than the rest as it produces melanin then when you bleach your skin, it's like trying to insult a skin that is trying to protect you by giving you colour and you take it off and without sunblock, you keep going in a cycle of skin damaging routine that after a while, your skin literally collapses.

Now some might say but I only come out for like two minutes a day every day and go back inside, lol, the skin is an amazing machine and I told you it has a memory, even if it is one second a day you step out, it will record that moment, then pile it up for every two minutes you step out and still darken, so it takes the darkest black skin an hour to burn, so if it takes you a month to record an hour of sun exposure, that's when it will take to darken still.

That is why sunblock are very important.

It is there to shield your skin such that if you're bleaching or toning your skin, your skin can focus on that and not feel like it's been pulled back and forth by agents of lightening and agents of darkness literally lol and constantly in a state of repair and healing all through, so once it's protected, your skin can focus on lightening and glowing while not worrying about having to produce melanin daily because it's covered by "insurance ".

Now we have chemical and physical sunscreen.

So you see why I always go for physical sunblock, although amazing, it has its drawbacks, it can appear very white on your face, chalky almost and even pasty and oily, but there are great ones these days like the one I use which is almost perfect.

While chemical sunscreen applies perfectly but might cause some skin tanning from absorbing the rays and it has been said it causes hormonal imbalances in the long run due to the kinds of absorbing chemicals added to it and it can also be irritating to the skin but it applies perfectly without issues, so it's like they both have their struggles, so pick your struggles, I will rather pick physical sunblock struggle.

So I hope you understand now how the skin works and why it's important to use sunblock to help reduce the skin's struggle to help you and instead focus mainly on glowing and flourishing.

Content created and supplied by: SkincareHub (via Opera News )