By carternatex (self media writer) | 8 months ago 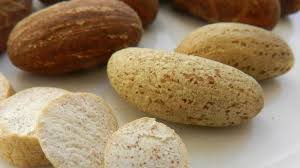 A lot of Nigerians do ignore the healing power and the health benefits of our natural herbs and fruit. Today we are going to talk on Bitter kola

Bitter kola, also known as bitter cola or Garcinia Kola, is a plant found in Central and Western Africa that has long been valued for its medicinal properties. Although traditional African medicine uses all parts of the Bitter Kola plant, the seeds are mostly commonly eaten.

Bitter kola seeds have a sharp, bitter flavor that eases into a slight sweetness as you chew, and they’re typically eaten raw. When they’re dried, the taste becomes milder and they reportedly smell of nutmeg.

The kola nut comes from the evergreen kola tree and contains micronutrients.

The kola nut contains about 2 to 3 percent caffeine and 1 to 2 percent theobromine, both of which act as stimulants when consumed.

Caffeine is the stimulant often found in coffee and cola soft drinks.

Theobromine is also found in green tea and chocolate.

In certain African countries, the kola nut is chewed during ceremonies and rituals. It is also used to sweeten breath. Another application of the kola nut in the western world is as a flavoring agent for sodas.

The kola nut is also used as an additive in energy drinks and performance enhancers. In some cases, it is used in the form of an extract or powder.

The nut is boiled to extract the kola or it can be ground into a powder. In certain parts of the world, the nut is used as a type of alternative medicine.

Bitter kola has so many uses but for the content of this article we are going to talk on the health benefits of bitter kola.

> Glaucoma is a condition of increased pressure within the eyeball, causing a gradual loss of sight, and can result in permanent blindness if left untreated. bitter kola is useful for reducing the pressure in the eye for newly diagnosed patients, and was as effective as more conventional treatments. It is important to note that you must follow professional medical advice and treatment if you have glaucoma, even if the condition is newly diagnosed.

> It helps to fight Infections

Bitter kola has been used over the years to fight infections from the common cold to hepatitis. A 2018 study showed that bitter kola can help combat coughs, bacterial infections, and viral infections. Eating bitter kola when an infection starts may help fight the infection and make you feel better more quickly.

Bitter kola seeds have commonly been chewed on in Africa to fight against inflammatory conditions like arthritis. One 2008 study showed that patients with osteoarthritis in their knees showed significantly reduced inflammation when eating bitter kola compared to a placebo. The high levels of potassium in bitter kola may be a contributing factor in reducing inflammation.

Early studies suggest that a chemical called kolaviron, which is found in bitter kola, may protect against hypoglycemia in people with type 2 diabetes. Although this first study was done on rats and has not yet been reproduced on humans, these early findings are promising.

Kola nut powder and extract may help digestion. They are thought to promote the production of gastric acid, which increases digestive enzyme effectiveness in the stomach

Although extensive studies have not been conducted, early research indicates that certain compounds found in the kola nut may decrease the risk of prostate cancer.

The research is still being debated, but it is thought that the phytoestrogens in kola nuts may kill cancer cells and stop tumors from growing.

The kola nut may be helpful for people who have migraine headaches. Migraines often affect the blood vessels in the head and caffeine has been used for headache pain.

The theobromine and caffeine contained in the kola nut may dilate or widen blood vessels in the brain, which might decrease migraine pain.

The caffeine and theobromine in the kola nut may speed up the heart rate, which increases circulation.

One study reported in the Journal of Biosciences and Medicines indicates that the use of kola nut extract might stop the growth of harmful bacteria.

There are several health conditions that might be improved by consumption of the kola nut.

People with a slow metabolism could benefit from using products that contain kola nut.

Although it may not be recommended as a treatment for respiratory conditions, kola nuts might be useful for people with certain breathing problems, such as asthma.

The caffeine in kola nuts may act as a bronchodilator, which means it opens the airways to make breathing easier.

Kola nuts and products containing kola nut may not suit everyone.

Anyone who is allergic to nuts should also avoid kola nuts. An allergic reaction to kola nuts may include symptoms, such as:

People with certain medical conditions might also be advised not to use products that contain kola nuts. For instance, kola nuts may not be good for people with high blood pressure or certain cardiac conditions due to their stimulant effect.

Anyone who has difficulty going to sleep or staying asleep may want to avoid the kola nut, as well. The high level of caffeine found in the nut and supplements with it in, may stimulate the central nervous system and make sleeping difficult, especially for people who are sensitive to caffeine

Content created and supplied by: carternatex (via Opera News )