"Spaghetti is better than noodles"- my chef says

By Youniques (self media writer) | 2 years ago My chef made a statement in which i argued against, this article is based on clarification and to shed more light on the matter(My opinion).

Spaghetti and noodles are good foods that we consume which are mostly taken in western and Southern Africa, but whether spaghetti are more preferable to noodles is an issue to look into.

We can admit the pleasurable taste that they both deliver when they are properly cooked and made according to one's personal preference.

However, let's take a look at some instances of both to delve better into the issue.

Spaghetti also known to be pasta is a staple ingredient of a Mediterranean style diet, which offers real nutritional value, some of which are sustainable energy due to carbohydrates resulting to glucose,folic acid,low sodium, cholesterol free and so on. Spaghetti can be cooked in different styles and methods due to its nature whether taken with sauce or fried stew garnished with proteins, some are garlicky spaghetti , lemon ricotta pasta,spaghetti with meatballs and so on.

Also , its sticky nature which most people don't like can be controlled by adding groundnut oil or olive oil. However, the downside of eating spaghetti is that it has high amounts of carb which is bad for health when taken in Large quantity. It also contains gluten , which is a type of protein that can cause problems for patients who are gluten sensitive. Noodles are staple foods largely consumed in many Asian countries and are internationally recognized.

It is made from wheat flour, water, salt and starch. They are convenient, nutritious and affordable.

Noodles can be cooked in different ways and garnished with vegetables and protein, it can either be cooked to be moist or in dry form. Time made to prepare noodles is not really exhausting, it can be prepared in time which is why it is called "instant noodles".

Meanwhile, the downside of taking excess is that they can cause obesity, metabolic ailments like diabetes, high blood pressure, hypertension and so on.

In my opinion, I think each of them has a part where they do well at, and also some part which some people find less appealing.

If most people consume spaghetti than noodles, that doesn't mean noodles are bad or less preferable, it depends largely on each criterion and choice. 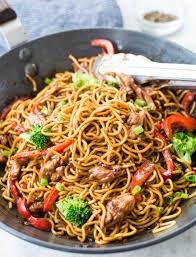 So, what is your view on this topic? Do you still have a different opinion or you want to contribute, you can let us know in the comment section below.

Don't forget to like and share this article to others too and follow-up for more interesting article.

Content created and supplied by: Youniques (via Opera News )