3 vegetables you should be eating and 3 you shouldn't.

There are few foods whose nutritional halo shines bright as that of the nutrient-dense, calorie-scarce vegetable.

Vegetables' unquestioned status as a health food has existed for years. For generations, mothers have denied their children dessert before they finished their vegetables. Health fanatics shove vegetables into blenders to choke down the "delicious" green-colored, earth-tasting sludge. Nutritionists insist we eat a minimum of three to five servings of vegetables per day.

After years of vegetable glorification, we were surprised to learn that not all veggies are as healthy as we thought. In fact, there are a number of vegetables you might be better off avoiding altogether.

Of course, keep in mind that even the least healthy vegetables are likely to be superior to, say, a deep-fried Twinkie or mouthful of Cheese Whiz. But when deliberating between veggies, it helps to know which ones can deliver the most powerful nutritional impact — and which ones could be putting you at risk for gastrointestinal problems, tummy aches, and worse.

If you're looking for a veggie that's as tasty as it is nutritious, radishes will certainly not disappoint. Besides being juicy and full of flavor (either sweet or pungent, depending on the variety of radish), this root vegetable is extremely versatile, used in everything from salads to stews. Short on time? Give your radishes a quick slice and enjoy them raw for a super simple snack. "I like the peppery bite and nearly bitter taste of fresh radishes," Matt Bolus, executive chef at The 404 Kitchen in Nashville, told me. "To balance those flavors I like to eat them with fresh ricotta cheese, honey, and olive oil."

They're high in fiber and low in calories and carbs, so go ahead and get your munch on.

Cucumbers are one of my favorite vegetables for a number of reasons. First off, you don't have to cook them (I'm all about saving time). Secondly, they are extremely refreshing (I love to toss a few slices in my water to switch things up). Finally, they make a good combination with just about anything — tuna, tomatoes, hummus, watermelon, you name it.

What's more, according to Huffington Post, cucumbers are actually considered one of the healthiest vegetables. They're chock full of nutrients, including potassium, vitamin K, and flavonoids, which are anti-inflammatory substances, that may help in reducing the risk of certain cancers and cardiovascular disease. Did we mention cucumbers are also ridiculously easy to digest? Sounds like an all-around win to me.

Carrots are one of those superstar vegetables that seem to be a hit with even the pickiest eaters. "Carrots are one of my favorite vegetables to grab for a quick snack. Dietician and nutritionist McKel Hill shared on her website. "Crunchy, slightly sweet, and juicy, carrots are great to use in savory and sweet dishes."

Carrots are super versatile and can be eaten raw or cooked in anything from a smoothie to a soup or even a cake. Carrots are also a great source of vitamin B, vitamin C, vitamin D, beta carotene, olic acid, potassium, magnesium, and fiber. Like cucumbers, they can help clean the intestines, making them a great veggie choice for anyone who experiences regular constipation.

It's hard to imagine eschewing the vegetable that gives us french fries, tater tots, and potatoes au gratin. In addition to being tasty and versatile, potatoes are cheap and widely available.

But, according to scientists at Harvard School of Health (who won't even call potatoes vegetables), they're high in carbohydrates — the kind your body digests quickly, which causes your blood sugar and insulin to sharply increase, then drop. Consuming one cup of spuds, then, has about the same effect on your blood sugar as a can of soda or a serving of jelly beans.

Those same Harvard scientists also linked potatoes to weight gain and diabetes, pointing to studies where people who ate more fries or baked or mashed potatoes put on pounds, while those who decreased their intake of these potato dishes trimmed down. They also noted that a similar study found frequent potato consumption resulted in higher diabetes risk among women.

In order to keep your blood sugar and weight from spiking, opt for potato alternatives, such as whole grains like brown rice and quinoa. 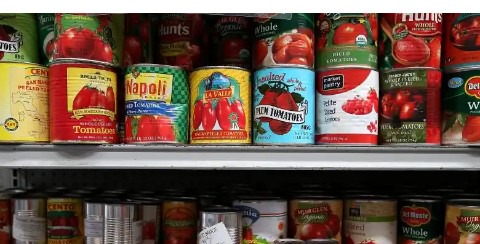 "Now hold on," you cry. "Tomatoes are a fruit." Well botanically speaking, you're right. But nutritionally speaking, the term "fruit" is used to indicated sweet produce often used in desserts, while the term "vegetables" is applied to low-fructose plants. So botanical fruits like tomatoes, eggplants, and pumpkins are classified as vegetables by nutritionists — and the good-looking writers at Mashed.

Moving on. Fresh tomatoes contain a ton of nutrients, including cancer-fighting antioxidants. But if most of the tomatoes you're eating come from a can, they might actually be doing the exact opposite. That's because some cans are made with a chemical called bisphenol-A (also known as BPA). This chemical, combined with the high acidity found in tomatoes, can actually be quite dangerous.

When it comes to tomatoes, fresh is definitely best and cooked may be even better, according to Uitert. "While tomatoes can be consumed raw, when cooked, it increases the amount of lycopene, an important phytonutrient that studies have shown to lower the risk of cancer and heart attacks," she explains. "When cooked, it becomes more bioavailable, allowing you to digest and absorb more of the powerful antioxidants."

When it comes to quintessential American foods, corn is right behind apple pie and hamburgers. And the bright, yellow vegetable is not without its health benefits: corn contains phytochemicals like lutein and zeaxanthin, which can help promote vision health. It's also full of nutrients like iron, potassium, and vitamin B.

But there are a number of reasons why you may want to limit your corn intake, particularly if weight loss is your goal. A Harvard study discovered that subjects who ate more corn tended to pack on pounds. The amount of weight gained from corn even exceeded the pounds put on from other starchy vegetables like potatoes and peas.

The reason corn consumption could spur weight gain has to do with its high glycemic index, which causes blood sugar to skyrocket. The spike in blood sugar can lead to cravings for unhealthy food — not unlike the spike that follows eating potatoes or a slice of white bread.

To top it all off, corn includes phytate, a phytonutrient that can prevent the absorption of zinc, iron, and selenium.