Common Herbs And Vegetables And Their Names In Local Nigerian Languages

By BestieWrites (self media writer) | 29 days ago 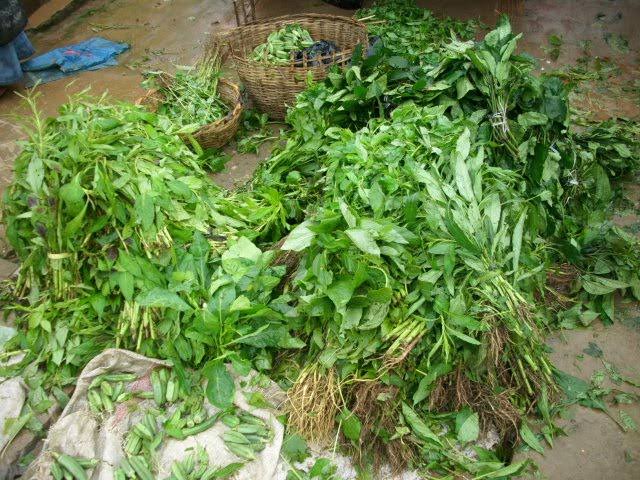 Nigeria is blessed with an abundance of various natural resources, including vegetables and herbs, many of which have a wide range of benefits in terms of health and wellness.

Even though some of us can easily recognize the majority of these vegetables and herbs existing today, very few actually know the common names as well as the local names of these plants.

1) Bitter Leaf: As the name implies, bitter leaf is a bitter plant whose extracts, barks, and stems are used for culinary, and medical purposes. It is known as Ewuro in Yoruba, Onugbu in Igbo, Etido in Efik, and Shiwaka in Hausa.

2) Basil or Scent Leaf: The scent leaf is an aromatic herb that has great components that help prevent and treat infections and diseases. It is known as Efirin in Yoruba, Daidoya in Hausa, Nchanwu in Igbo, Mfang in Efik. 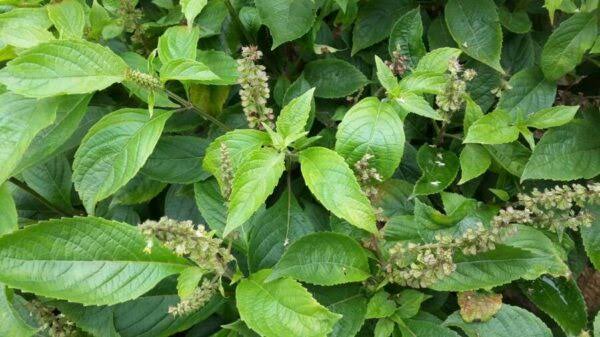 3) Water Leaf: Waterleaf is an annual herbaceous plant of West Africa seen in most of the states in Nigeria, mainly in the south. It is known as Gbure in Yoruba, Nte-oka in Igbo, Alenyruwa in Hausa, Ebe-dondon in Edo, and Momoi-kong in Efik/Ibibio.

4) African Spinach: The African spinach is a very traditional vegetable eaten in Africa, and reportedly the most popular green in the country of Nigeria. It is known as Efo Tete in Yoruba, and Inine in Igbo. 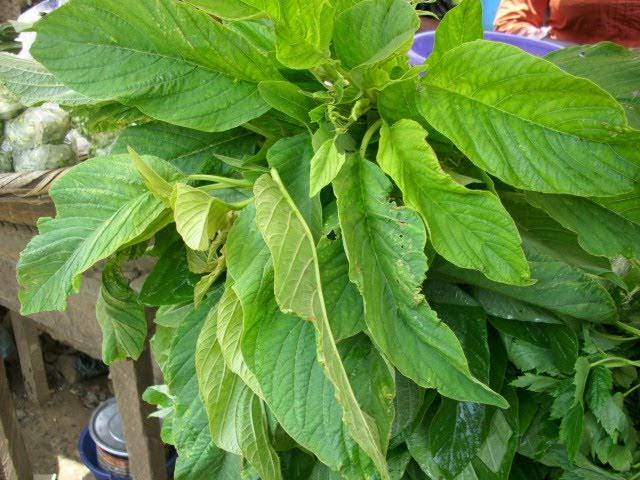 5) Lagos Spinach: Lagos Spinach is an all green and colourful vegetable, eaten in soups, stews, and side dishes in parts of Nigeria. It is known as Sokoyokoto in Yoruba.

6) English or Malabar Spinach: The Spinach is a green, leafy vegetable that is high in nutrients and very good for the body. It is known as Amunututu in Yoruba, and Gborongi in Igbo. 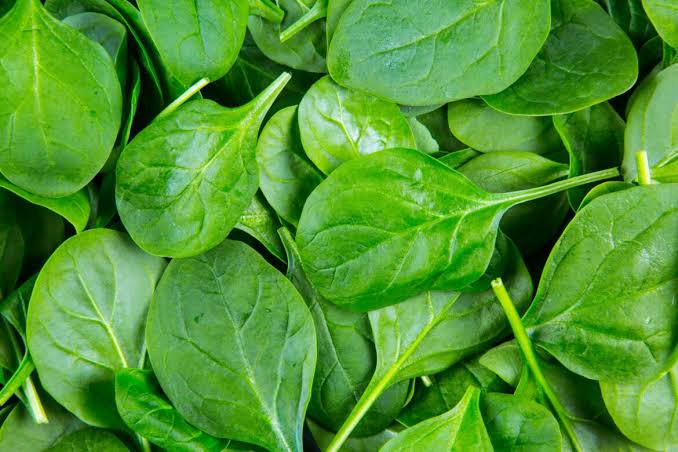 7) Fluted Pumpkin Leaf: Fluted pumpkin is one of the most consumed dark green, leafy vegetables which are of many benefits to the body. It is known as Eweroko in Yoruba, Ugwu in Igbo, and Kabewa in Hausa.

8) Bushbuck: The bushbuck is a climbing shrub with broad, heart-shaped leaves that has a characteristic sharp, bitter and slightly sweet taste, especially when eaten fresh. It is known as Arokeke in Yoruba, and Utazi in Igbo. 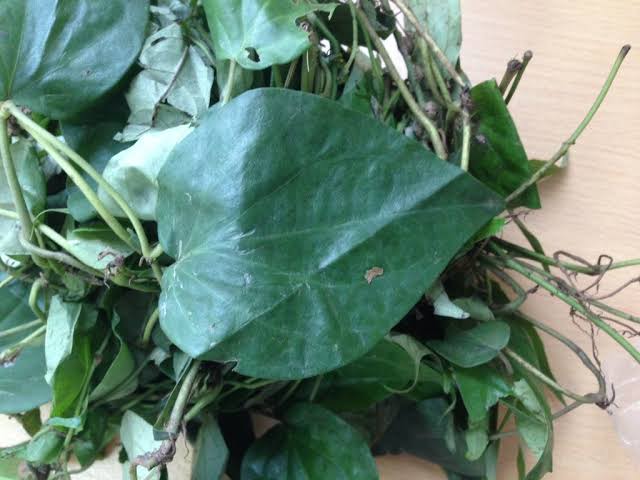 9) Girdle Pod: Girdlepod is an annual plant from West Africa and has long been used for traditional medicine. It is known as Irawo-Ile in Yoruba, Gudugal in Hausa and Obuobwa/Ogwungwo in Igbo. 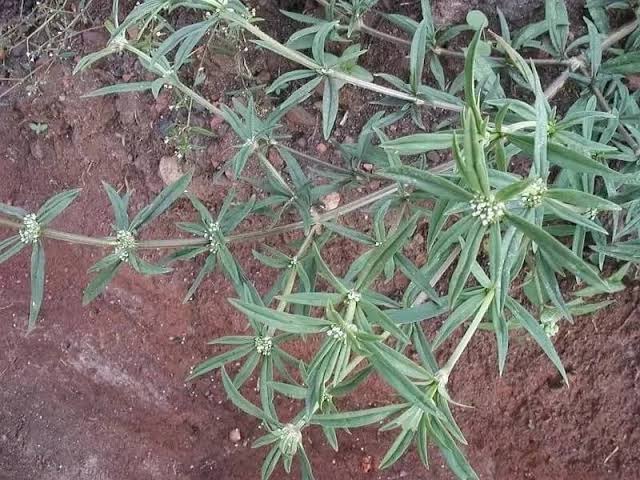 10) Wild Lettuce: Wild lettuce is a cousin to cultivated lettuce, but it grows as a weed. It's sometimes called a bitter herb because of its sharp flavour. It is known as Efo Yarin in Yoruba, Ugu in Igbo and Nonanbarya in Hausa. 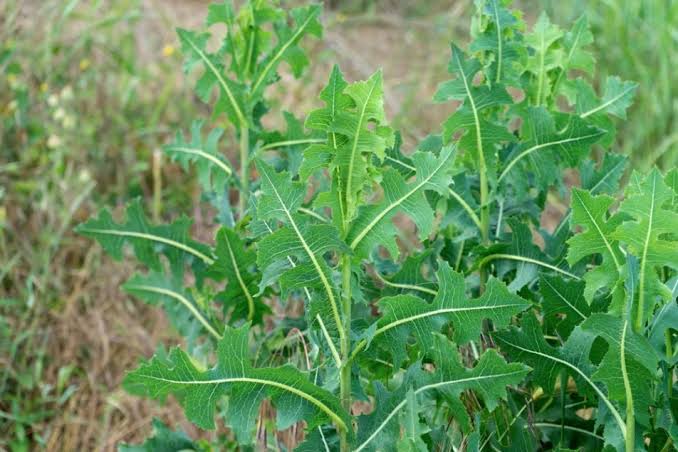 11) Jute Leaf: Jute leaf is a popular vegetable in West Africa, that contains almost all of the nutrients needed by humans. It is known as Ewedu in Yoruba, Ayoyo in Hausa, and Kere nkere in Igbo. 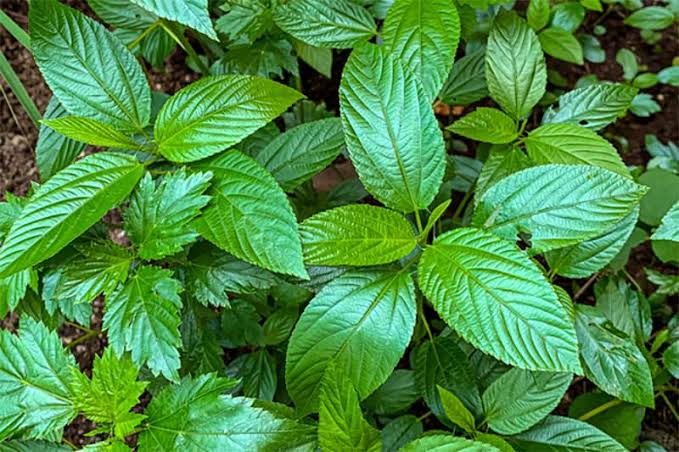 12) Neem Leaves: Neem is a natural herb that comes from the neem tree, and it works wonders on infections, burns and any kind of skin problems. It is known as Dongoyaro in Yoruba, Ogwu akom in Igbo, and Maina in Hausa. 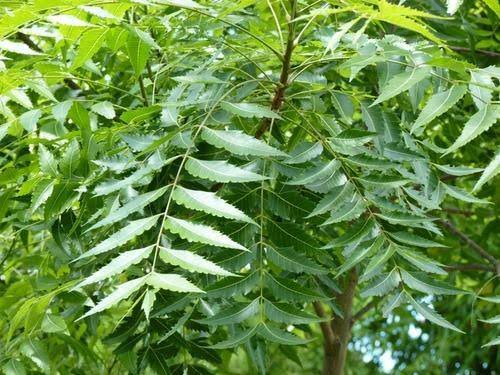 13) Fertility Plant (Newbouldia laevis): The Newbouldia is a genus of plants native to Africa, and has a range of local medicinal uses. It is known as Akoko in Yoruba, Ogirishi in Igbo, and Aduruku in Hausa. 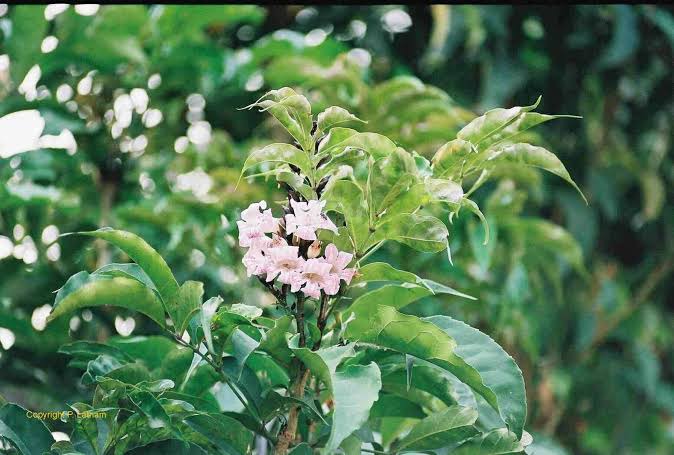 14) Moringa: Moringa is a plant native to northern India, and can also grow in other tropical and sub-tropical places, like Asia and Africa. It is known as Ewe Igbale/Igi Iyanu in Yoruba, Zogale in Hausa, and Odudu Oyibo/Okwe Olu in Igbo.

15) Lemon Grass: Lemon grass is an herb with a distinct citrus flavour and aroma, and has a good number of health benefits. It is known as Ewe Tea or Kooko Oba in Yoruba, Achara ehi in Igbo, Tsauri in Hausa, Myoyaka makara in Ibibio, and Eti in Edo. 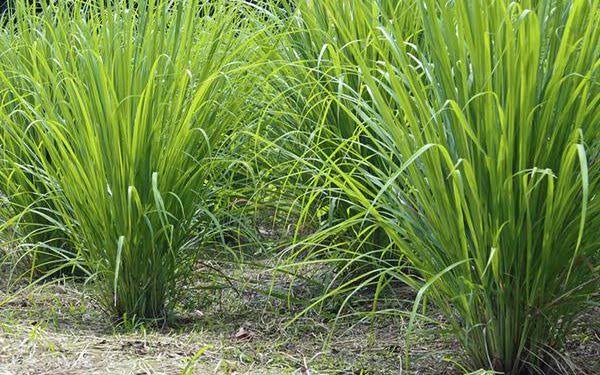 16) African Sandalwood: This plant is rare and mostly found in Africa. It is used for its scented wood and to extract essential oil, which is used for various purposes like in cosmetics as well as medicine. It is known as Iyere osun in Yoruba, Nturukpa in Igbo, and Majidi in Hausa. 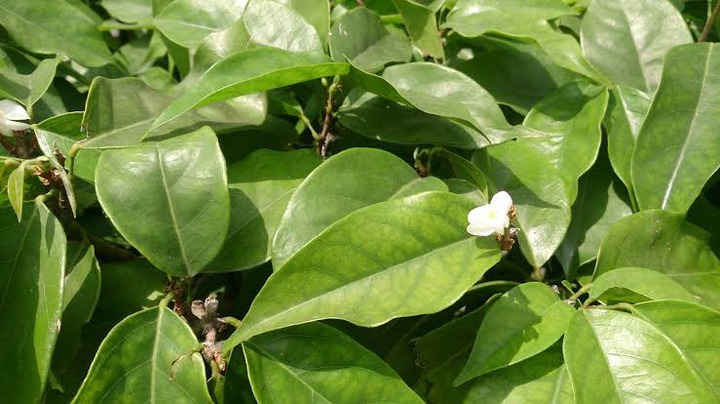 17) Henna Plant: Henna is popularly known as Laali in Yoruba, and Marandaa in Hausa. It is commonly used in Northern Nigeria, to decorate the hands and feet of brides and their guests.

18) Field Pumpkin/Squash Plant: Popularly known as Elegede/Abeje in Yoruba, Apala in Igbo, and Kabeewaa in Hausa, the field pumpkin is a vegetable with power-packed nutrients as well. 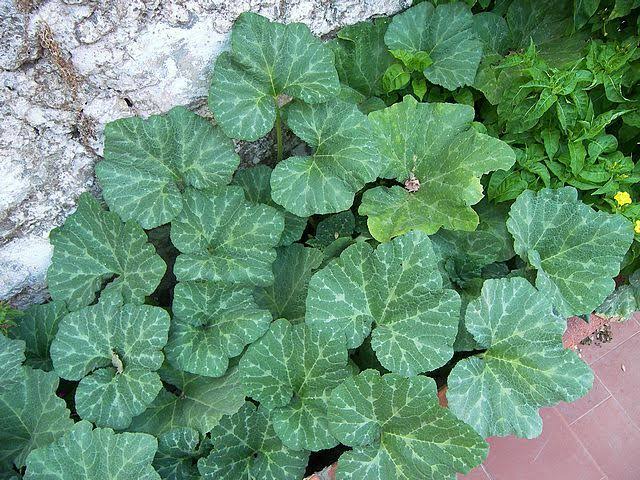 19) Siam Weed: Siam weed is a dense, tangling bush, considered as one of the world's most invasive weeds. Several parts of this herb can be used to treat wounds, burns, and skin infections. It is known as Akintola/Awolowo in Yoruba, Ebe Awolowo in Edo and Obiarakara in Igbo. 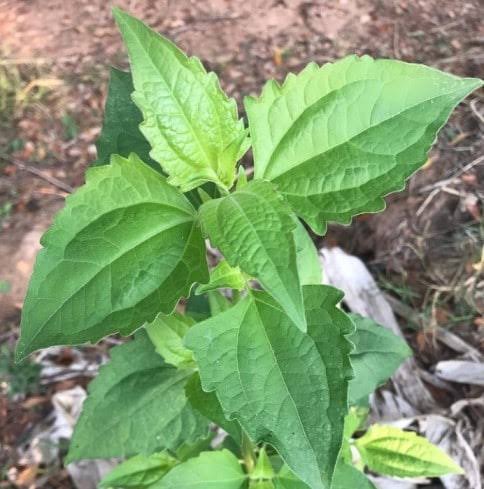 20) Garlic: Popularly known as Aayu in Yoruba, Ayo-Ishi in Igbo, and Tafarnawa in Hausa, garlic is an herb related to onion, leeks, and chives. It is commonly used for conditions related to the heart and blood system.

21) Goat Weed: Goat weed is a medicinal herb that people use to treat many conditions including hay fever, osteoporosis, and erectile dysfunction. It is known as Imi Esu in Yoruba, and Agidi-isi-awo-ocha in Igbo. 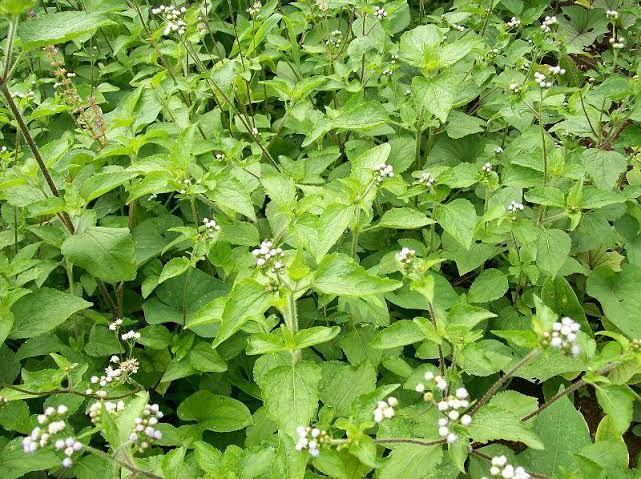 22) Aloe Vera: Aloe vera is a plant that has thick leaves with a gel-like substance inside of them. It's found all over the world, and used most times to treat skin conditions. It is known as Eti Erin in Yoruba.

23) Candle Plant/Senna Leaf: The Senna Leaf is most often used as a laxative, either to relieve constipation or in some cases, to help with weight loss. It is known as Ewe Asunwon in Yoruba and Ogalu in Igbo. 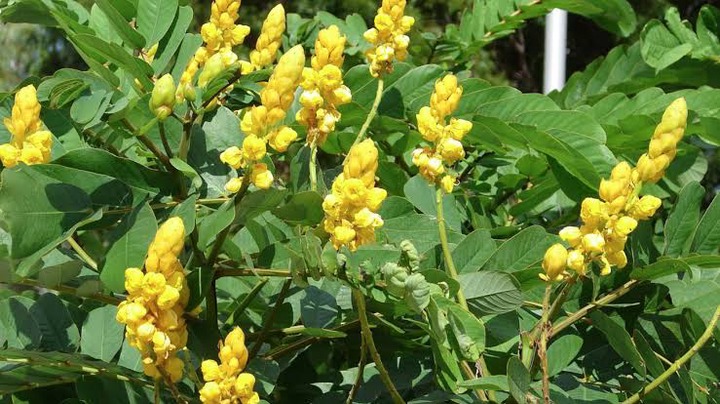 24) African Eggplant: Eggplant is a high-fibre, low-calorie food that is rich in nutrients and comes with many potential health benefits. It is known as Efo Igbo/Igba in Yoruba, and Akwukwo Anara in Igbo, and Ganyen gauta in Hausa. 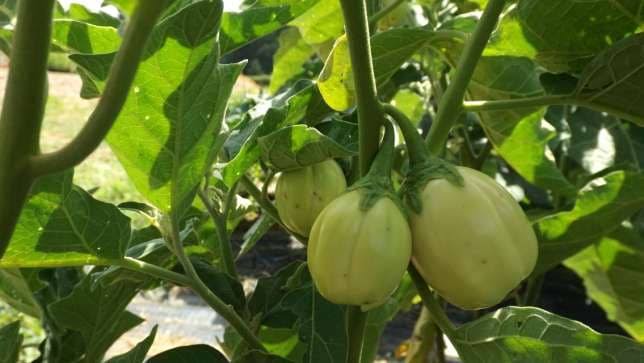 25) Mistletoe: Mistletoe is a plant that grows parasitically on trees, and is harvested for its leaves, stems, and berries to make herbal extracts, teas, and injections. It is known as Afomo in Yoruba, Awuruse in Igbo and Bokondoro in Hausa.

26) Pig Nut: Known as Olobotuje/Lapalapa in Yoruba, Olulu-idu in Igbo, and Bini da Zugu in Hausa, this plant is useful for the treatment of bacteria infections and relief from pain.

27) Fenugreek: Known as Eru in Yoruba, Mkpuru oka oyibo in Igbo, and Kimba in Hausa, fenugreek is a unique herb that has long been used in alternative medicine. People also use its fresh and dried seeds, leaves, twigs, and roots as a spice, flavouring agent, and supplement. 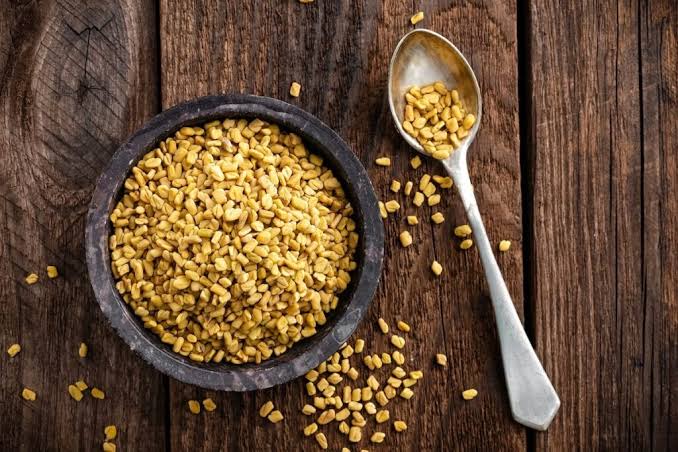 28) Turmeric: Turmeric is a member of the ginger family, and is commonly used as a spice, but it is also known for its medicinal purposes. It is known as Ata-ile pupa in Yoruba, Gangamau in Hausa, and Boboch in Igbo.

29) Cinnamon: Known as Oloorun in Yoruba, Kirfa in Hausa, and Pawuda in Igbo, cinnamon has long been used for not only making food taste better, but also for home remedies and medicinal purposes.

30) Ginger: Ginger not only adds delicious flavour to food, it’s also full of nutrients. People have been using the root for cooking and healing for thousands of years. It is known as Ata-ile in Yoruba, Jinja in Igbo, and Cithar in Hausa.

31) Mint Leaf: Mint is a leafy plant that's perhaps best known for its association with fresh breath due to the cool sensation it creates in the mouth. It is known as Ewe Minti in Yoruba, and Na'a naa in Hausa. 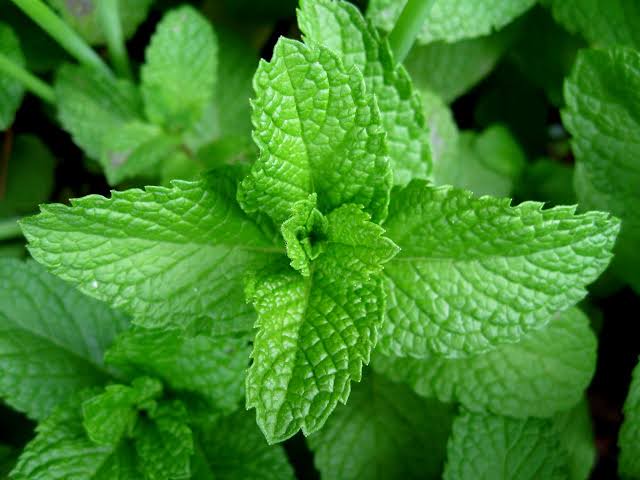 32) Wild Spinach: Known as Afang leaves in Ibibio and Okazi/Ukazi in Igbo, the wild spinach is an indigenous leafy vegetable used to prepare Afang soup and Okazi soup. It has a slightly bitter taste when used in dishes, and also has rich amounts of nutrients that are essential to the body. 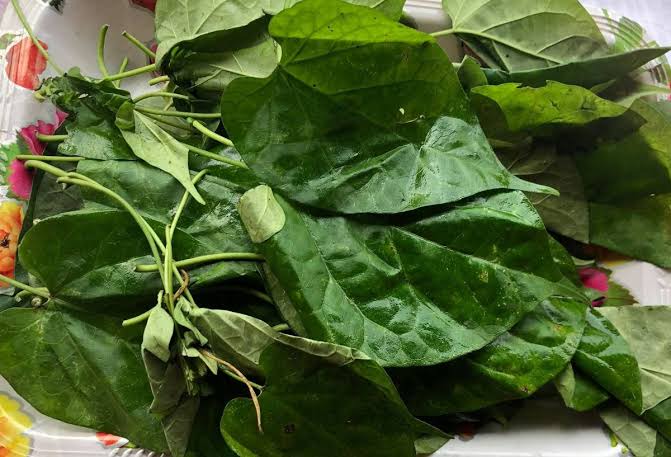 I hope you learnt a thing or two from this article?

Content created and supplied by: BestieWrites (via Opera News )