How to cook and host a shrimp boil

This Lowcountry tradition from coastal South Carolina is the easiest way to entertain this summer. Try the shrimp boil recipe Matthews demonstrates in the video above.

Every Southerner remembers their first shrimp boil. That's because it's more than a meal — it's a party. My first shrimp boil was at summer camp in Southern Georgia. There it's mostly referred to as a "lowcountry boil", as it's famous in the Lowcountry of Georgia and South Carolina.

This outdoor entertainment tradition (although it can be made indoors too) goes by many names, including Frogmore Stew, one-pot, or farmer's seafood boil. No matter what you call it, it's an easy, one-pot solution for feeding a crowd. Keep reading for step-by-step instructions on how to cook a shrimp boil, plus get ideas for how to host an awesome shrimp boil gathering this summer.

What Is a Shrimp Boil?

While shrimp boils vary from coastal town to coastal town, most contain some variation of the following: shrimp, other types of seafood, sausage, corn, lemon wedges, and potatoes. The ingredients are boiled in a large pot, typically over an outdoor cooker. Once it's ready, the meal is often served on newspaper-covered tables for easy cleanup. It's not fancy, but it's good.

The classic Lowcountry boil originated on the coastal Sea Islands of South Carolina. But there are conflicting stories as to exactly how the Lowcountry boil came to be. Some claim it was an invention of local shrimpers who used what they had on hand to make a stew, while another story goes that a National Guardsman on duty in Beaufort, South Carolina, invented the stew when he was cooking a meal for 100 soldiers.

Regardless of its origin story, the shrimp boil is without a doubt the easiest way to entertain during the summer. Whether you're hosting an outdoor gathering, or you simply want to cook a shrimp boil at home for your family, keep reading to learn how.

You can have your shrimp boil one of two ways: outdoors or indoors. For a shrimp boil cooked entirely outdoors, you'll need an outdoor cooker (like this outdoor propane burner stove from Amazon). You'll also need a large stockpot, and long-handled skimmer or a steamer basket to safely remove the shrimp and other ingredients from the pot.

However if you want to achieve the same results indoors, you can simply cook your shrimp boil in a large stockpot over the stove. Indoor shrimp boiling is a good introduction to this dish, before you decide to up your shrimp-boil game and take it outdoors.

How to Cook a Shrimp Boil Step-by-Step

We're going to be using Dave's Low Country Boil recipe from Allrecipes Community Member Lisa, who describes this recipe as, "Famous in the Low Country of Georgia and South Carolina. This boil is done best on an outdoor cooker. It has sausage, shrimp, crab, potatoes and corn for an all-in-one pot all-you-can-eat buffet!" This recipe uses crab in addition to shrimp, but you can easily omit, replace, or add ingredients as you see fit.

How to Host a Shrimp Boil — Make It a Party!

If you aren't already convinced that a shrimp boil makes the best party food I'll sum it up for you here: 1) The prep work is minimal, 2) The dishes are minimal, 3) Your guests will love it. Here are a few of our best tips for hosting the summer's best shrimp boil. 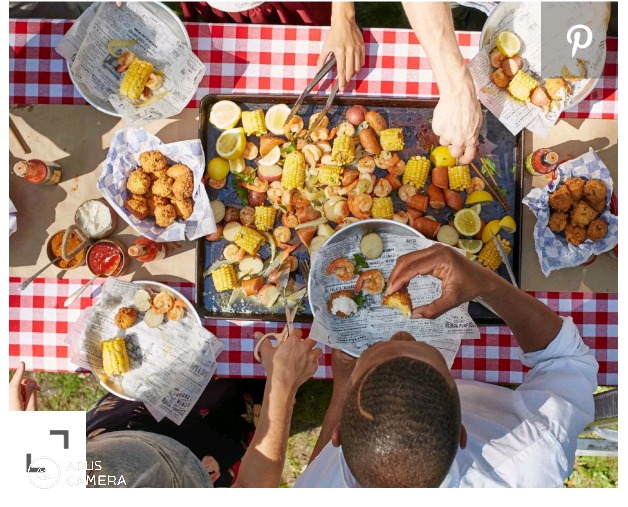 Shrimp boils are inherently communal. Forget dishes — a large pot of food is literally dumped on a table covered in newspapers instead. You'll probably want to avoid serving a shrimp boil on your prized, antique, hickory table. Instead invest in a cheap folding table from Amazon that can be stored away when not in use.

For a truly communal experience, guests can eat with their hands, just be sure to provide plenty of napkins and wet wipes (bonus points for providing these disposable bibs). And don't forget to provide butter, hot sauce, and additional lemon wedges for your guests.

The beauty of a shrimp boil is you don't need to make anything else — it's an entire meal in itself. But if you do feel the urge to add some fun sides or even dessert to the mix here are some of our favorites: Hush Puppies, Sweet Restaurant Slaw, Simple Baked Beans, Refreshing Watermelon Salad, and Banana Pudding IV.

You'll want to keep your guests entertained while the boil is roaring. In addition to beer (because, it's required) you can offer your guests some refreshing, summertime cocktailsand mocktails to help them beat the heat. Here are some favorites: Watermelon Sangria, Beer Margaritas, Virgin Cucumber Mojito, and Spicy Lemon Ginger Switchel.

And at the end of the day, don't forget to have fun! Because a shrimp boil requires so little prep work, you can spend more time with loved ones. So sit back, relax, and enjoy.

Content created and supplied by: Lovit19 (via Opera News )