The Biggest Fruit and Vegetables Ever Created (See Photos)

By Embliz (self media writer) | 1 year ago

When it comes to food shopping, we often tend to scavenge for the biggest fruit or vegetable to take home with us. But there are some out there that would require a forklift and a small team to take home instead of our own hands. Here are 10 of the world’s biggest vegetables and fruits.

It’s no secret that melons can grow pretty big with the average weight of a watermelon being around 20lb. However, the heaviest ever recorded was a staggering 350 lbs. This world-breaking watermelon belonged to Chris Kent, who grew the beast in Tennessee.

Chris presented his watermelon at the Operation Pumpkin Festival held in Hamilton, Ohio back in 2013, winning first prize.

Chris stated that watermelons “grow good in the south.” He said that he loved growing them ever since he was a kid. Watermelons usually need a minimum of 6 hours of sun and a lot of open ground as their vines spread out quickly. Surprisingly, the fruit doesn’t need too much water; farmers only usually water the plants every 3 days. If the optimal conditions are met, the heaviest these delicious fruits can grow could be as huge as 70Ibs.

They say when life gives you lemons make lemonade. The bigger the lemon, the more lemonade there is to drink, which may make it a challenge. There are lemons out there big enough to fill several jugs instead of one glass.

The Heaviest lemon ever recorded weighed a whopping 11 lbs. It was grown in Israel by farmer Aharon Shemoel back in 2003. The lemon’s circumference was 74 by 35 centimeters or 29 by 13.7 inches ; making it higher and bigger than most people’s heads.

Israel is situated between 29°-33° north of the equator which characterizes the region as subtropical or similar to the Mediterranean climate with hot and dry summers and cool rainy winters. This climate is perfect for growing citrus fruits that flourish in these conditions, especially since they need at least 5 hours of sun a day.

If lemonade isn’t your thing then you might be interested instead in the largest orange in the world; largest by circumference to be exact. Grown in the nourishing garden of Patrick and Joanne Fiedler in Fresno, California in 2006, this outstanding orange had a circumference that measured 63.5 cm or 25 in around its widest point and looked like the size of a boulder.

The last time it snowed in Fresno was way back in 1998 with only half an inch of snow so it’s not surprising that citrus fruits can grow to great lengths there.

Leeks are typically long and thick, so you’d expect them to reach a great size. But nothing can prepare you for this particular one.

Paul Rochester, who has been growing leeks in the UK for over 19 years, produced a Leek weighing 21 lbs, making it the world’s heaviest.

The leek-enthusiast uses a combination of techniques to grow the world’s mightiest Leeks. It includes supplementary lighting for 8 hours a day for one month and watering the plants twice a week for only 10 minutes. As the season progresses and the plants grow, Paul then limits watering the leeks to only 5 minutes, once a week. That’s some serious dedication but then that’s probably why he’s able to grow the world’s largest leeks.

Paul also recommends growing them inside so they can avoid the elements and thus grow even more superior.

Leeks are a very versatile vegetable that grows in places with a cooler climate and has a high tolerance to a wide range of soil types.

This 18 lb. onion is so big that if you were to risk cutting into it then your whole city will be brought to tears.

Professional Gardener Peter Glazebrook has been growing oversized vegetables for years; having successfully cultivated the record-breaking onion after trying for 25 years.

Peter loves to admire all of his record-breaking giants and he should be proud. He normally wins at every agricultural show he participates in. Peter even has his own Wikipedia page. So you know he’s a big deal in the competitive world of growing oversized vegetables.

Peter uses the same seeds from his largest onions and plants them in early winter to late spring when they can absorb as much sun before harvesting in the late summer. Onions tend to grow well in cool weather in the early part of their growth and they form bulbs as the weather warms.

Peter also recommends always watering the plants in the morning on sunny days but not if it’s cool or grey outside.

Marrows are famous for being really big but how about one weighing the same size as a baby hippo? 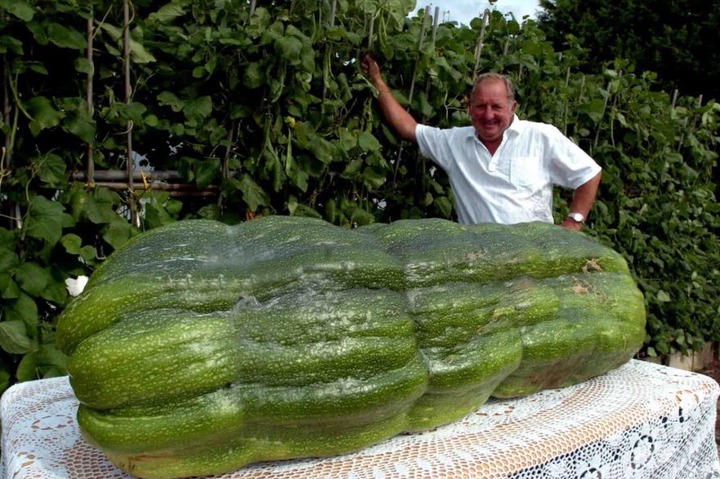 Amateur gardener Phillip Vows grew a mammoth marrow weighing 150 lbs., measuring five-foot long in only 6 weeks and arguably one of the world’s biggest vegetables. Philip is accustomed to growing big vegetables. He has produced the world’s largest cucumber previously before. Philip doesn’t seem to know himself how he manages to grow great giants. He thinks it might be down to selecting the best seeds in his allotment and a bit of luck.

Keep in mind that Philip doesn’t use fancy lights, fans, or heating like his competitors, making him quite impressive even though he’s modest about his success.

Marrows come from the same family as courgettes; in other words, if you left a courgette to grow you would end up with a marrow though you can’t eat the skin or seeds of a marrow.

Marrows are fairly easy to grow from seeds. But they do need a sheltered position in full sun and fertile soil that holds plenty of moisture. These plants also need plenty of room as they spread when they grow.

5. Can you believe this Cabbage?

This is most likely everyone’s favorite vegetable on the list, especially if you happen to be a rabbit. This world-breaking cabbage looks like something from outer space due to its incredible size.

Weighing in at 132lbs. and presented at the Alaska State Fair in 2012, this ginormous green cabbage was cultivated by Scott A Robb. Scott has previously produced other world records in the past such as the world’s heaviest turnip amongst other things.

A cabbage’s average weight is around 2 lbs. so the very big question is how did he do it?

Well, the most important thing is using giant cabbage seeds. And then placing them somewhere where they get a lot of direct sunlight. Cabbages are best suited for either spring or fall season as they rely on a lot of moisture to grow a good head.

4. Not So Sweet Potato

Despite its name, the sweet potato isn’t actually a potato It is more related to the flowering climber plant ‘Morning Glory’. Unlike potatoes, sweet potatoes are grown from long shoots known as “slips” and not from roots.

The heaviest ever grown was by Manuel Perez from Spain who produced the world’s heaviest sweet potato weighing in at 81Ib.s back in 2004.

Can you guess what these three supersized vegetables have in common? They were all grown by the same person. British granddad Joe Atherton has managed to grow a 23ft 7in or 7.21meter long beetroot, a 24ft 7in or 7.49m long parsnip and a 19ft 2in or 5.7m long carrot, all within his home.

Aside from using a special fertilizer mix – that’s surprisingly not magical unicorn manure – Joe utilizes 21 feet long plastic tubes to grow these world’s biggest vegetables. The tubes are filled with compost and positioned at a 45-degree angle to assist in drainage. The tubes also have 10-inch slots as watering holes. So when the plants are watered from the top of the tube, the water holes help the water travel all the way down.

Joe used to competitively grow vegetables with his dad. So he has a lot of experience in the extreme sport of growing huge vegetables.

If you’re extremely lucky you might find more than 10 bananas in a bunch so imagine finding 473 in one bunch. Spanish farmer Manuel Kabana managed to grow the largest bunch of bananas in the world on the island of El Hierro, Canary Islands back in 2001.

The big banana bunch weighed at 287 lbs. and was harvested on a remote farm that’s been devoted to growing bananas for over 30 years.

While that bunch is impressive, it’s surprisingly not top banana. The Rhino Horn Plantain is a hybrid banana cultivar which originated from Africa that’s up to 2 feet or 60cm long.

These bad boys can grow to 12 to 14 inches on average. The jumbo specimen can be eaten either raw or fried though sometimes they’re just grown as attractive pieces.

American Farmer Ron Wallace specializes in growing giant pumpkins, even winning 4 world championships. His powerful pumpkins can weigh as much as 2230 lbs. or even more.

Ron gives amateur farmers the opportunity to grow these gigantic pumpkins by selling their seeds, with one seed costing $100.

Growing giant pumpkins is a serious business, especially at giant pumpkin competitions – yes, that’s a thing you now know. But how is such an incredible thing achieved?

He then patented the seeds and international growers flocked in to buy them.

The weight record for giant pumpkins has since quadrupled from the last 37 years. Years of intense selective breeding combined with the perfect temperature and some TLC has resulted in the production of the biggest pumpkins in the world. A perfectly uniform pumpkin theoretically has the potential to grow to a whopping 20,000 lbs. without cracking or splitting apart.

While genetics play a vital role in the production of these mammoths, some growers also utilize mycorrhizal fungi which colonize the plant’s roots to give water and nutrients in exchange for carbohydrates, allowing the plant to store more water and thus get bigger.

Is there anything on the list that you could grow even bigger? Which of the world’s biggest vegetables did you find the most surprising? Let me know in the comments down below.

Content created and supplied by: Embliz (via Opera News )