See How I Cooked This Delicious Jollof Spaghetti With Just #500.

By SibPrecy (self media writer) | 2 years ago 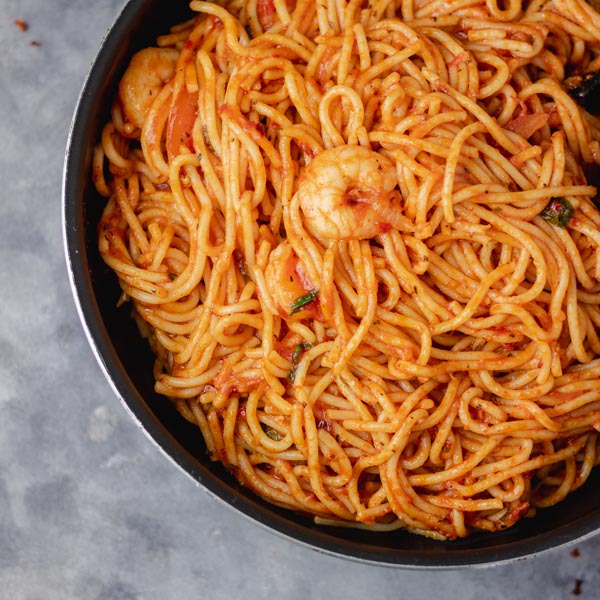 Growing up as a child was fun. All that occupied my mind was food. I was so particular about food as a child. I enjoyed every bit of food my mum prepared. My mum was a great cook though. She had a degree in cooking. She cooked all manner of meals and I learnt a lot from her.

Unfortunately, we never ate jollof spaghetti in our home. It wasn't our food and it wasn't so common back then. 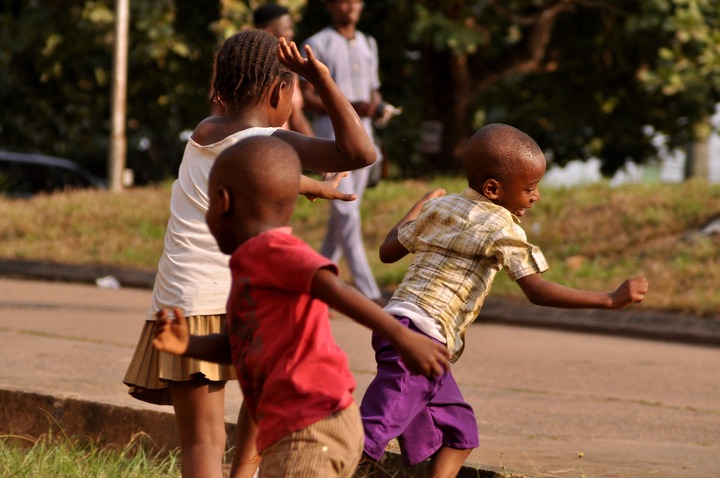 The only food close to jollof spaghetti in our home was jollof rice. That was the only 'jollof' we ate.

Although, I noticed some of my classmates brought jollof spaghetti to school. 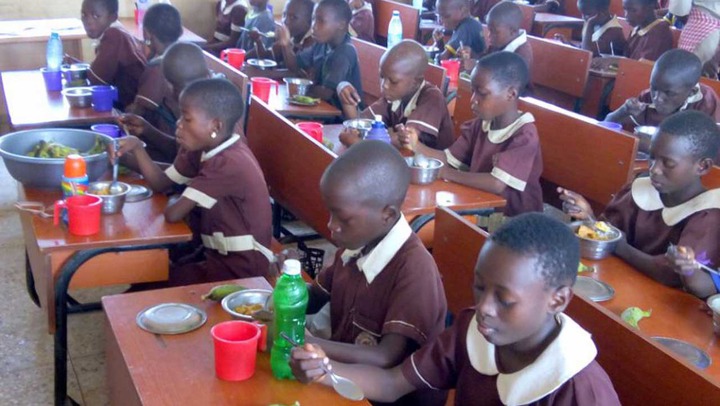 It was only white spaghetti and stew we ate at home .Some times, it was noodles mixed with spaghetti.

Jollof spaghetti must be really delicious, I thought. I decided that I was going to give it a try when I get a little bit older. 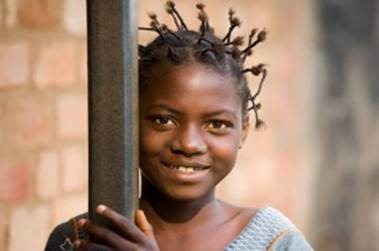 As I walked down the street, I smiled happily. I was going to prepare that 'jollof spaghetti'. The joy in me was overwhelming.

I was going to get the ingredients for my jollof spaghetti. I smiled because I remembered how I had promised myself to give this food a try.

I had listed the ingredients I wanted to buy. I wrote down the following ingredients:

3. A satchet of tin tomatoes.

4. A satchet of curry and thyme. 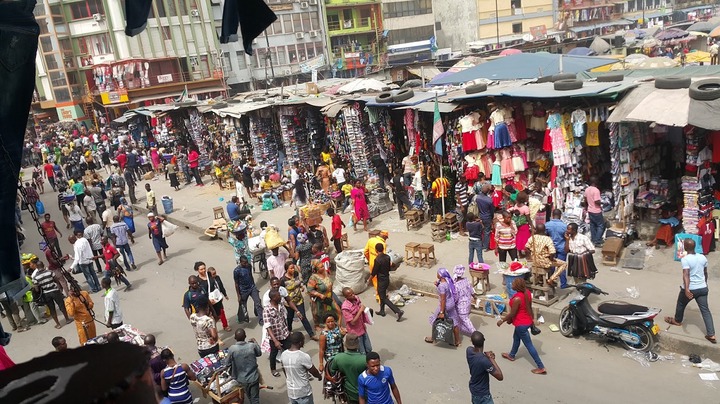 I bought Spaghetti at the price of #200.

A satchet of tin tomatoes for #50.

Onions and fresh tomatoes for #50.

The estimated money I spent was just #500. I didn't really spend much. The things I bought were sold for me at a subsidized rate.

Below are some images to illustrate the things I bought: 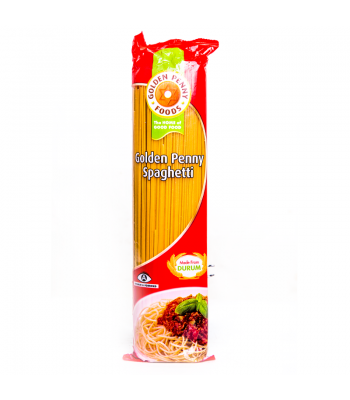 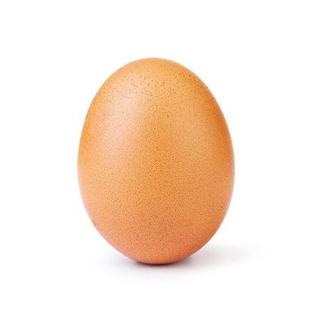 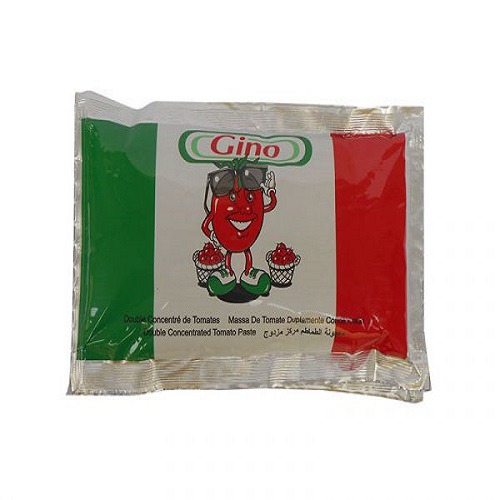 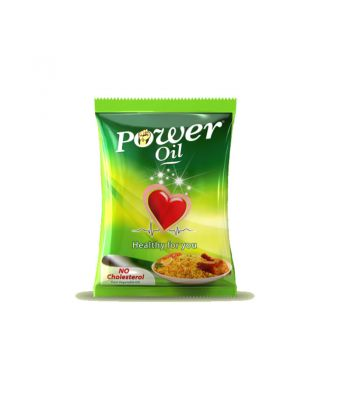 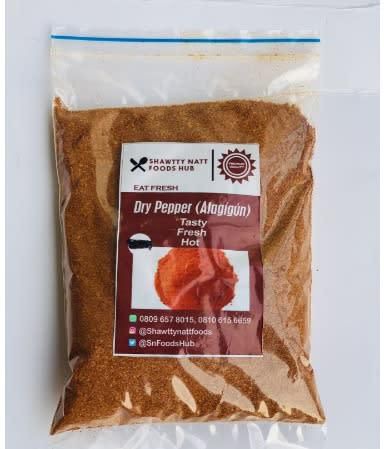 Satchet of Curry and Thyme: 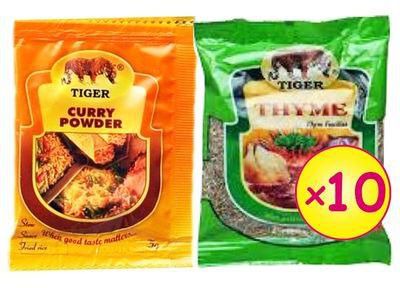 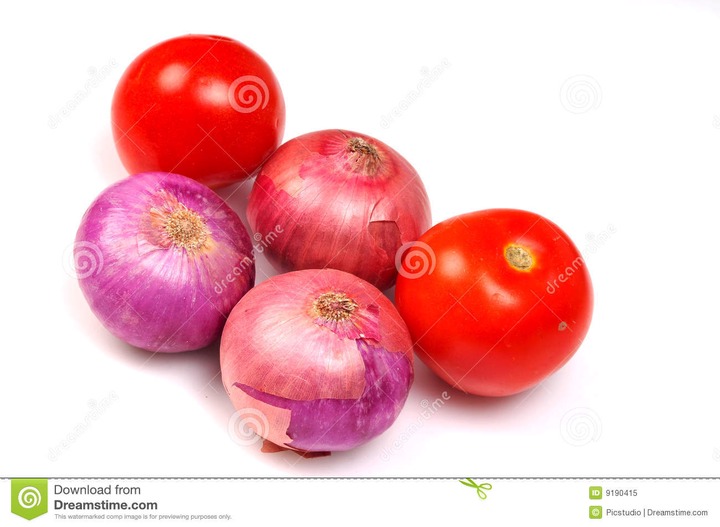 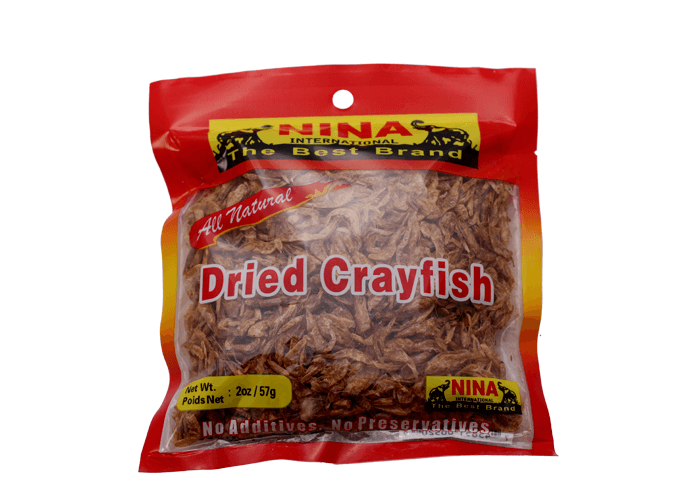 I had Maggi and salt at home, so I didn't bother to buy them.

When I got home, I was really famished so I went straight to the kitchen.

Before that day, I had watched a lot of videos on YouTube on how to prepare the jollof spaghetti. So, it all seemed like I was about to perform an experiment.

These are the steps I took to prepare my delicious food.

Firstly, I took out my pot from the cupboard and washed it thoroughly. After washing it, I filled it with a little amount of water.

Below is a picture to illustrate how I filled my pot with water: 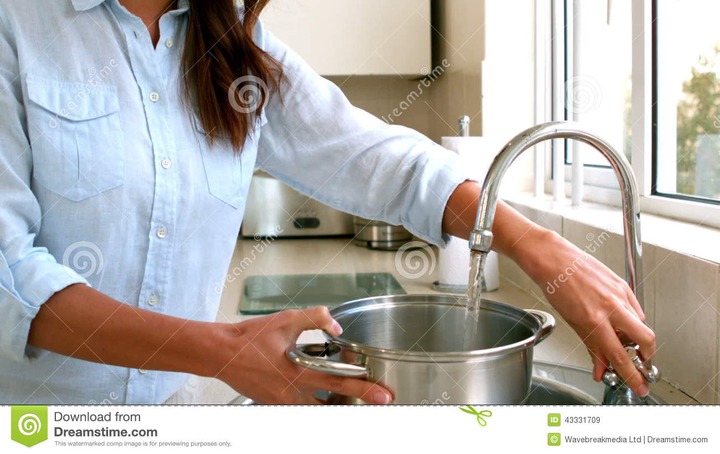 After that, I turned on my gas cooker. Then, I allowed the water to boil for some minutes. When the water started boiling, I threw my spaghetti into the pot of boiling water.

I allowed it to cook for some minutes. While the Spaghetti was cooking, I took my fresh tomatoes and onions. I washed them thoroughly and diced them into small pieces.

Below is a picture to illustrate how I boiled my spaghetti: 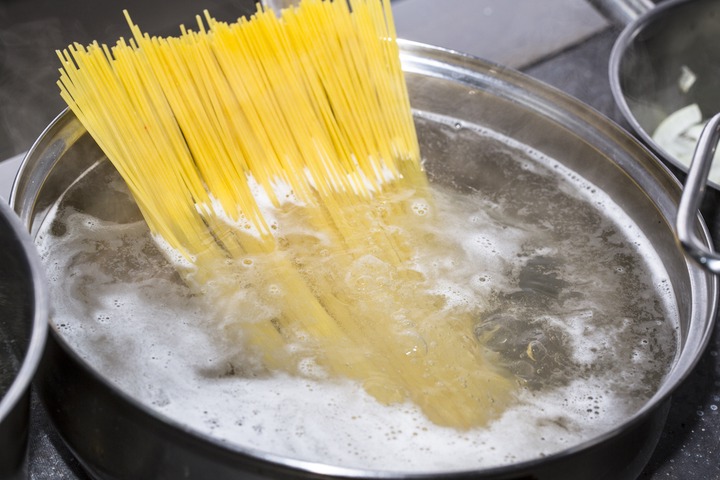 Below is a picture to illustrate how I diced the tomatoes and onions: 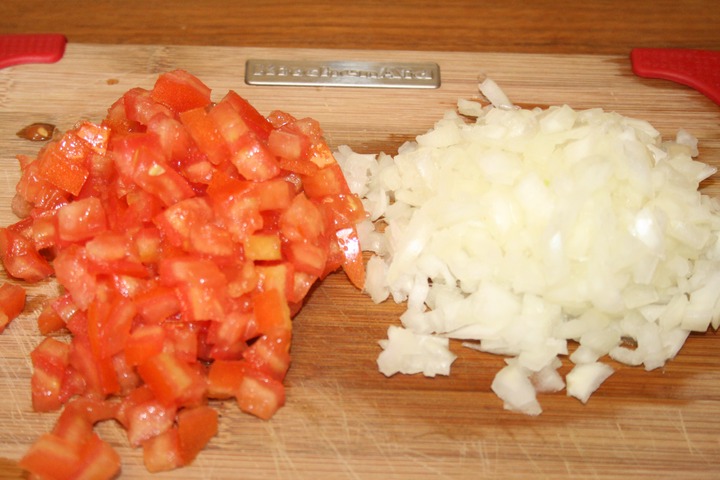 This is a picture to illustrate how my spaghetti looked like after boiling for 5 minutes: 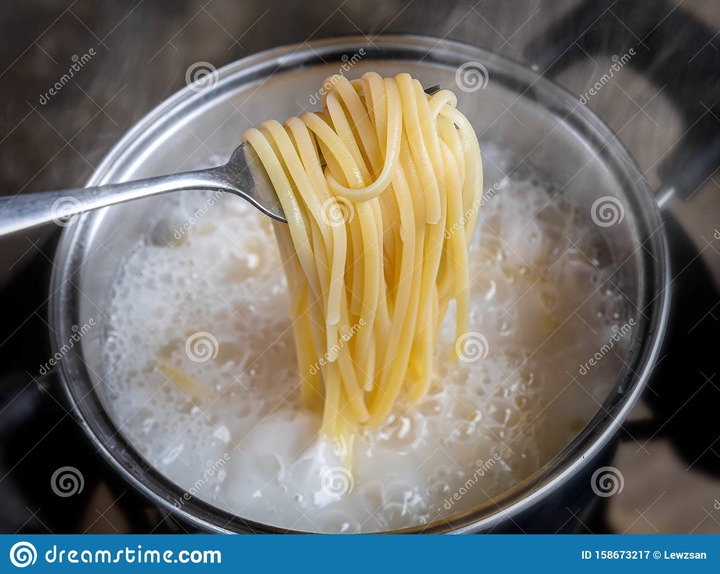 The next thing I did was to pour the spaghetti into a filter pan. This was to drain the excess water.

Below is a picture to illustrate how my spaghetti was filtered: 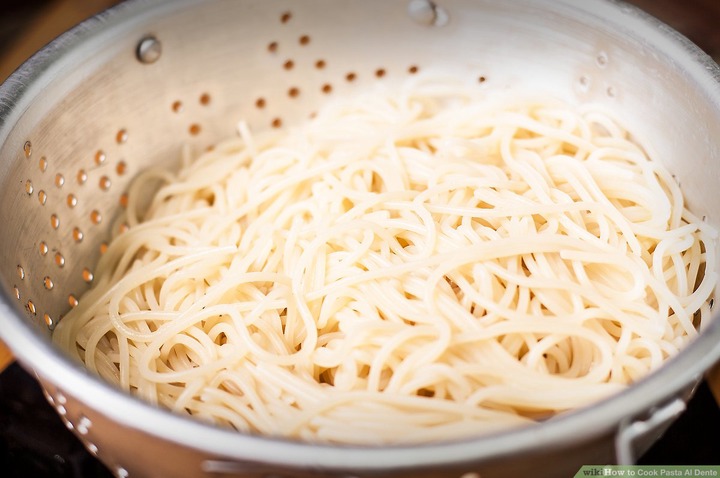 After filtering the spaghetti, I took the pot and washed it again. Then, I placed it on the gas cooker. I allowed the pot to heat up for a while. This was to dry all the water in the pot.

After that, I added my groundnut oil into the hot pot.

Below is a picture to illustrate how I added my groundnut oil to the pot: 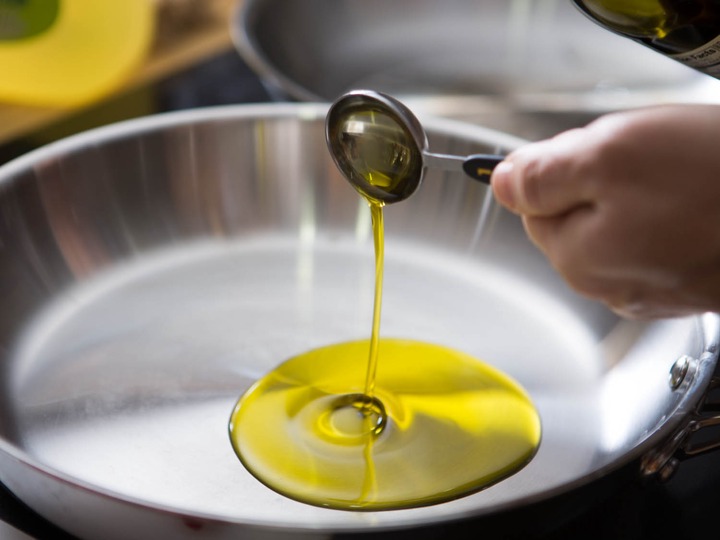 After frying it, I added the tin tomatoes to it and stirred it.

Next, I added a little amount of water. After that, I added some salt and 2 cubes of seasoning to the sauce.

I also added some curry, thyme and grounded pepper. Then, I allowed it to fry for a while.

This is a picture to illustrate how my spaghetti sauce was fried:

After the stew had fried to some extent, I poured in a little amount of water. Then, I added my parboiled spaghetti to it.

I turned the food with my wooden spatula. This is to ensure that the sauce covered all the spaghetti. I had to reduce the heat of the gas, and then cover my pot.

The next thing I did was to take out my kettle. I washed my egg and started boiling it in the kettle. I used the other side of my gas for this.

After 5 minutes, I noticed my food was almost done. I added my diced tomatoes and the other portion of my onions.

I took out the satchet of crayfish I bought. Then, I emptied it into a bowl and rinsed it. After rinsing the crayfish, I sprinked it into my spaghetti and then turned the food with my wooden spatula. I let it cook for 2 more minutes and then brought the food down.

This is a picture to illustrate how my food looked like after putting in the tomatoes and onions: 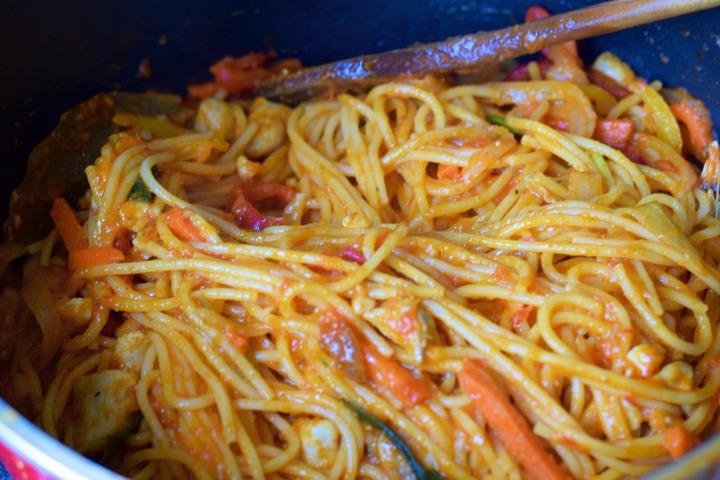 Although, the food was prepared with just #500 but, it tasted so heavenly.

Moreover, there are different ways of cooking this jollof spaghetti but I think I prefer the method I used. Other methods do not require you to parboil the spaghetti. You just add all your ingredients together and allow to cook. But this frying method I used, gave it a yummy jollof taste.

This is a picture to illustrate how my spaghetti looked like at the end: 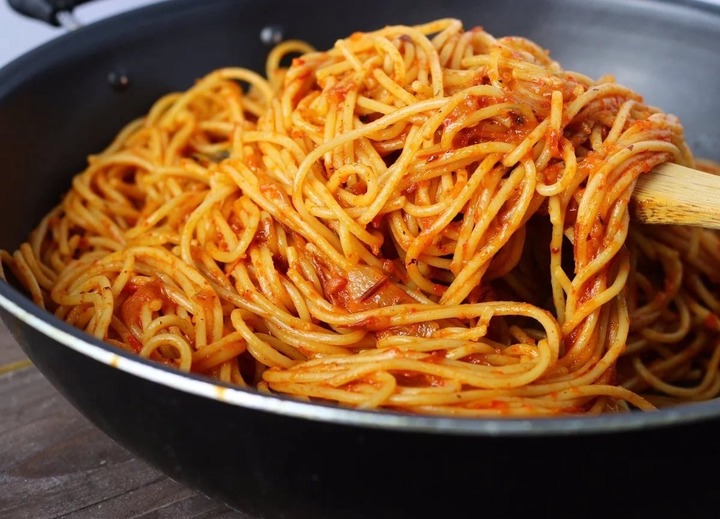 I think you should give this method of cooking jollof spaghetti a try. You would enjoy it. Don't forget to thank me when it comes out perfectly well.