By ahmedon (self media writer) | 2 years ago

One of the biggest stories of the past week has been about WWE's decision to take control of the Twitch accounts of the Superstars. The talent will receive a portion of the revenue, and it will count against their guaranteed downside. AJ Styles, who is easily the most popular WWE Superstar to have a thriving Twitch channel at the moment, finally reacted to the company's new edict during one of his recent streams.

The Phenomenal One gave his detailed thoughts and opinions on WWE's move to take complete ownership of the talent's Twitch accounts. 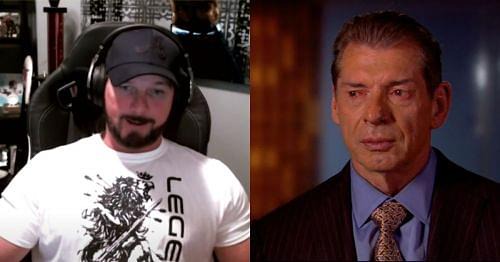 It's surprising to note that AJ Styles was informed about WWE's Twitch decision at the same time as the rest of the fans. The former WWE Champion read about the news on the internet, and he was disappointed about the lack of clarity from the WWE's end regarding the entire situation.

AJ Styles highlighted the lack of communication between the talent and the company regarding the matter.

"You'd think it'd be better than that. For guys who are on here trying to, not only work for WWE, but get on here and Twitch and stuff like that, you'd think it'd be a lot easier to communicate with us and us alone instead of whoever it is behind the scenes and them going to Joe Blow and them having more information than us. Is anything set in stone? I don't think anything is. I think it's going to come down to communication."

For AJ Styles, Twitch is not just a revenue source for the Superstars but also an excellent platform for interacting with the fans.

AJ Styles was quick to the note that the wrestlers who have their Twitch channels aren't making millions, nor are they professional gamers. AJ Styles also explained that considering the ongoing pandemic, keeping in touch with the fans using such streaming services is the best way going forward, in addition to the ThunderDome concept.

AJ Styles also admitted that the communication between the company and the talent hasn't been as great as the locker room would have liked.

"We don't get to see you; we don't get to talk to you; we don't get to do much. This is the next best thing. I don't know what they're hoping to get out of this. The communication has not been as great as we'd like. There's a lot of us who are all on the same page - we've talked to each other. We're facing the same thing. It's all doom and gloom or, 'Oh, that's all they want.' I feel like this is an opportunity for me and my channel to say, 'This is what's really going on' and debunk some stupid rumors that are going on."

Despite the communication issues, AJ Styles positively put over WWE's work environment by saying that it's a great place to work. AJ Styles and the other Superstars are only asking for a clear set of directives from the WWE about what they can and can't do regarding their third-party dealings.

AJ Styles also explained the confusion about the wrestlers being independent contractors and how WWE's rules apply to them.

"It sounds crazy, I know. Yes, we are [independent contractors]. Although, we have all these rules that we have to follow as if we are not independent contractors. That's a whole other can that you don't even want to open up, trust me. I don't want anyone else to open it up, to be honest with you. I know what's expected of me and I'd rather keep it that way. We just need to know exactly what they want when it comes to - we need to figure out what is needed of us when it comes to our platforms. It seems like a roundabout way to tell you I don't know what's going on." H/t  WrestlingInc

Former Democratic Presidential candidate Andrew Yang revealed that WWE is reportedly forcing the Superstars to sign new contracts that have a Twitch-related clause.

Hearing from talent that WWE is forcing performers to sign new contracts that include twitch. Streaming on twitch will become a work obligation and if talent doesn’t stream they will forego earnings, be suspended or face penalties. Doesn’t sound like independent contractors.

As things stand, WWE plans on taking control of the Twitch channels of the talent in the upcoming few weeks. While the backstage reactions have not been good, WWE would hope to ease out the backstage tension with some effective communication.