By Zealnews (self media writer) | 1 year ago 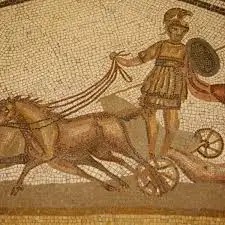 Archilles was a hero in Greek mythology and one of the main characters that participated in the Trojan War. He was also the protagonist of Homer’s epic, the Iliad. He was the son of Peleus, king of the Myrmidons, and Thetis, a nymph. Both Zeus and Poseidon were in love with Thetis, however Prometheuswarned them of a prophecy that said the son of Thetis would be greater than his father; so, the two gods decided to withdraw, and Peleus ended up marrying her. When Achilles was born, his mother wanted to make him immortal and thus, dipped him in the river Styx. However, she did not realise that his heel, by which she held him, was not touched by the waters, and so that was the only part of his body that remained mortal. According to another version, Thetiscovered Achilles’ body in ambrosia and put him on top of a fire to burn away his mortality; however, she was enraged because she was interrupted by Peleusand abandoned them.

When the Trojan War started, Achillescommanded 50 ships, each having 50 Myrmidons. He also appointed five commanders; Menesthius, Eudorus, Peisander, Phoenix and Alcimedon. After departing, they landed in Mysia by mistake, which was then ruled by Telephus. Telephus was wounded in the battle by Achilles, and could not be healed. After consulting an oracle, he was told that he who inflicted the wound would be able to heal it; so, Telephusasked Achilles to heal him, and in return he guided them to Troy.

The Iliad starts the narrative of the Trojan War with Agamemnon, leader of the Achaeans, having acquired a woman called Chryseis as his slave. Her father, being a priest of Apollo, begs the god to help him, and Apollo sends a plague among the Greeks. Calchas identifies the source of the problem and Agamemnon reluctantly consents; however, he demands that Achilles hand over his own prize, another woman called Briseis. Achilles, furious that he was dishonoured in such a way, withdraws from battle and asks his mother to convince Zeus to help the Trojans, so that he may prove himself again in the battlefield. The Trojans manage to repel the Greeks back to the shore; Patroclus, Achilles’ friend, wearing Achilles’ armor, successfully leads the Myrmidons against the enemy, but is subsequently killed by Hector, the Trojan prince. Enraged by his friend’s death, Achilles joins the battle and tracks down Hector, whom he kills in a face to face duel. He then drags Hector’s lifeless body with his chariot during the funeral games he held for Patroclus.

The death of Achilles is not narrated in the Iliad, although it was predicted by Hector with his dying breath. Paris, the brother of Hector, managed to kill the hero with an arrow that landed on Achilles’ heel, the only vulnerable part of his body. The arrow was poisoned and some sources say that it was guided by the god Apollo. Achilles was cremated and his ashes were mingled with those of patroclus. That was how the saying Achilles heels meaning weak point came about.

Content created and supplied by: Zealnews (via Opera News )