What fans are saying about Pogba after Crystal Palace game 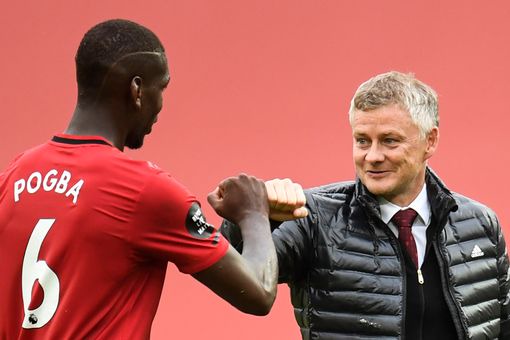 The media are too funny, they're pushing this bruno hype because of all the work they did to slander Pogba, bruno came to save the day... its a hero villain story

he deffo deserves the credit because he's done a lot but they're doing way too much. especially lately when he's dropped 2/10 performances despite his goal contributions

Pogba didn’t have a great game again tonight, which is understandable given he too is still regaining form post-injury. But as opposed to last season, we now have others who will step up for #MUFC. Most obvious being Bruno, but Marcus, Martial and Mason also accepting the onus ❤️

McTominay is causing us problems because he isn’t slapping balls, he isn’t spreading play and isn’t handling a small press like Matic. Bruno and Pogba are doing his job and it’s taking them away from their game even tho they been poor

Bruno and Pogba should be embarrassed to look in the mirror today. We can let McTom off, his nonsense is expected but from them two? Need a slap

Matic, Bruno, and Pogba complements each other... Even Lingard was feeling like Robinho.

It feels good to see that other players can step up when some of our players have a bad game. Before now , when Pogba and one of Martial and Rashford have an off day , we are doomed .

These days any of Pogba , Bruno, Rashford and Martial can step up

Beneath the established first 11, it's clear that United don't have much at all. Major work is needed to make this team challenge.

Martial and Rashford have been excellent.

Pogba had a good game too but they all love Bruno and why not.

Game changer tonight was Matic amazing how he has become the vital cog in our new set up.

Pogba and Bruno for the 2nd game in a row let the boys down, Rash and Martial needed feeding and they just weren’t at it, so our young lads fed themselves