This Blind Man Has Developed an Astonishing Ability, "He Can Now See With Sound" 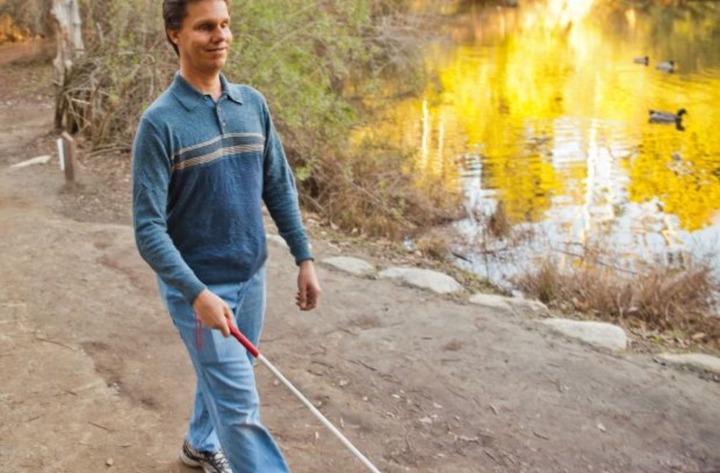 For Daniel Kish, being blind isn’t an obstacle, it’s an empowering challenge. Despite losing his sight at a very early age, this California native has defied medical odds in terms what the blind can do when it comes to finding other ways to see. Now, Kish is paving the way for others to overcome the darkness.

His story is simply inspiring.

When Kish’s parents gave birth to their baby boy, they never imagined the challenges he would face at such a young age. Born retinoblastoma, a rare form of a eye cancer, he lost his right eye at only seven month’s old. In order to save his life, his left eye was removed at 13 months, thus sentencing the toddler to a life in darkness.

However, despite his newfound disability, Kish showed an indomitable spirit at an early age. While describing his situation during a TED Talk, he joked that after his second surgery he immediately stood up and tried to walk around the room looking for the person who did this to him. Through humor, Kish has been able to overcome many different obstacles.

According to Kish, despite his blindness, at a young age, he had a strong sense of exploration. At only two-years-old, he managed to climb his neighbor’s fence. “I was in the habit of exploring whatever I sensed around me.”

Kish’s parents noticed that as a toddler, he would begin making unique clicking sounds with his tongue. And while Kish was unaware of what he was doing at the time, he eventually would discover how to use it to interact with the environment around him.

Ten years after the clicking sounds began, one of his friends realized that the “clicking” noises Kish was making were helping him listen to the echoes off of various surfaces. Each object would reverberate a different noise, which allowed him to recreate the environment in his head.

Kish’s technique of using sounds to understand his environment is formally called “echolocation” and is primarily used by bats and dolphins. “You send out a sound or a call and sound waves are physical waves – they bounce back from physical surfaces,” Kish explained. “So if a person is clicking and they’re listening to surfaces around them they do get an instantaneous sense of the positioning of these surfaces.”

While echolocation was first documented due to its use by animals, there are historical records citing its use. In fact, it’s believed that as far back as the 1700’s the process was used by the blind in order to better move about.

Many doctors and researchers consider Kish to be an inspiration due to his fascinating skills, but he downplays the praise. According to Kish, he simply learned to adapt so he could carve out his own path on how to navigate the world. “Anyone could do it, sighted or blind. It’s not rocket science,” he said.

According to Kish, he avoided using a walking stick for many years because he didn’t like being labeled as visually impaired. Thankfully, using echolation has allowed him to blend in with the public and not be identified as someone with a disability. “Blindness… should be understood – by both the blind and the sighted – as nothing more than an inconvenience.”

Thanks to his advance use of echolation, Kish has been able to push through the restraints that comes with being blind and do things most would deem impossible. He is able to ride a bike and also loves to hike. Part of his success can be credited to his parents keeping him in regular schools, which allowed him to excel in his academics.

Once Kish graduated from high school, he went on to study at several universities. He attended the University of California Riverside, California State University and CSU LA. Kish has achieved not one, but two master’s degrees, one in developmental psychology and the other in special education. While he had hoped to be a psychologist, Kish began to develop his echolocation technique instead, which he branded “flashsonar.”

In 2000, Kish decided to found the non-profit organization World Access for the Blind. Using education, psychology and training, he wanted to teach his method of “seeing” to other blind individuals looking to improve their quality of life.

Unfortunately, after launching his organization the charity was met with financial troubles after the U.S. economy was shaken from the 9/11 attacks. Funding was thin and according to Kish, his “cupboards were bare.” It was a rocky start for his new mission, but that didn’t mean he was going to give up.

Thankfully, despite the rocky start, Kish’s organization took off and he now employs coaches across the country. Since its inception, the organization has helped thousands of blind individuals regain their mobility and push the boundaries of their blindness.

One former student of Kish’s, Brian Bushway, lost his sight at the age of fourteen. According to him, he spent many months stuck on the couch listening to books on tape. Then he met Kish, and his entire world changed forever.

“He lived independently, rode his bike everywhere, had gone to college on his own. I said to myself, this guy does it all. If he can figure out how, I can, too,” said Bushway. Now, Bushway works for Kish as one of his coaches, hoping to return the favor to others who feel hopeless and in the dark.

Julee-anne Bell was another student of Kish’s who revealed he was able to change her life in eight short days. Born blind, she felt so blessed that Kish flew all the way to Australia to help her master his flashsonar method.

Even though Kish has focused his work on helping people with practical applications, he also believes that experienced users can continue to benefit with more training. “The sense of imagery is very rich for an experienced user,” he revealed in an interview. “One can get a sense of beauty or starkness or whatever – from sound as well as echo.”

Summing up Kish’s overall philosophy, his message is one of hope and positivity.

“Blind not broken, no limits and no difference. It’s not up to society to predefine limits for someone else – I tend to assume that the sky’s the limit.”