Things You Should Know About Aloe Vera

By Olatunbosun003 (self media writer) | 1 year ago 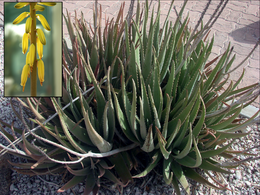 Aloe vera is a succulent plant species of the genus Aloe. An evergreen perennial, it originates from the Arabian Peninsula, but grows wild in tropical, semi-tropical, and arid climates around the world. It is cultivated for agricultural and medicinal uses.The species is also used for decorative purposes and grows successfully indoors as a potted plant.It is found in many consumer products including beverages, skin lotion, cosmetics, or ointments for minor burns and sunburns. There is little clinical evidence for the effectiveness or safety of Aloe vera extract as a cosmetic or medicine.

Two substances from Aloe vera – a clear gel and its yellow latex – are used to manufacture commercial products.Aloe gel typically is used to make topical medications for skin conditions, such as burns, wounds, frostbite, rashes, psoriasis, cold sores, or dry skin.Aloe latex is used individually or manufactured as a product with other ingredients to be ingested for relief of constipation.

There is conflicting evidence Aloe vera is effective in treating wounds or burns.There is some evidence that topical use of aloe products might relieve symptoms of certain skin disorders, such as psoriasis, acne, or rashes.

Aloe vera gel is used commercially as an ingredient in yogurts, beverages, and some desserts,but at certain high doses, its toxic properties could be severe when taken orally.Use of topical aloe vera in small amounts is likely to be safe.

Topical medication and potential side effectsEdit

Aloe vera may be prepared as a lotion, gel, soap or cosmetics product for use on skin as a topical medication .For people with allergies to Aloe vera, skin reactions may include contact dermatitis with mild redness and itching, difficulty with breathing, or swelling of the face, lips, tongue, or throat.

Aloin, a compound found in the semi-liquid latex of some Aloe species, was the common ingredient in over-the-counter (OTC) laxative products in the United States until 2002 when the Food and Drug Administration banned it because manufacturers failed to provide the necessary safety data. Aloe vera has potential toxicity, with side effects occurring at some dose levels both when ingested or applied topically. Although toxicity may be less when aloin is removed by processing, Aloe vera ingested in high amounts may induce side effects, such as abdominal pain, diarrhea .Chronic ingestion of aloe (dose of 1 gram per day) may cause adverse effects, including hematuria, weight loss, and cardiac or kidney disorders.

Aloe vera juice is marketed to support the health of the digestive system, but there is neither scientific evidence nor regulatory approval to support this claim.The extracts and quantities typically used for such purposes appear to be dose-dependent for toxic effects.

Aloe vera is used in traditional medicine as a skin treatment. Early records of Aloe vera use appear in the Ebers Papyrus from the 16th century BC.

Aloe vera is used on facial tissues where it is promoted as a moisturizer and anti-irritant to reduce chafing of the nose. Cosmetic companies commonly add sap or other derivatives from Aloe vera to products such as makeup, tissues, moisturizers, soaps, sunscreens, incense, shaving cream, or shampoos. A review of academic literature notes that its inclusion in many hygiene products is due to its "moisturizing emollient effect".