See Non-Living things in your body and how they affect you.

37 Trillion, that is the number of cells in your body.

(See don't be a lazy person, read carefully till the end and learn alot.) In comparison, your body also house up to 43 Million microscopic colonies. In other words, you have more non-human cells than actual human cells. Which means that roughly a little over 43% of you is Not Human At All, but it is not alien cells that inhabit us, rather they are microscopic organisms that have inhabited few parts of our body. 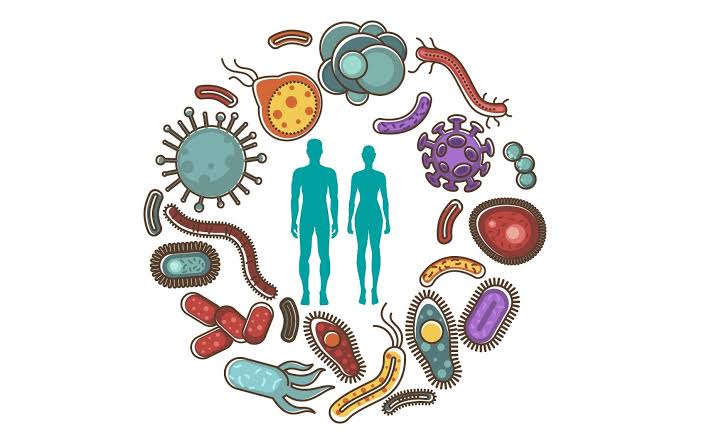 These microbes include Bacteria, Archaea and Fungi. Your Mouth alone contains around 500 to 1000 types of bacteria. Why your belly button is home to 2,368 bacteria species 1,458 of them are new to science. Just like a fingerprint, every person has a unique variety of inhabiting microbes. Together we call them a Microbiome. Personal microbiome can be compared to a biological signature, since no one not even identical twins share it. Interestingly, the microbe is unique from the moment of birth and it continues to change throughout life. Our little inhabitants go on to form and entire Ecosystems just inside of us. And a slight change in the structure of the of this ecosystem can lead to different Eating habits, disease and moods. A simple change in the diversity of the microbes living in our gut and affect how we think feel. Which is why our gud is often called the Second Brain.

Our interaction with bacteria starts before birth, by the time they are born, newborns already inherit some of their mother's bacteria which they interact with while still in the womb. And then collect more bacteria from the vaginal tract during birth. Babies continue to take in their microbiomes through skin-to-skin contact and breastfeeding children.

Microbiome rapidly changes as they grow, which depends on their ever-changing environment and physiology. Even a simple Kiss from a long-term partner can affect our microbiome. A French kiss that last 10 seconds allows partners to exchange as many as 80 Million micobes. Which eventually becomes part of their microbiome. Compared to strangers, long-term partners share similar oral microorganisms.

Thus, in a deeply extential question of who are we? We might go ahead and say we are mostly ships that carry bacteria around. But microbes that live in us are far more than tiny parasites. Sometimes our bodies become victims to bacteria that cause diseases like tuberculosis, meningitis and cholera most of the time.

However, we are inhabited by peaceful creatures that interact with our bodies in many ways. These microbes can live in our bodies, influence our appetite, immune system, emotions and even mental health. Have You ever felt this confusing urge to eat snacks, have a juice, dessert, or jusr anything after a filling meal? Well, it might not be the absence of our will after all. Apparently, we don't only feel ourselves, but also our gut bacteria which turn out to be very persuasive.

Normally, after we eat a nice meal our body secrets a statiely hormone that tells our brain to stop. This is precisely the moment microbes intervene, They can control when our body releases this hormone. Therefore, even if we are full but they aren't, we keep eating.

Another link between microbes and the Brain comes from mental health. Some studies that a cocktail of probiotics can alter brain activity. While certain types of bacteria can even change how the brain will conduct electricity. Mood disorder such as Stress, Anxiety, Depression and Autism may have been linked to disruptions in microbiology colonies in our guts.

Patients who suffer from depression often show an abundance of chemicals that lead to inflammation. This same chemicals are produced by gut bacteria when there is a disruption in the microbial ecosystem along with diet and environment.

Our inhabitants can be influenced by our Nature. Human Genetics can also determine genetics which microbes get to colonize our body, and which are immediately stopped or made to pass through the ecosystem like a temporary guests.

This means that human metabolism and whether we develop disease like Obesity and Diabetes later on in life can be predicted at birth by looking at our microbiome. Revealing the secret of this complex relationship, we have with microbes can lead us to a better understanding of how our body reacts in terms of eating habits, mental health and diseases.

Soon enough, we might come to a future where every person will have their own microbiome passport that would carry details of the number and types of microbes residing in them.

But the more fascinating future would be the one, by simply changing our microbiome we could manipulate the host (human) from curing diseases all the way to changing personality.

Content created and supplied by: 24/7updates (via Opera News )

Archaea Fungi Microbiome Non-Living Not Human At All