Hardworking Nurse is Denied her World Record for a very Stupid reason.

Jessica Anderson of London, England, is kind of a superhero. The nurse saves lives daily at the Royal London Hospital, and her other power is super speed. She runs circles around pretty much anyone (okay, maybe not Usain Bolt). Knowing full well that her running abilities were next-level, Jessica made it her mission to run the London Marathon in 2019. And because saving lives is kind of her thing, she vowed to compete on behalf of a charity.

Jessica pledged to run for Barts Charity, which “supports the hospitals of Barts Health NHS Trust” and “funds extraordinary healthcare to help patients and staff,” according to its website. The organization held a special place in her heart. “I’m fundraising for Barts Charity to support the work of the wonderful staff on the Acute Admissions Unit at the Royal London Hospital, where I have worked for nearly seven years,” she proudly wrote on the social media platform dedicated to giving, appropriately called JustGiving.

“We have previously used the charity fund to buy equipment for the ward such as dementia-friendly clocks and signage, a bladder scanner and some furnishings for the staff room and day rooms,” she explained in her post.

Jessica wanted to represent her healthcare background during the marathon in yet another way, so she pledged to run the 2019 London Marathon in her nurse’s uniform. She had a particular record in mind.

“I will be attempting to break the record for the fastest marathon in a nurse’s uniform by a female runner!” Jessica announced online. The time to beat for a full 26.2 mile race was three hours, eight minutes, and 54 seconds. Though that’s pretty darn zippy, Jessica wasn’t intimidated. 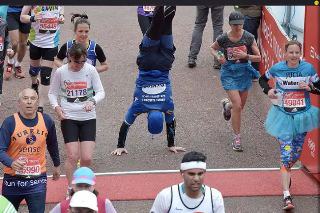 What did that mean exactly? The RN wore her scrubs to work every single day, all while saving lives and taking names. Guinness World Records, however, wrote that her nurse’s uniform too closely resembled a doctor’s uniform, therefore making her ineligible 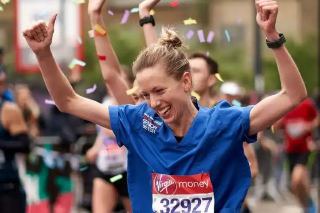 See, the original record was set by nurses wearing dresses. But nurses haven’t worn dress uniforms since around the ’80s, though some wore the nurse pantsuit in the ’70s. Guiness World Record reps told Jessica that, although outdated, the uniform guidelines were necessary.

But because Jessica was a proud, empowered nurse, she didn’t listen. She ran the London marathon as she intended: in her royal blue scrubs. Crossing the finish line with a smile, she looked for her time on the clock.

She beat the record! After crossing the finish line at a record time of three hours, eight minutes, and 22 seconds, Jessica posted about her victory on Instagram, making sure to call out Guinness World Records in her announcement. 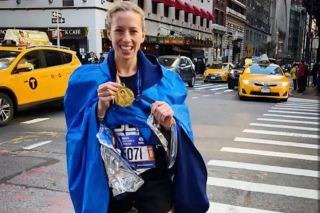 After thanking friends, family, and running buddies for their undying support, she wrote “Ps. @guinnessworldrecords this is what the fastest female marathon runner in a nurse’s uniform ACTUALLY looks like (3.08.22).” Go Jessica

After Jessica spoke to several media outlets about her predicament, her story went viral, and internet users around the world took her side. Specifically, Jessica spoke with Runners World magazine about her feelings regarding Guinness World Records’ stance.

“I’m sure Guinness World Records don’t intend to cause offense but it would be nice if they decided to revise their criteria instead of reinforcing old gender stereotypes,” she continued.

Her righteous internet supporters started a viral hashtag, #WhatNursesWear, which inevitably had Guinness World Records reps feeling like they made a big mistake.

Guinness’ senior vice president, Samantha Fay, then made a public statement admitting, “It has become quite clear to Guinness World Records that our guidelines for the fastest marathon wearing a nurse’s uniform were outdated, incorrect and reflected a stereotype we do not in any way wish to perpetuate.” “We have taken the decision to no longer allow fancy dress clothing for this category and will introduce guidelines which reflect the clothes worn by nurses in the UK and around the world,” she continued.

Incredibly, Guinness World Records awarded Jessica with the world record she earned! The outspoken healthcare worker emerged as a role model to girls and women everywhere, and other athletes joined her fight — even those who were constantly underestimated.