By Taiyemm (self media writer) | 1 year ago

NCDC( Nigeria Centre for Disease Control) revealed that total suspected cases of 19305 including deaths of 479 have been recorded in 18 states and the FCT since the beginning of the year.

What do you need to know?

Vibrios are short and curved( measure about 2 μm × 0.5 μm )gram-negative bacilli which are motile, nonsporing, and oxidase-positive organisms. This genus comprises 33 well-defined species of which 11 have been isolated from clinical specimens obtained from human beings. Vibrio cholerae and V. parahaemolyticus are two important species of this genus.

They grow at a temperature of 20-37 degrees centigrade.

How do the organisms cause cholera?

Cholera is transmitted through the faeco-oral( through the mouth and passed as feces) route by infected food or water.

In a normal individual stomach acid acts as a moderate barrier for Vibrio cholerae.

Food and alkaline materials facilitate bacteria to cause infection even in small doses of up to 1000 to 10000 bacteria. The mucus barrier of the small intestine prevents the attachment of bacteria to the epithelium.

To overcome this, it is believed that bacteria make use of their motility, chemotaxis, and production of enzymes.

Once Vibrio cholerae adhere to the epithelium, diarrhea is produced by cholera toxin. They are not invasive.

After 2–3 days, abrupt onset of the disease occurs.

The initial signs are vomiting and diarrhea(fluid is watery contains electrolytes such as sodium chloride, potassium, and bicarbonate).

The person develops sunken eyes and cheeks and the skin becomes wrinkled due to loss of fluid.

Death may result from rapid dehydration and resulting electrolyte imbalance. Without treatment, the case fatality rate may reach 60%, and with treatment around 1%.

How can you prevent cholera?

2.Water purification systems are the most important preventive measures;

3.Rapid detection, isolation, and treatment of patients and carriers are also important.

A killed vaccine has been used for many years but is not highly effective. 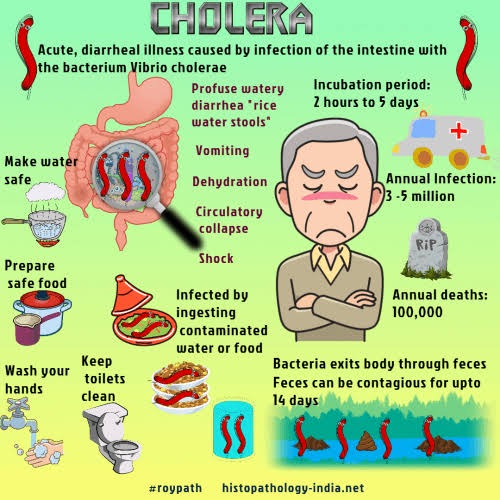