Symptoms That May Show You Have A Kidney Infection, Causes, Complications, And Foods To Avoid

By Olaoyin6 (self media writer) | 1 month ago

The kidneys are two bean-shaped organs that are placed midway around the belly and below the rib cage. They are primarily responsible for the filtering of blood and the elimination of waste from the body. There will only be a dangerous buildup of wastes in the body if the two organs are not functioning properly or if they are unable to perform their tasks to the best of their ability. This could, in turn, lead to other issues or death. 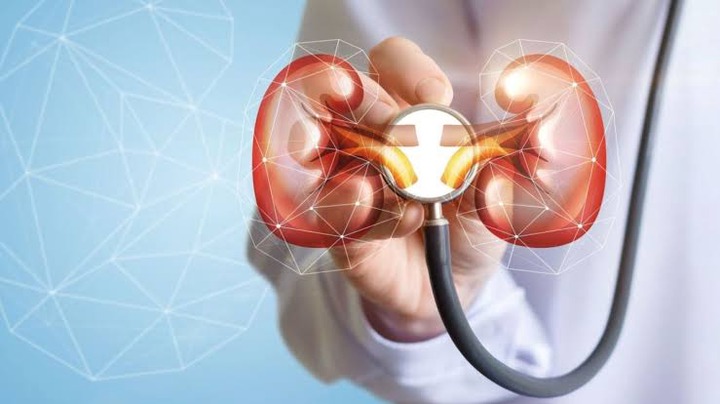 This is due to the fact that a kidney infection might cause lasting damage to your kidneys in the event that it is not treated in a timely manner or appropriately. Another possibility is that the germs may swiftly move to your bloodstream, which would result in an illness or scenario that is really life-threatening. Antibiotics are typically the first line of defense in the battle against kidney infections, and the patient may need to be hospitalized for the duration of their treatment.

Pyelonephritis is a kidney condition that may be fairly dangerous, but fortunately, it does not disguise its presence in the body because it reveals specific signs and symptoms that can often assist to announce its presence in the body. These signs and symptoms include: Fever, chills, pain in the back, side, or groin area, abdominal pain, frequent urination, nausea and vomiting, a strong urge to urinate at all times, burning sensation or pain when urinating, and urine that smells badly or is cloudy are some of the signs and symptoms associated with a kidney infection.

As was mentioned earlier, a kidney infection should not be taken lightly since, if untreated, it can lead to a range of life-threatening problems. One of these issues is renal scarring, which, in turn, can lead to chronic kidney disease, high blood pressure, and kidney failure. In addition to causing blood poisoning, a kidney infection that is not treated properly can cause women to experience difficulties during pregnancy.

Taking some measures that are known to help minimize the risk of urinary tract infections can significantly lower one's chances of having a kidney infection as a result of such measures. The following are some of the preventative actions that can be taken to avoid getting a kidney infection:

2. If you feel the need to urinate, do so as soon as you can.

3. After having sexual contact, it is important for women to empty their bladders as quickly as possible.

4. After urinating or having a bowel movement, it is recommended that women wipe their bodies thoroughly, moving from the front to the rear.

People who have renal problems of any kind are typically given the recommendation to steer clear of, carefully monitor, or otherwise restrict their consumption of particular foods because those foods have the potential to make their kidney functions even worse. The following is an examination of a few of the foods that ought to be avoided, in particular by individuals who have troubles with their kidneys:

In addition to having a high caloric and sugar content, dark-colored sodas have an extremely high amount of additives that contain phosphorus. Phosphorus is a nutrient that has been connected to the progression of kidney problems such as pyelonephritis and kidney infections.

Avocados, despite the fact that they are associated with a number of health benefits, are not an ideal food for individuals who have renal or kidney issues. This is due to the fact that avocados are extremely abundant in potassium, another essential nutrient that, unfortunately, should not be consumed in excess by individuals who have renal issues.

Bananas are one of the most consumed fruits in the world and are frequently praised for the numerous positive effects they have on one's health. However, those on a renal diet need to be careful about how much they consume of them because they contain a high amount of potassium, which might impair kidney function in those who already have the condition.

When you have a kidney infection or another illness that affects your kidneys, dairy products are another type of food that you should consider avoiding or consuming in moderation. This is due to the high levels of protein, phosphorus, and potassium that are found in dairy products. Because dairy products have a tendency to induce a rapid accumulation of protein waste in the blood, it is strongly advised that you limit the amount of dairy you consume.

It is commonly accepted that processed meats, including hot dogs, bacon, and sausage, are unhealthy for a variety of reasons, and they are frequently one of the typical perpetrators in many instances of chronic diseases. They have an exceptionally high salt and protein content, both of which are elements that are thought to be detrimental to the health of individuals who have kidney issues.