Thor vs Lobo: who would win in a death match. 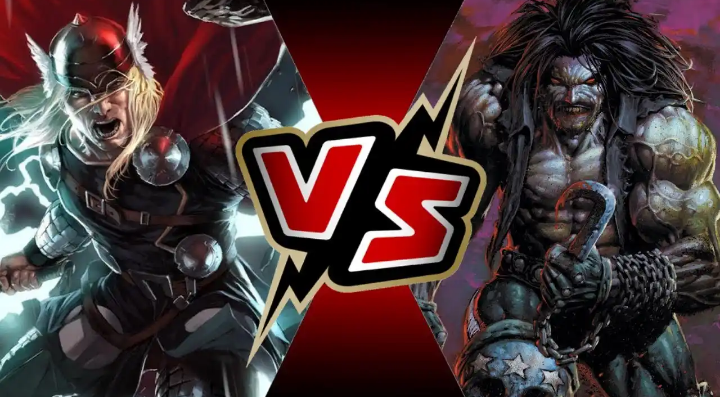 Look, either way, this match will be worth seeing but I say The Main Man will go Ragnarok on Odinson’s l.

Firstly, as powerful as Thor is, he’s died a few times (Hey blame Fraction, not me) proving that, while difficult, is still possible to kill him. In terms of endurance, Lobo has the edge due to him being functionally immortal having been kicked out of heaven, hell and who knows where else for being too damn violent. Logically, this would extend to Valhalla, Hell etc. Keep in mind that Thor and company aren’t truly immortal as they need to periodically consume the Golden Apples of Iddun in order to keep on rocking, a fact often glossed over by most writers. The -One-Who-Eats-Your-Entrails can pretty well take anything the Overgrown-Swedish-Supermodel-Beefcake can dish out with his hammer and can simply outlast him to the point that Thor collapses without getting his Fantastical Fruit Fix. Also, Thor isn’t exactly known for his intelligence- when you can bench press the titanic, who needs it. Granted he has bright ideas ocasionally, but the number of times he’s been decieved by Loki is ridiculous, even in the old myths when they worked togeter, the Trickster God did all the thinking. Lobo is a genius when it comes to all things destructive, he engineered a virus that killed off the ENTIRE POPULATION OF HIS HOME PLANET FOR FRAG’S SAKE. The main reason he rarely displays that intellect is that it’s much easier for writers to have him break things rather than a lay out a carefully designed, deviously brilliant scheme, although Lobo would probably prefer to get his hands bloody. Speaking of Viruses, Thor is immune to all Earthly diseases, but it wouldn’t be difficult for Lobo to engineer a special chemical cocktail designed to give the Asgardian an excrutiating death. Admitedly it’s unlikely that Thor would give him the chance to create it, this is assuming there’s some prep time.

Additionally, we factor in Lobo’s bitchin’ Space Hog, current possesion of a RED LANTERN RING and the fact that he killed Santa Claus and the Bo will be force-feeding the Macho Metro his own dinky winged helmet. It may take until the end of the universe, but it’s gonna happen.