By People'sDaily (self meida writer) | 11 days 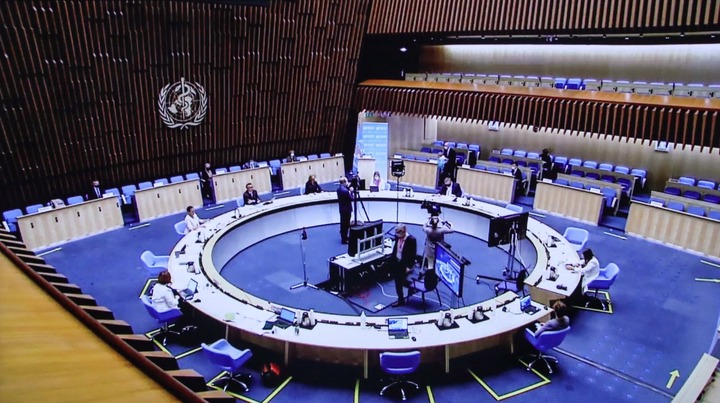 Photo taken on May 24, 2021, shows the live stream of the 74th World Health Assembly (WHA) held at the headquarters of the World Health Organization in Geneva, Switzerland. (Photo/Xinhua)

During the 74th World Health Assembly held from May 24 to June 1, the international community generally looked forward to heightening global anti-epidemic cooperation so as to defeat the virus and resume economic growth at an early date.

However, some U.S. politicians and media outlets recently brought up again irresponsible conjectures that the COVID-19 escaped from a Chinese lab, which had been proved untrue by scientific research, attempting to concoct a new round of conspiracy theories regarding the origins of the virus and pull a political trick to defame and scapegoat China for the outbreak.

Such a wicked deed of the U.S. shows no respect for science and no sense of responsibility for people's lives, and will certainly wreck global anti-epidemic cooperation.

Tracing the virus is a serious and complicated issue in science, and conclusions should only be reached on the basis of science.

According to a report released by the World Health Organization (WHO) based on a joint WHO-China study of the origins of COVID-19 on March 30, the novel coronavirus is "extremely unlikely" to have leaked from a lab.

The joint study, carried out by both Chinese and foreign experts, led to a consensus based on scientific research and facts, which means that its findings are objective, scientific, and authoritative.

The foreign experts involved in the joint study, all selected by the WHO, come from 10 countries and the WHO. The members were representative and independent in the research, a sure thing beyond question.

China has always been honest and sincere in tracking down the origins of the virus, and set an example of promoting international cooperation on finding the origins of COVID-19.

Though faced with daunting tasks of controlling the pandemic at home, China invited WHO experts over for investigations into the origins of COVID-19 and provided necessary support for their work in Wuhan, an epicenter of the virus in the country, exhibiting an open, transparent, and responsible attitude.

Many foreign experts said that China's openness was unexpected, and the trip to Wuhan showed surprising results.

Many evidences, reports and studies suggest that the epidemic appeared in many regions around the world as early as the second half of 2019. It was reported that the virus may strike the U.S. earlier than the country officially reported the first confirmed case.

While asking China to participate in comprehensive, transparent, evidence-based international investigations, the U.S. should certainly do the same. It should take a scientific attitude, work with the WHO immediately on the study of virus origins, conduct comprehensive, transparent, and evidence-based research at home, and actively respond to the concerns of the international society.

Some U.S. politicians and media outlets have completely ignored facts and science, and paid no regard for the doubts in their way of tracing the virus and the painful failure in the domestic fight against the epidemic. Instead, they have been engaged in starting and spreading rumors, and even blatantly ordered intelligence agencies to dig into the source of virus.

It is evident that they don't care about facts or truth, and have no interest in scientific and serious virus tracing. All they want is to stigmatize other countries and conduct political manipulation by taking advantage of the epidemic.

The U.S.'s accusation that a Chinese lab leaked the virus is supported by "much conclusive evidence" as it used to accuse Iraq of having chemical weapons, as ironically put in an article published recently on the website of Russia Today, a Russian state-controlled international television network.

The U.S. political manipulation has been opposed by the WHO and the international scientific community.

Only by respecting science can countries effectively trace the virus, and only by seeking cooperation can they eventually defeat the epidemic.

Facts have proved that politicizing the epidemic, stigmatizing other countries, and political maneuvering haven't made the U.S. any stronger against the virus, but have only hindered international anti-pandemic cooperation and caused greater harm to people in the world.

On such a major issue related to global public health security and people's lives, the U.S. chooses politics over science for their own self-interest. Its despicable act will never be accepted by the international community.

(Zhong Sheng is a pen name often used by People's Daily to express its views on foreign policy.)

Six Facts You May not Know About Your Children

"Not My Size, But Who Cares? - Actress Mimi Ubini Says As She Shares New Stunning Picture On Instagram

I Don't Have N1.5 Million To Give To The Police And My Husband Is Not An IPOB Member - Woman Says

Two members of the Ekiti APC have been suspended for allying with a pro-Tinubu organization.