By Boysun (self media writer) | 2 years ago

Do you know the leading cause of death in the USA for both men and women? It’s heart attack and it’s responsible for over 1 million deaths every year. It’s usually a result of the most common heart disease, coronary artery disease.

According to statistics, this year alone we’ll have 920.000 new heart attack cases and as much as 50% of them will happen to unsuspecting Americans, without any warning signs.

If such a situation does occur, you must react quickly or otherwise part of your heart muscle will start dying off and become scar tissue which can cause even more serious issues in the future. 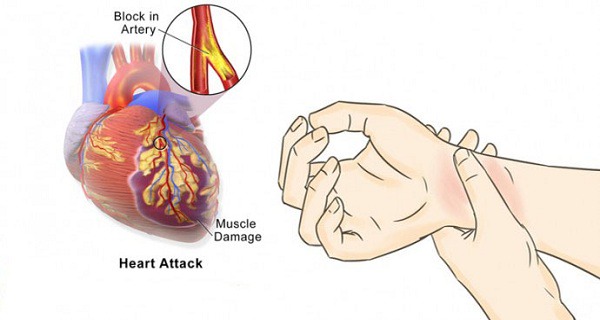 This life-threatening condition is very serious but what many people don’t know is that it can be completely prevented and avoided if people just made some crucial lifestyle changes. As we already know, our lifestyle is a big factor in our cardiovascular health.

Researchers at the Karolinska Institute conducted a study which showed that just five healthy lifestyle changes could reduce first-time heart attacks in men by 80%. Here’s what they said:

“It is not surprising that healthy lifestyle choices would lead to a reduction in heart attacks… What is surprising is how drastically the risk dropped due to these factors.”

A similar study was conducted in 2004 by INTERHEART, which examined heart disease risk factors in over 50 countries worldwide and discovered that 90% cardiovascular disorders can be entirely prevented if certain diet and lifestyle changes are implemented.

What are these crucial lifestyle changes that play such an important role in cardiovascular health?

What Is a Healthy Diet for Your Heart?

Contrary to popular belief, the worst foods for our heart aren’t saturated fats like butter, lard or eggs, it’s the refined sugars, carbs and processed foods that do the most damage.

People often get confused about this issue because it’s common belief that high LDL cholesterol levels, also known as “bad” cholesterol, lead to cardiovascular diseases and saturated fat can increase LDL in your blood. However, what is unknown to most people is that there are TWO kinds of LDL cholesterol particles:

If you want to preserve your cardiovascular health you need to avoid trans fats and processed foods entirely. This means that fast food and junk food is completely off the table. Then, you have to get your insulin and leptin resistance under control. The high intake of sugars and grains has probably disrupted the balance and caused an array of problems. If you want to reduce the risk of cardiovascular diseases and prevent a heart attack you need to follow some basic rules:

It’s been scientifically proven that the majority of people lack fat in their day-to-day diet and this need to be improved for optimal health. Everyone should increase the healthy fat intake by at least 50-85%. To do so you should consider eating more:

If you want to have a healthy heart you need to restore the balance between omega-3 fatty acids and omega-6 fatty acids. The combination of these two ingredients participates in the formation of cells in the arteries, responsible for prostacyclin, an ingredient which enables smooth blood flow. The lack of omega 3 can cause a long list of health disorders and be the major risk factor in more than 96 000 premature deaths every year. Experts recommend that you limit your consumption of vegetable oils and eat more wild-caught oily fish like sardines and anchovies. You can consider taking a high-quality krill oil supplement.

Is Fruit Good for Your Heart?

A study presented at the ESC Congress in Barcelona this year revealed some amazing discoveries. The study showed that people who regularly consumed fruits had a 40% lower risk of any type of cardiovascular disease and a 32% lower risk of death from any cause in comparison with people who didn’t.

Fruits abound in antioxidants, vitamins, minerals, and other phytonutrients which can improve your cardiovascular health and prevent inflammation. According to a study from the British Medical Journal eating just one apple a day can lower the risk of cardiovascular disease and death from heart attack in people over 50 years, having similar effect as statin drugs.

Still, everything should be in moderation, and this goes for fruits as well. You should especially be careful with sweeter fruits; they contain high levels of fructose. The most beneficial ingredients are usually found in the skin or seeds and they have a bitter or sour taste. When buying fruit always opt for organic produce, they are the most nutritious and you’ll know for sure they haven’t been stripped of all the nutrients. Keep in mind that fruits contain lots of fructose and should be consumed in moderation. There are certain guidelines as to how much fruit you should eat on a daily basis according to your overall health condition. For example:

People suffering from diabetes are most usually prescribed Metformin, a drug which makes your body more sensitive to insulin. However, recent studies have shown that prolonged use of this drug can decrease the levels of the thyroid-stimulating hormone TSH which can lead to serious medical problems and damage your cardiovascular health. Another study revealed that patients suffering from type 2 diabetes which were prescribed glucose-lowering drugs are at higher risk of death from heart related problems.

If you are suffering from type 2 diabetes you can look up some alternative treatments, these drugs aren’t your only option. You can implement certain lifestyle changes, such as eliminate processed foods and eat more organic food which doesn’t contain artificial sugars and sugar-forming carbs. If you start some high-intensity cardio workout in addition to the diet you will be on the right track to reversing this disease.

Warning about Beta-Blockers and Scientific Misconduct

Beta blockers are drugs aimed at treating high blood pressure and congestive heart failure. They block the neurotransmitters norepinephrine and epinephrine (adrenaline) from binding to beta receptors and dilate blood vessels, lowering your heart rate and blood pressure. It was a common practice in the past for patients undergoing non-cardiac surgery to take beta-blockers, and this practice was even recommended by the European Society of Cardiology (ESC). However, it was recently discovered that this practice, which according to researchers was based on “questionable and probably fraudulent research,” may have been the cause of 800,000 deaths in the past five years in Europe only.

The main reason for the adoption of this practice was a research conducted by a scientist who was fired for scientific misconduct in 2011 and was also the chairman in the committee which drafted these guidelines. The question remains why hasn’t this information brought to light immediately? Why wasn’t anything done? And why did the ESC needed 2 years to withdraw the beta-blocker recommendation? Who knows how many deaths could have been prevented if the revelation had been brought to light immediately.

Even the doctors who knew about this had their hands tied because the guidelines must be respected and there was nothing they could do about it. Forbes reported:

“They write about a culture of neglect in which few if any participants have anything to gain by finding or reporting scientific misconduct. They cite numerous examples in which misconduct has been alleged but the responsible actors– authors, home institutions, journals, and medical societies– have responded in only the most minimal and nonaggressive fashion. The portrait they paint is of a scientific and medical establishment devoted to not rocking the boat.”

There are a million things you can do if you want to improve your overall health and lower the risk of heart attack and cardiovascular disease. The one thing you shouldn’t do is wait for things to take the turn to the worse before doing something about it. If you don’t take immediate action the consequences could be deadly.

Here’s what you can do if you want to prevent heart attack and promote your health:

– Eliminate all sugars, including processed fructose and grains if you are insulin or leptin resistant.

– Eat unprocessed saturated animal fats, they are highly beneficial for you

– Don’t take statins, they have numerous dangerous side effects, while limited benefits. Truth to be told, only the people suffering from genetic familial hypercholesterolemia can benefit from these drugs. This group of people is resistant to lifestyle strategies like diet and exercise.

– Don’t sit for prolonged periods of time. If you can, try to limit the sitting time to three hours a day or less and be more physically active.

– Provide your body with the much needed vitamin D, spend more time under the sun, a tanning bed, or if that isn’t enough take vitamin D3 supplements.

– Reduce your stress daily. You can try the Emotional Freedom Technique (EFT) for stress management. Stress is a contributing factor in a number of diseases, not just cardiovascular ones, so reducing stress can have a positive effect on your overall health.

Content created and supplied by: Boysun (via Opera News )