The Causes Of And Solution To Ulcer

By YoungRexMoss (self meida writer) | 1 months 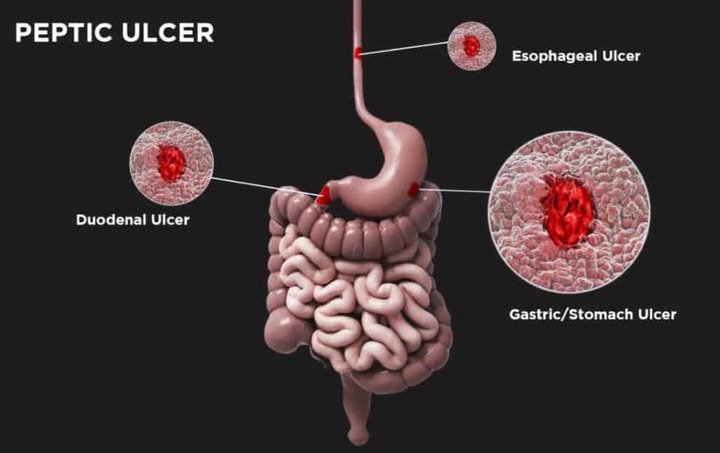 Ulcers are sores(Wound) that are slow to heal or keep returning. They can take many forms and can appear both on the inside and the outside of your body. In the world today, a lot of people develop ulcer due to one reason or the other, in this article am going to share with you, types of ulcer, causes of ulcer and the solution to an ulcer.

Before we go deep into it, I will like to share with you the types of ulcers.

Types Of Ulcer, Causes, And Their Solution

There are three types of peptic ulcers

i. Gastric Ulcer: which form in the lining of the stomach.

ii. Duodenal Ulcer(Stomach Ulcer): which form in the upper small intestine, it usually appears between ages 30 and 50 and is more common in men than women. Stomach ulcers tend to occur later in life, after age 60, and affect women more often than men.

iii. Esophageal Ulcer: are ulcers that develop inside of the esophagus. These ulcers can typically be treated with changes to lifestyle and diet, coupled with certain medications and other treatments.

i. Avoid taking drugs that contain caffeine or aspirin

ii. Eat always(Prolonged periods without food tend to lead to the ulcer)

viii. Medications that protect the lining of your stomach and small intestine.

2. Arterial Ulcer: An arterial ulcer is an ulcer due to inadequate blood supply to the affected area (ischemia). Arterial ulcers tend to occur on the lower legs and feet, and maybe acute, recurrent, or chronic. Ulcers may have multiple contributing factors; these 'mixed ulcers' constitute roughly 15% of all leg ulcers.

i. Restrictions to blood vessels due to peripheral vascular disease.

vii. Arteriosclerosis (hardening of the arteries)

3. Venous Ulcer: are wounds that are thought to occur due to improper functioning of venous valves, usually of the legs (hence leg ulcers). They are the major occurrence of chronic wounds, occurring in 70% to 90% of leg ulcer cases.

CAUSES OF VENOUS ULCER: are caused by poor blood circulation from the legs, such as from venous insufficiency. If this happens, the pressure inside the veins increases. This constant high pressure can gradually damage the tiny blood vessels in your skin and make it fragile.

i. Wear compression stockings or bandages every day as instructed.

ii. Put your feet above your heart as often as possible. ...

iv. Take medicines as directed to help with healing.

4. Mouth Ulcer: These are normally small, painful lesions that develop in your mouth or at the base of your gums. They can make eating, drinking, and talking uncomfortable. Women, adolescents, and people with a family history of mouth ulcers are at higher risk for developing mouth ulcers.

i. using a rinse of warm salt water and baking soda.

ii. placing milk of magnesia on the mouth ulcer.

4. Genital Ulcer: is an open sore located on the genital area, which includes the vulva, penis, perianal region, or anus.

CAUSES OF GENITAL ULCER: sexually transmitted infections, or STIs. These include herpes, syphilis, and chancroid, it may also be caused by inflammatory diseases, trauma, or a bad reaction to skincare products.

Treatment depends on the cause of the ulcers. STIs are usually treated with antibiotic or antiviral pills or shots. If you have an inflammatory disease, you may need a shot or ointment to put on the ulcers. Some genital ulcers go away on their own, but may still lead to more serious infections.

Mothers, Look Hot This Week With Any Of These Ankara Outfits

Ladies, Look Hot And Classy With Any Of These Simple Hairstyles

Have you ever seen a lake filled with pink water, They actually exist, see the reason why its pink