The world youngest mom gave birth at the age of 5 years old.

By Dasliva (self media writer) | 1 year ago

Lina Medina was born in Ticrapo, Castrovirreyna Province, Peru, to parents Tiburelo Medina, a silversmith, and Victoria Losea. She was one of nine children.

Her parents brought her to a hospital in Pisco at age five due to increasing abdominal size. Doctors originally thought that she had a tumor, but they then determined that she was in her seventh month of pregnancy. Dr Gerardo Lozada took her to Lima to have other specialists confirm that she was pregnant. Newspaper accounts indicate that interest in the case developed on many fronts. The San Antonio Light newspaper in Texas reported in its 16 July 1939 edition that a Peruvian obstetrician and midwife association had demanded that she be transported to a national maternity hospital.The paper quoted reports in the Peruvian paper La Crónica that an American film studio had sent down a representative with authority to offer the sum of $5,000 to benefit the minor in exchange for filming. but the offer was rejected. The article noted that Lozada had made films of Medina for scientific documentation and had shown them while addressing Peru's National Academy of Medicine; some baggage carrying the films had fallen into a river on a visit to the girl's hometown. 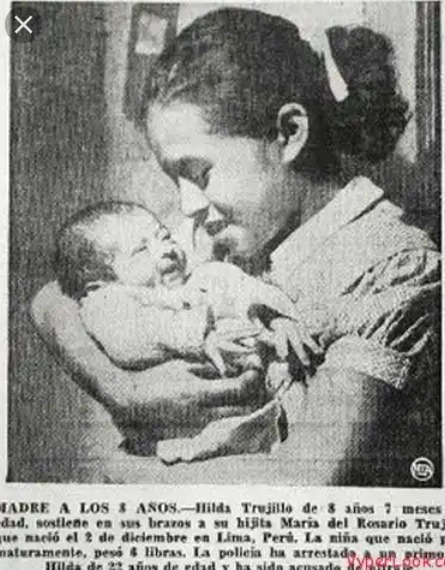 A month and a half after the original diagnosis, Medina gave birth to a boy. She was 5 years, 7 months, and 21 days old, which makes her the youngest person in history to give birth. The caesarean birth was necessitated by her small pelvis. The surgery was performed by Lozada and Dr Busalleu, with Dr Colareta providing anaesthesia. The doctors found that she already had fully mature sexual organs from precocious puberty .Dr. Edmundo Escomel reported her case in the medical journal La Presse Médicale, including the additional details that her menarche had occurred at eight months of age, in contrast to a past report stating that she had been having regular periods since she was three years old.

Medina's son weighed 2.7 kg at birth and was named Gerardo after her doctor. He was raised believing that Medina was his sister, but he found out at age 10 that she was his mother. Medina has never revealed the father of the child nor the circumstances of her impregnation. Escomel suggested that she might not actually know herself, as she couldn't give precise responses .Lina's father was arrested on suspicion of child sexual abuse, but he was released due to lack of evidence, and the biological father was never identified.

Content created and supplied by: Dasliva (via Opera News )