How long does ovulation last on all women?you need to know this to keep from unwanted pregnancy 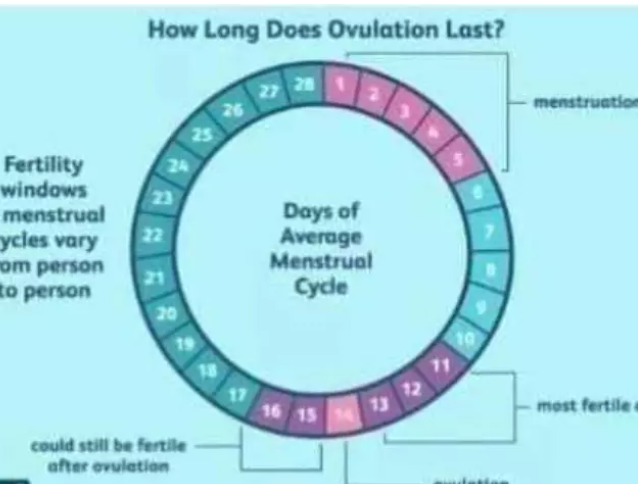 1.A woman has eggs!!! She doesn't need to lay the eggs like chicken. but she has to release it in another part of her body called the fallopian tube. This is called ovulation!

1. Ovulation is the period when your ovarian gland release matured follicle egg into Fallopian tube waiting for SPERM for fertilisation.

2.Women does not release egg simply because of Menstruation but purposely because to attach to men's SPERM and transform to baby.

3.Ovulation normally occur every 14th days of each cycle, Most time when a woman Menstruate on 5th of December, and on the 30th of December, she also menstruate, that doesn't mean she is having period twice in a month. Such woman Menstrual cycle length is 25days cycle. Is a very simple procedure, just start your day count from the first day bleeding to the day before another Menstrual bleeding.

4.Average range of Menstrual cycle length is 28days, which mean any candidate that belong to this cycle length must definitely ovulate between 12th to 16th of her cycle.

7.Those 21days candidate often experience ovulation mucus during menstruation,likewise often develop orgasm while they are menstruating. In general, they have similar ovulation symptoms that 28days and 30days candidate have.

8.Any woman with 35days which is long Menstrual cycle length could also ovulate between 12th to 18days of cycle.

9.All woman should aware that without ovulation,the chance of Pregnancy is low.

10.If your Menstrual date keep on changing every menstrual cycle, that doesn't mean you are having irregular Menstrual cycle. Most of the woman get confuse of this situation.

11.If you really want to figure out your menstrual cycle length, you need to focus on date you had your period at least good three month, Get yourself calendar and start cycle the first day Menstrual Bleeding, cycle the day you also see another period bleeding. Make your estimation on numbers of days in between the first day bleeding to the day before you see another Menstrual bleeding. OR BUY AN OVULATION PREDICTOR KIT.

most of the woman get confused toward Cervical mucus, if you have never see any cervical mucus in your private part, that doesn't mean you are not ovulating but you must ensure one or two sign and symptoms of ovulation occur on you.

Ovulation is the period to get pregnant no matter how much your HORMONE and uterus is healthy. You can follow up your ovulation period avoid unwanted pregnancy.

How To Know If You Have Cholera And Its Causes

5 nutritious foods that can boost your immune system