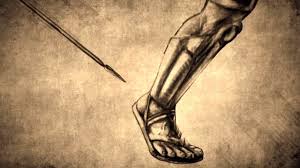 Today, we use the phrase “Achilles heel” to describe a powerful person’s fatal weakness. An Achilles heel is a weakness in spite of overall strength, which can lead to downfall.

The warrior Achilles is one of the great heroes of Greek mythology. According to legend, Achilles was extraordinarily strong, courageous and loyal, but he had one vulnerability, his “Achilles heel". According to myths and stories composed, when Achilles was a baby, it was foretold that he would die young. To prevent his death, his mother Thetis was extraordinarily concerned about her baby son’s mortality. She did everything she could to make him immortal: She burned him over a fire every night, then dressed his wounds with ambrosial ointment; and she dunked him into the River Styx, whose waters were said to confer the invulnerability of the gods. However, she gripped him tightly by the foot and dipped his body into the water; However, as Thetis held Achilles by the heel, water never touched his heel and as a result his heel was not washed over by the water of the magical river. Achilles was invulnerable everywhere but there. Achilles grew up to be a man of war who survived many great battles. Achilles was killed at the battle of troy by an arrow shot by Trojan prince Paris. The god Apollo is said to have guided the arrow into his vulnerable spot, his heel. The city of Troy was later captured by the Greeks and its inhabitants killed or enslaved.

As an expression meaning area of weakness, vulnerable spot, the use of Achilles heel dates only to 1840, with implied use in Samuel Taylor's "Ireland, that vulnerable heel of the British Achilles!". What is known today as the Achilles’ heel, is a strong, wide, and thick tendon that plays an important role in the biomechanics of the foot. The heel enables standing on the toes, walking, running, and jumping. Two arteries carry blood to the heel, the peroneal artery and the tibialis posterior artery, that descend behind the external and internal malleolus. The tendon has no blood vessels of its own. The large and prominent tendon of the gastrocnemius, soleus and plantaris muscles of the calf is called the Achilles tendon. This is commonly associated with the site of Achilles’ death wound. Tendons are avascular, so such an injury is unlikely to be fatal; However, the myth has the arrow was poisoned with the blood of the Hydra. A more likely anatomical basis for Achilles's death, assuming an unpoisoned dart, would have been an injury to his posterior tibial artery in between the tendons of the flexor digitorum longus and the posterior tibial vein. This area could also have been included in Theti's grip.

Content created and supplied by: Ukpabio19 (via Opera News )